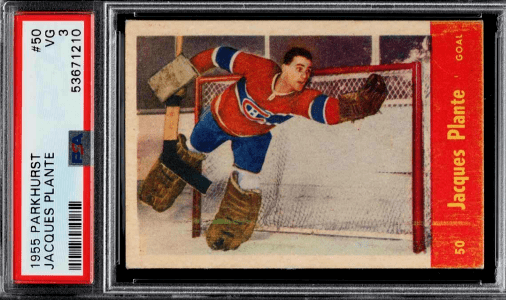 The first goaltender to regularly wear a mask, Jacques Plante (1929-1986) has always been a top-rated investment when looking at his rookie cards.

An integral part of the powerful Montreal Canadiens team that won a record five successive Stanley Cups (1956–60), he revolutionized the sport for future generations.

Here’s a rundown with three of the best Jacques Plante rookie cards on the market right now, along with an outlook for the next few years.

There are a number of early 1950’s Plante cards, but which ones are worth keeping an eye on?

Here’s everything you need to know about some of his best early cards, while we’d always recommend options wrapped in a PSA sleeve. 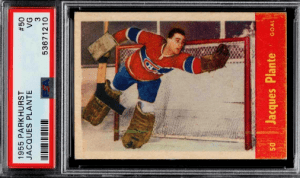 The undisputed king of Plante collectibles has to be the 1955 Parkhurst RC, which also comes with an interesting parallel of sorts.

Everything from the colored image to the red tab at the bottom causes it to pop compared to the drab alternatives, although that does lead to issues relating to the overall condition.

It features an illustrated likeness of the goaltender as he stretches to make a save.

In 1955-56, Quaker Oats issued a set that is virtually identical to the Parkhurst collection.

The only differences are the distinctive greenbacks and a Quaker Oats advertisement in place of the ‘Did You Know’ tip on the back of the card.

The Quaker Oats version is even rarer than the Parkhurst card. 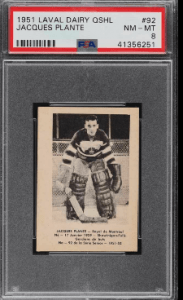 The Quebec Senior Hockey League is where Plante found himself in 1951.

A reserved design sees a simple black-and-white profile photo set against a thick white border, with basic stats listed in French at the bottom in plain text.

You’ll also find a black reverse, which was fairly common at the time.)

As for the name, the set is commonly known as Laval Dairy, but research shows that it was produced by Bedard and Donaldson, Ltd.

“In any case, the set is a rarity, with gaps in the checklist, and few copies remaining in the present day.” 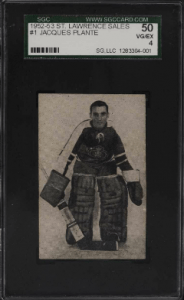 The final card to make the list was released in 1952.

St. Lawrence Sales is another niche set compared to Parkhurst, but it contains another early Plante RC.

Once more, there’s a simple black-and-white profile photo of the player in full gear, with a plain background and no hard border.

The reverse contains the card number, as well as a brief roundup of the player in French.

There’s no denying that “Jake the Snake” is an interesting player from an investment perspective.

He would often leave the net behind to intercept the puck, innovating with a style that shaped the careers of many future goaltenders.

Plante would also bark orders at his teammates, as he understood that he had the best view of the game from his position.

He has a unique story, while the Parkhurst RC is one of the best hockey cards from the decade.

As they’re from the 1950s, we’d opt for graded versions of any of the options mentioned above. However, they’re likely to be difficult to find at higher grades.

The same grade sold for less than $9,000 back in 2013, highlighting the potential for a decent ROI.