Jacob Degrom’s rookie card values are somewhat undervalued based on future performance, and MLB accolades that we feel are just over the horizon. His most profitable RC in terms of future ROI is the 2014 Topps Chrome Update RC #MB-19 or the 2014 Bowman Chrome Prospects RC #BCP73. 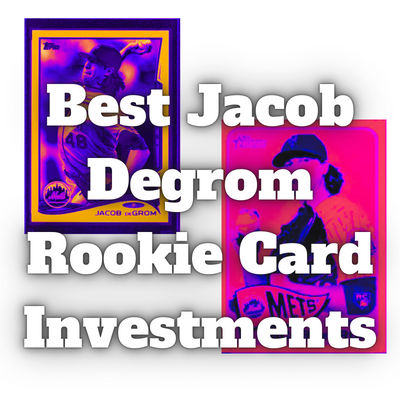 It took him a while to make it to the MLB (debuting on May 15, 2014, at 25), but he lit it up. In his first year, he finished with nine wins and six losses with a stellar 2.69 ERA to go along with a mind-numbing 144 strikeouts and has a rookie of the year trophy above his wood-burning fireplace.

The only negative about this kid is how long it took him to make it up to the show. Most prospects make it up before age 21 (22 at worse). It took DeGrom until almost age 26 to show up due to injuries (precisely due to Tommy John’s surgery). But once he made it, he made the most of it and is now a front-line ACE!

Let’s look at the top-rated deGrom rookie cards regarding return on investment. 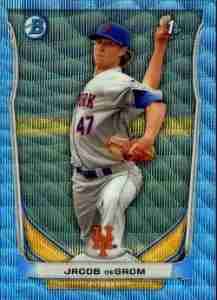 The boss of all Jacob DeGrom rookie cards regarding future return on investment. The card shown above is a refractor version of the base card which should also have a fantastic ROI in the long-term as long as Mr. DeGrom keeps projecting down the path we suspect he will. 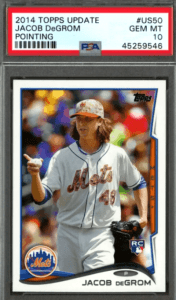 We love the rare SSP DeGrom Topps “pointing” rookie card. Not only does it make for an excellent long-term investment, but we feel the image is super unique and will help the value only increase over the upcoming years.

The card is #US50, and the back reads, “Jacob created a buzz with his fine pitching in 2014, but what he did with the bat spurred a genuine commotion. The former college infielder lost his debut 1-0 but snapped a Mets pitcher 0 for 64 to start the season with a single in his first at-bat.”

We have bought a number of these and will look to buy more.

The DeGrom Bowman Prospects card is numbered #BCP73 and shows Jacob firing the rock to home plate in what we can only assume is a significant swing and WHIFF.

Available in several parallels this card is another strong buy for us, and we own a number of the higher-end parallels. 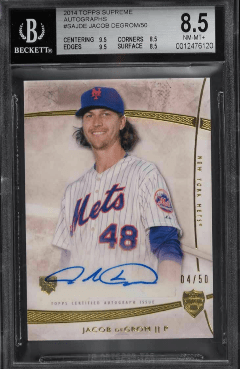 The Topps Supreme Jacob DeGrom rookie card is a solid high-end autograph investment and should have a great ROI as DeGrom advances. 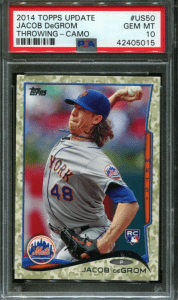 Here is the standard DeGrom Topps Update rookie card of him throwing the ball. Not an SSP (super short print), but still a great long-term play. 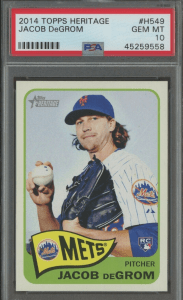 Finally, the Topps Heritage Jacob DeGrom RC is best for collectors with a smaller bankroll. The card is affordable and shows DeGrom holding the baseball while looking back at the collector with a goofy grin. 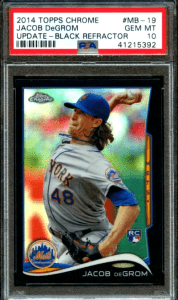 We usually don’t load up on pitchers, but we bought a few of DeGrom’s rookie cards within the last 12 months.

Although we don’t see the Mets winning a title anytime soon, we think they are loaded for bear on the pitching side of things (at least the top half of the rotation) and will be led by DeGrom.