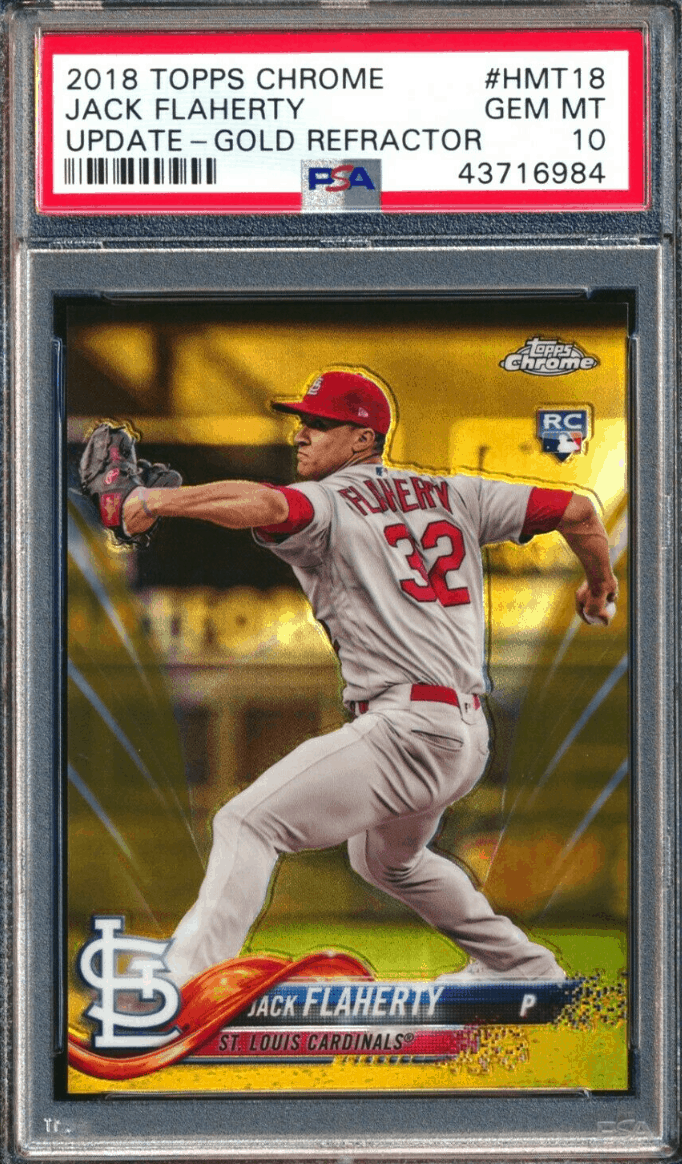 Jack Flaherty was drafted by the St. Louis Cardinals with the 34th pick in the 1st round on the 2014 MLB Draft… he is turning out to be one of the best picks in the entire draft and is once again showing the league why the Cardinals are constantly in the MLB Playoffs and never seem to have a down season.

This hard work and dedication to improving his craft are what makes Flaherty one to really watch over the next 3 to 5 years.

We think he could rise to the level of a Kershaw and maybe better (yes he is that good).

His 2019 post-All-Star break numbers were absolutely mind-blowing and NOW is the time to get in on Jack Flaherty RCs before they blow up and reflect just how good of a pitcher he truly is.

Here are the best Jack Flaherty rookie cards you will want to target for your investment portfolio. 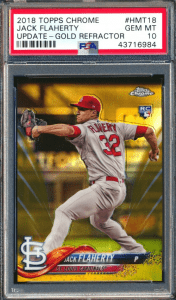 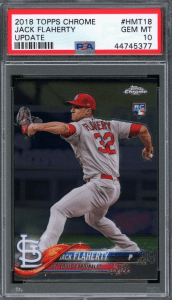 This card shows Flaherty on the mound delivering what we can only assume to be a strikeout pitch.

The 2018 Topps Chrome Update Jack Flaherty card is numbered #HMT18 and the back reads “Watching Jack’s bold approach has been a pride and pleasure for the Cardinals. Fearlessly challenging hitters with four pitchers, the 21 years old stormed through the minors and worked in the 2017 Sirius XM All_Star Futures Game before making his MLB debut on September 1.” 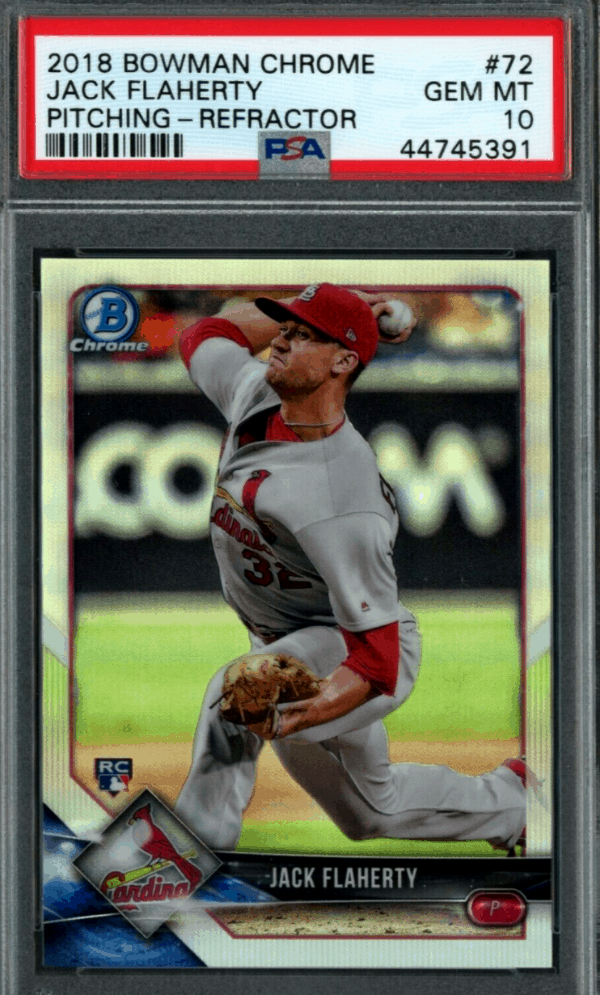 Another Flaherty Rookie Card with him on the mound firing the ball to the batter. 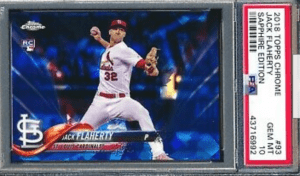 The card depicts the Topps Chrome logo in the top right-hand corner with the rookie card (RC) beneath.

The bottom left of the card strongly depicts the STL logo along with his name (Jack Flaherty) and position from left to right… a strong, STRONG CARD for collectors who believe in a bright future for Mr. Flaherty. 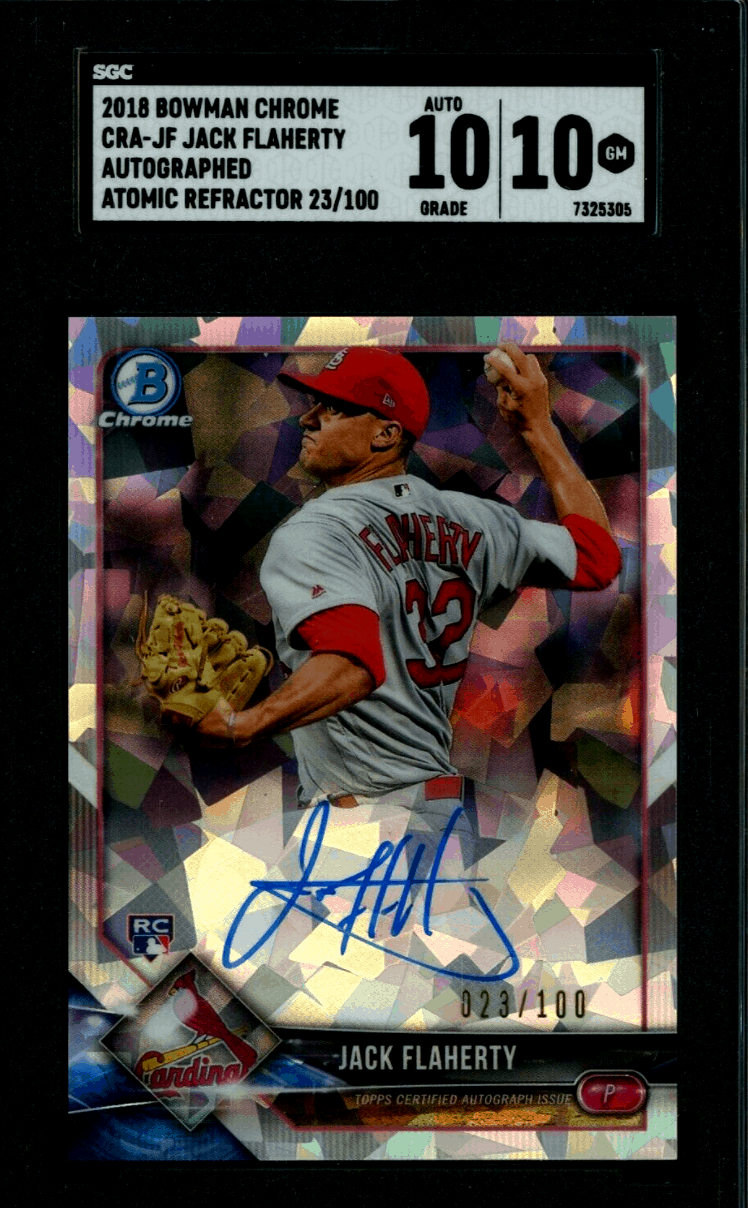 The value of Flaherty rookie cards is undervalued based on his potential ceiling.

If you have a Flaherty rookie card and would like an estimated price please email us at value@goldcardauctions.com… include a minimum of 2 photos.

Thinking about buying a Jack Flaherty rookie card? Want advice before making the purchase? Please email us at advice@goldcardauctions.com and provide a link to the card in which you are purchasing.

Or for any questions hit his up the Gold Card Auctions Facebook Page!

As we mentioned in the opening we think he could rise to the level of a Kershaw and maybe even better.

We consider all Flaherty rookie cards to be extremely undervalued.

Unfortunately for Cardinal fans, Flaherty has made it almost certain he will not be playing for the Cardinals after 2023 as he will be asking for max money and that is something the Cardinals don’t do.

Hopefully, the Cards can get a World Series MVP and a CY Young from Flaherty before he bolts town for New Tork or Los Angeles… at any rate, someone will be getting a stud pitcher in the prime of his career.