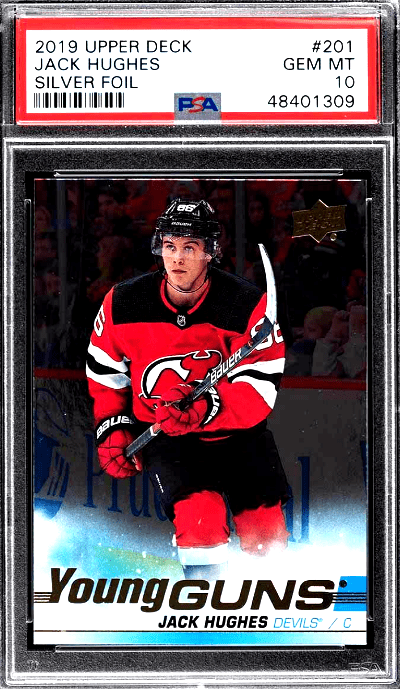 Jack Hughes Rookie Year Stats: 61 games, 7 goals, 14 assists, and a plus-minus rating of -26. Not the best looking stats from a number one pick but remember he was literally only 18 years old and the New Jersey Devils were one of the worse teams of all-time.

Hughes has incredible speed, quick hands, makes smart decisions, and a slap shot that will knock your socks off.

Let us take a look at the top-rated Jack Hughes rookie cards that will have a chance to fatten your wallet or bank account. 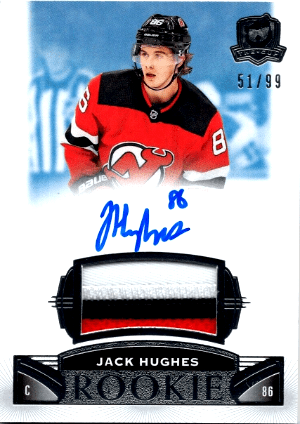 If Jack Hughes turns out to be a top 20 or 30 player of all-time this card will be worth the cost of a home mortgage. The Upper Deck The Cup RPA Jack Hughes rookie card is numbered #66 and only 99 of these bad boys were printed.

His name sits towards the bottom center just above the word “ROOKIE” in all caps. The game used patch is just above his name and the auto finds its home just above the patch. Hughes is pictured, upper body only, looking for a pass while sporting his red Devils uniform. 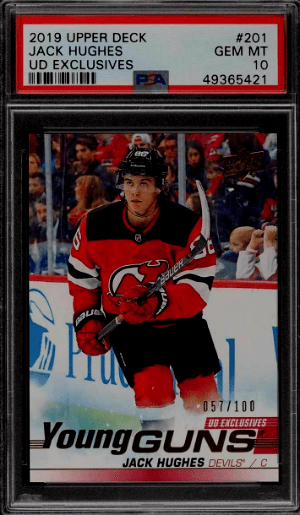 This list wouldn’t be legit if it didn’t have the Young Guns rookie cards on it. The 2019 Jack Hughes Upper Deck Young Guns Exclusives rookie card is numbered #2201 and only 100 of them were made.

A great-looking card as we have come to expects nothing less from the Young Guns brand. Hughes is pictured heading up ice with a determined look on his face that seems to say “bring it on biatch”.

His name is center towards to bottom with his team name and position behind it in line. The words Young Guns Exclusives sit above his name in larger caps… red and black graphics are sprinkled throughout.

Another hard-hitting UD Young Guns card is next on our list. This time the Young Guns FOIL version with the only real difference being slight variations in the photo and then off course the number made. 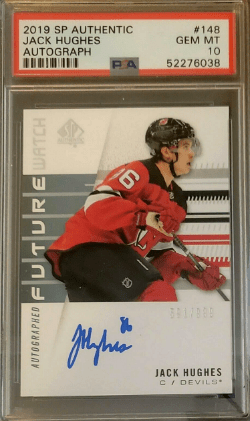 Last on our list is the 2019 SP Authentic Future Watch Auto Jack Hughes rookie card. Numbered #148 the card shows Hughes rushing up ice on what looks like a would-be scoring chance.

This card is moderately price and shouldn’t break the bank at high levels but won’t cost a few weeks allowance either. 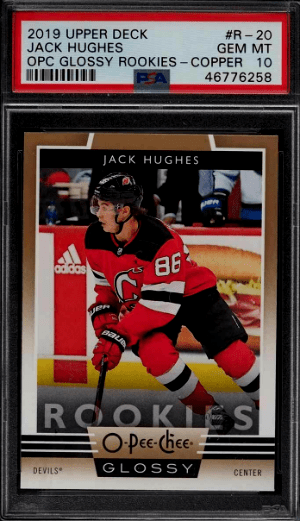 Not only is this Jack Hughes RC super affordable for every price range but it’s also pretty damn sexy look wise and it’s made by O-Pee-Chee (we have a thing for OPC).

The 2019 Jack Hughes UD O-Pee-Chee Glossy Copper rookie card is numbered #R20 and is a perfect mix of affordability and a good to great ROI (assuming Hughes lives up to his lofty expectations).

His name is centered at the top while his team name is positioned in the bottom left and his position (Center) sits in the bottom right. If your a Jack Hughes fanboy, believe he is the next great one, and have a tight budget this card has your name written all over it… BUY BUY BUY! 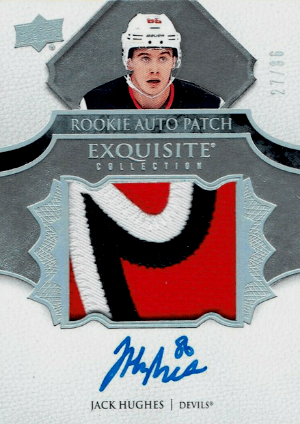 Looking to purchase a Jack Hughes hockey card but need advice? Email us at advice@goldcardauctions.com, make a comment below, or hit us up on the Gold Card Auctions Facebook Page.

Looking for an estimated value of your Jack Hughes card? See the information above but add value@goldcardauctions.com (and include photos of the card in question). 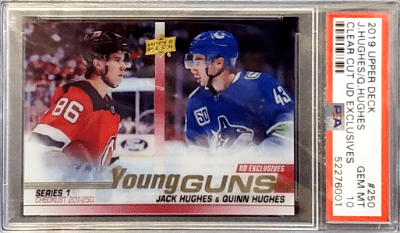 Jack Hughes being a number draft pick has a lot to live up to and especially in the hockey card world. Being the first overall selection has catapulted the value of his rookie cards much higher than they should be based on his actual stat line, but that is to be expected.

The question is can he improve that stat line, and DRASTICALLY because right now it’s not looking all that great. BUT please keep in mind he is still only 19 years old (20 in May) and it is much too early to make any type of final judgment.

Honestly, we’re not sure which way it’s going to go… were thinking it’s a 60/40 type scenario… 60% chance he performs at a high level and is the next hot young player, 40% chance he is a flop, or just an average player or slightly above.

What do you think? Will he be the next big thing, flop, or somewhere in between… comment below. We are sheepishly passing on Jack Hughes for now but may very well change that opinion.