Isiah Thomas is one of the greatest point cards in the history of the NBA. He played his entire career with the Detroit Pistons and played at a time when they experienced a lot of success. 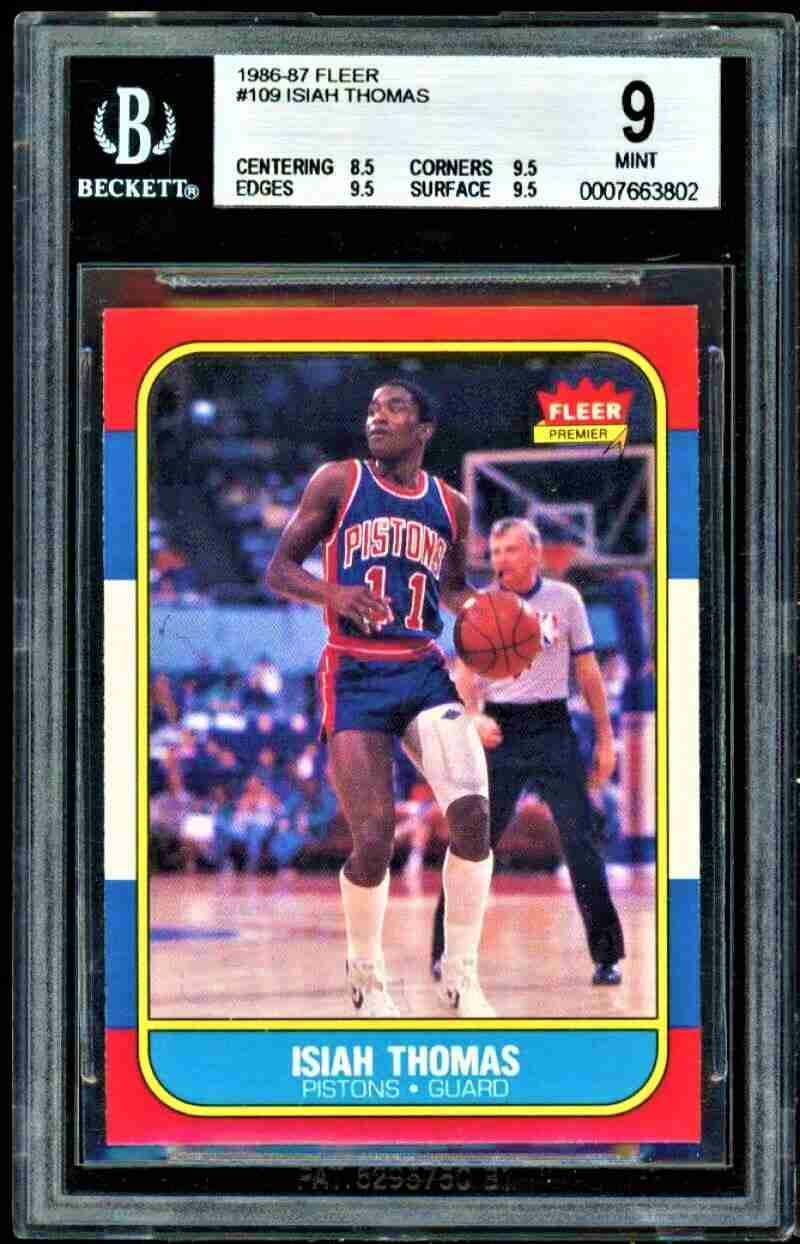 Isiah Thomas started his career the year he got drafted 2nd overall by the Detroit Pistons. He immediately established himself as one of the premier point guards and playmakers in the game.

On top of that, Thomas was an all-star in 12 of his 13 seasons, only failing to make an all-star team in his final season.

Unfortunately, his career was cut short after he tore his Achilles tendon on April 19th, 1994. Rather than attempt a comeback, Thomas opted to retire a month later.

It is inarguable that Isiah Thomas is one of the greatest point guards in the history of the NBA.

He had a tremendous amount of success despite playing at the same time as Larry Bird, Magic Johnson, and Michael Jordan. Unfortunately, Thomas did not join the NBA at an ideal time for collectors.

His rookie year was the final season Topps released rookie cards for several years, and unfortunately, Thomas was not included in the collection.

As a result, Thomas did not have an official rookie card. In fact, his first trading card was not released until the 1983-84 season. However, Fleer did release an official Isiah Thomas rookie card several years into his career.

Since Thomas’s cards have a distinct story to them, they hold extra value in the minds of collectors.

As we mentioned above, Isiah Thomas did not have a rookie card released in his first season. So, we are not going to exclusively look at rookie cards today.

We will look at the official Isiah Thomas rookie card released by Fleer, but we will also look at the first trading cards of his that were released. We hope that you find what you read here useful and informative.

As we mentioned above, Isiah Thomas did not have an official rookie card released in his first NBA season.

Thomas was a victim of his time, and that was a time when trading card companies were in flux.

Before the start of his sixth season, Fleer released the only official Isiah Thomas rookie card.

The card shows Thomas as he makes his way up the court with the basketball.

He is wearing a blue pistons jersey and shorts, as well as a brace on the top of his left leg.

The back of the card shows Thomas’s stats through the first five seasons of his career. Additionally, it lists his date of birth, height, weight, and college.

While this card has value with collectors, it is not as valuable monetarily due to the nature of its release. Most people that are interested in cards from this time want Michael Jordan rookie cards. Furthermore, these cards can be found at budget prices.

Although it is not a rookie card, this card from Star is the closest you will get to one other than the card listed above.

Although it was released before the start of his third season, it was the first Isiah Thomas rookie card released to the public.

The card shows Thomas in his blue Pistons gear as he gets ready to take a free throw. The Detroit Pistons logo is in the bottom left corner of the card.

Finally, the back of the card tells you where he played in high school and college, and the position he was drafted. You can also see his stats from his first two NBA seasons.

This card is not as popular as either of the two options above, but it is still a solid option. It shows Thomas taking a shot in a crowded live-action shot.

The card was released prior to Thomas’s 4th NBA season, and it shows a candid look at the game. The action-style shot on the card is what gives it value.

Most cards display the player in an unexciting part of the game, but that is not the case here. Here, you can see Thomas in a crowd and in his element.

Isiah Thomas is a legend of the game, and as a result, you would expect his rookie cards to be very valuable. Unfortunately, Thomas does not have a rookie card from his first season.

While he had a rookie card released several years later, it does not hold the same value as it would if it were released at the right time. However, these cards can still be sold for significant prices at auctions.

If you have an Isiah Thomas rookie card and you want to get its estimated value, you can contact us. Send us an email or leave a comment below!

Rookie card investment is usually best to do when a player is still young.

If you purchase a rookie card when a player is in their rookie season, you can make a significant return on your investment.

Unfortunately, that is not the case with older players. Instead, you are likely to sell your card for a similar amount to what you bought it for.

Since you will be selling your Isiah Thomas rookie card at an auction, there is a chance that you could turn a profit, but it is not guaranteed.

It is an expensive purchase that does not have a guaranteed return on investment. It is better to purchase this card if you want to add it to your collection.

How Much is an Isiah Thomas Rookie Card Worth?

The price of every card is largely dependent on its condition. Cards in good condition can be worth $4000 or more, whereas cards in poor condition can cost less than $40.

What Year is Isiah Thomas's Rookie Card from?

Although he debuted in the 81-82 season, his rookie card wasn't released until the 86-87 season.

What Teams Did Isiah Thomas Play For?

Isiah Thomas spent his entire career with the Detroit Pistions. He won two championships during his tenure with the team.

Is Isiah Thomas in the Hall of Fame?

Yes, Isiah Thomas was elected to the Hall of Fame in 2000, his first year of eligibility.