Whether you want to buy rookie cards for your hobby collection or to make money in the long run, Albert Pujols’s rookie cards are an excellent choice, especially as he nears his retirement. Alber Pujols is one of the top baseball players for the last two decades. 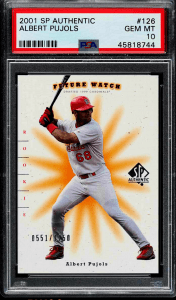 Update: Originally published in March 2020. Since then Pujols rookie cards are up on average 200%.

It was 2001 when he first entered the stadium representing the Cardinals and hit his first home run in the Majors.

Last year, when he crossed over 3,000th hit against the Mariners, he left many big names behind in the record book. His current hits are now 3,200+, granting him a place on the list of legends in the game.

What’s even more startling? His career is not over yet, so you can expect further jumps under different categories.

With his impeccable stats, records, dozens of awards, and achievements, Albert Pujols is going to be held as one of the greatest players of all time since he started back in 2001. For collectors and investors, Albert Pujols makes for a great player to invest in for long-term returns.

To explain why his cards are a great investment, let’s discuss his bio and take a look at the endless achievements that guarantee a jump in the value of his cards when he retires.

Born January 16th, 1980, 40 years old, Albert Pujols is without any doubt among the greatest players of baseball with several awards and records to his name throughout his career. The two- times World Series Champion was born and raised in Santo Domingo, Dominican Republic.

As an only child, Albert was raised by his father, who was also a softball pitcher, and his grandmother. The family migrated to the United States in 1996 and settled in Missouri with relatives.

When in high school, Pujols started representing his school and won the All-State Athlete award twice. Based on his performance as a baseball player, he was given a baseball scholarship by Maple Woods Community College in 1998.

It was his first college season performance that made him known in the baseball circles, and the next year he entered the MLB draft for the first time.

In 2012, in a surprising move for many, and heartbreak for Cardinals fans, he joined Los Angeles Angels under a ten-year contract and a whopping $240 million deal. He is still playing for the club, with a couple of years to go until his contract ends.

After almost two decades playing for MLB, Albert Pujols was the third oldest player in the 2019 MLB season. Although it has not been announced yet, his retirement is just around the corner.

In one of his recent interviews, he claimed he intends to complete the 10-year contract with Los Angeles Angels, worth $240 million. So we can expect two more seasons.

After that, there’s a strong chance he’ll take up retirement.

Just like other big names in the game, it is expected that the value of his rookie cards will surge when he retires as one of the biggest veterans of the game.

Will Investing in Albert Pujols Rookie Cards Be Profitable?

A few years from now, there is no doubt that Alber Pujols will be a Hall of Famer. With his game statistics and all the awards backing him up, he is going to become one of the greatest legends of all time after his retirement.

We strongly believe that the value of his cards is going to increase exponentially the moment he retires. It is a proven pattern that anytime a legend in the game retires, game enthusiasts regard him in high esteem and this drives up the value of his cards. The same is going to happen for Albert Pujols. In fact, as he approaches retirement age, this is already proving to be true. I’ll show you how in a minute.

But the bottom line is this, Albert Pujols cards are a strong BUY right now. In fact, we’re investing a decent amount of money into his rookie cards based on him being an all-time great and 1st ballot Hall of Famer.

As always, it’s important to do your research and not invest in a card solely based on someone’s advice. So, take a look at the reasons why we think Albert Pujols cards could give you fantastic returns in the future:

Reason #1: His achievements are exceptional.

Let’s take a look at the biggest achievements of this legendary player to understand why his rookie cards are so undervalued right now.

Clearly, there’s no doubt that very few players in the game can match up to the amount of recognition that Albert Pujols has received.

It isn’t a stretch to say that the 2000-09 decade pretty much belonged to Albert Pujols.

And achievements like this don’t go unrewarded. When Albert Pujols retires and the market realizes the sheer number of awards in his name, they are quickly going to factor this into the value of his cards.

Reason #2: His rankings and stats qualify him as one of the top 10 players of all time. 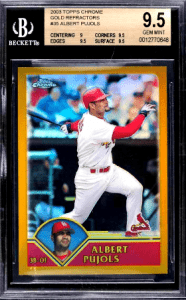 I’ve always told you how last year when he crossed over 3,000th hit against the Mariners, he left many big names behind on the record book. His current hits are now 3,200+, granting him a place on the list of legends in the game.

With 656 home runs by the end of the 2019 season, he is ranked 6th on the list of most home runs by a player in MLB history. With an amazing record, the ten-time All-Star and three-time MVP player is without any doubt among the greatest MLB players of all time.

In addition to a 3000 hit club and 600 home run club, he recently also joined the small league of players with 2000 RBIs.

If you compare the Pujols career with some of the greats in the game on the records table, like Ernie Banks, Willie Mays, and Barry Bonds, you can either find him ahead or in the same league.

Here is a quick summary when it comes to record books. Pujols currently ranked among the top ten players in MLB history under four categories that include:

These stats and rankings easily put him in the list of the top 10 players of all time. And the market is going to price this into the value of his cards.

Reason #3: The value of his rookie cards is already going up.

Albert Pujols is currently 40 years old and is nearing retirement age. He is tied into a 10-year contract with Los Angeles Angels and has two years left until his contract ends. While we can expect at least two more seasons, there’s a chance that he’ll take up retirement after that.

The market is already taking note of this.

Take a look at this graph…

As you can see, the trading volume of his cards has gone up by almost 50 times in the past year. This represents a HUGE increase in demand for his cards. And this demand is set to increase prices in no time.

All of this is happening because sports card investors and game enthusiasts are finally taking note of his achievements and stats and are factoring it into their valuation.

Some of his cards are also selling for four and five figures. For example, the 2001 SP Authentic Future Watch rookie card is available within the range of $2,500 to $5000 on eBay, while the 2001 Bowman Chrome Autograph Refractor Rookie Card is being sold anywhere from $16,000 to $84,000.

It’s best to jump in on this opportunity before the value of his cards goes up anymore.

Remember, the longer you wait, the more money you leave on the table.

I’ve shown you the reasons why Albert Pujols cards are a strong buy right now.

As a hall of fame player, with several records and awards to his name, he is among the top 10 or even top 5 players under different MLB statistical categories. With his retirement time just around the corner, his rookie cards are expected to increase in value, as he will go as a legend of the game in the record books.

Now, it’s upon you to make use of this excellent investment opportunity and add an undervalued card to your portfolio right now. The returns could be impeccable a couple of years from now.

In fact, we’re investing a good amount of money into his cards ourselves.

If you’re wondering which cards to invest in, you can find a detailed report on the topic here. Feel free to go through our archives for more reports, analysis, and Q&As.

Albert Pujols rookie card year is 2001. That year he won rookie of the year with the St. Louis Cardinals.

What is Albert Pujols baseball card worth?