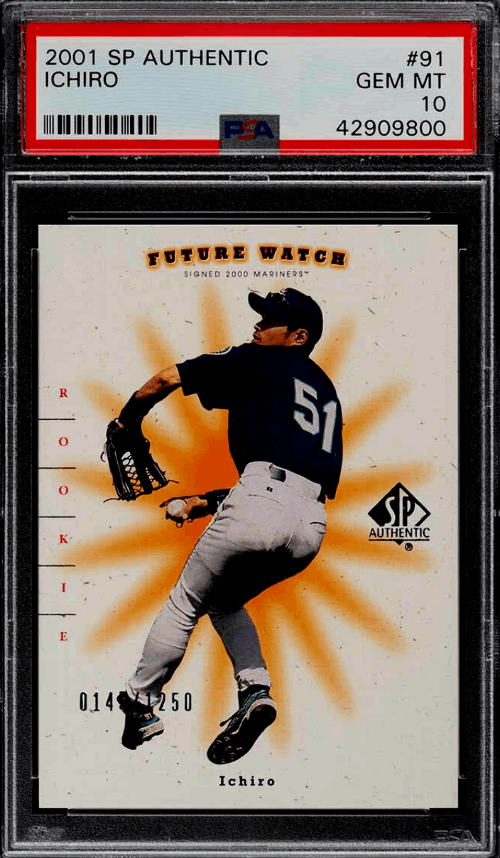 His first year in the majors may have been his best as he batted a mind-blowing .350, won the AL MVP, and Rookie of the Year (the only other player to win both the MVP and ROY was Fred Lynn in 1975).

Imagine how sick his MLB career numbers would have been having he entered the league at the age of 19 instead of 27.

The Ichiro SP Authentic RC is our top pick when it comes to Ichiro rookie cards in terms of ROI (not to mention the card design is on point).

Numbered #91 only 1,250 of these cards were printed. The name simply reads “Ichiro” which is printed at the center bottom with the SP Authentic logo slabbed on the middle right hand side. The word “FUTURE WATCH” is printed at the top center.

The photo itself depicts Ichiro hurling the ball back into the infield while decked out in the dark blue Mariners jersey with a gold/yellow-looking asterisk in the backdrop. 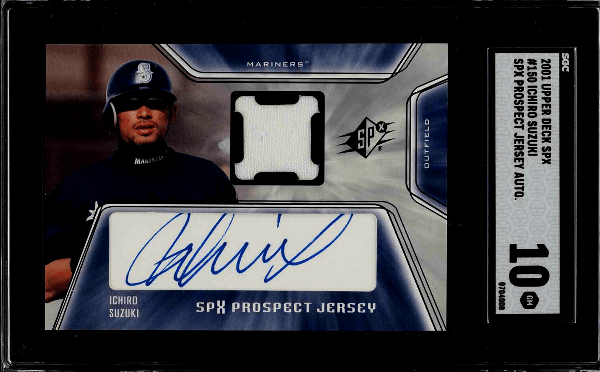 The 2001 Ichiro SPx Signed Jersey card is another heavy-hitting Suzuki rookie card that is right up there with the SP Auth in terms of ROI and comes with a hefty price tag.

Numbered #150 the card provides a game-worn patch that is placed in the dead center of the card and a Suzuki autograph just below the patch.

His name is just below the auto to the left and the SP Logo is depicted towards the top right corner.

The photo of Ichiro is simple in nature as it shows Ichiro removing his batting gloves after a slap gap double. 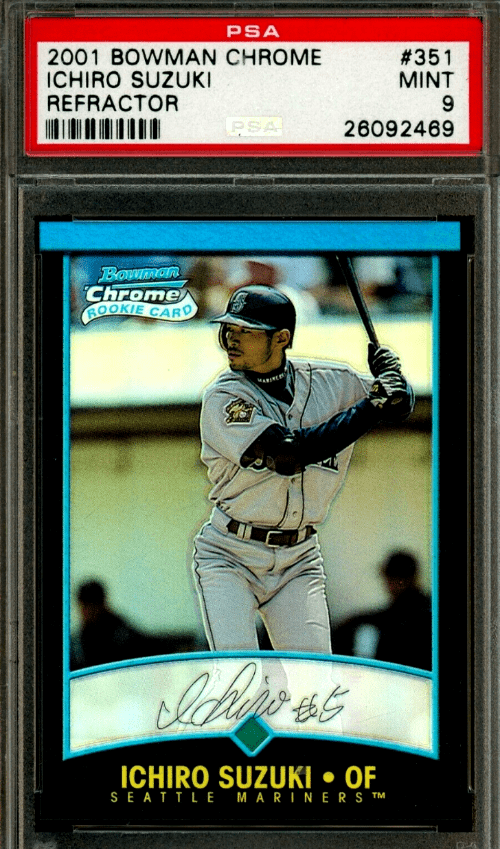 Bowman is making an appearance on our list and is hitting hard with the 2001 Bowman Chrome Refractor rookie card.

This Bowman card is the only Ichiro rookie card on our list that depicts him at the plate ready to slap one down the third baseline. Numbered #351 his name is printed at the bottom of the card in yellow ink with Seattle Marines underneath and his position (OF) behind his name. The Bowman Chrome RC is placed in the top right-hand corner.

SOLID CARD and a SOLID ROI. 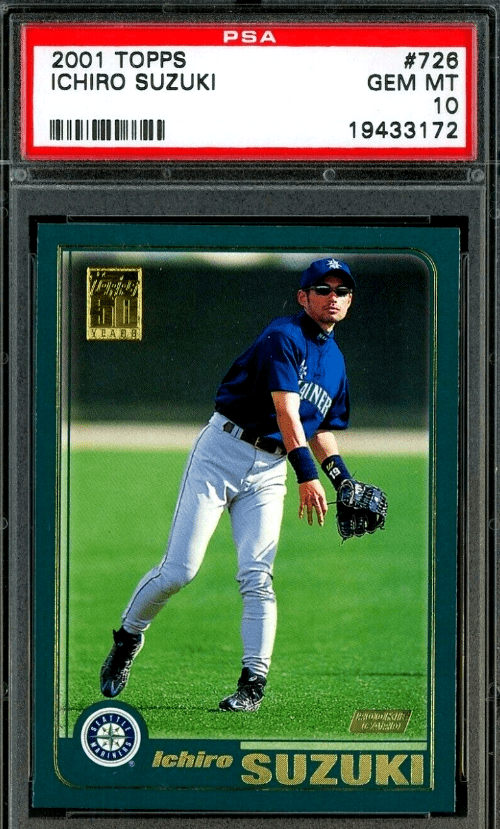 Please note the 2001 Topps Ichiro Suzuki rookie card and the 2001 Topps Chrome Traded Suzuki RC are pretty much the same cards besides a few slight differences.

The Ichiro Topps rookie card is an ideal pick for collectors looking to profit from Ichiro rookie cards without having to spend an arm and a leg.

Numbered #726 the card shows Suzuki tossing the baseball around in what looks like pregame warm-ups.

His name is printed at the bottom of the Topps card just off-center to the right while the Seattle Mariners logo is depicted in the bottom left-hand corner and the words “rookie card” are shown in gold above his name. The Topps 50th Year Logo is gold in color and is placed in the top left-hand corner.

The simple nature of the card is what we really dig (but not so simple it’s boring… yes it walks that tight line). 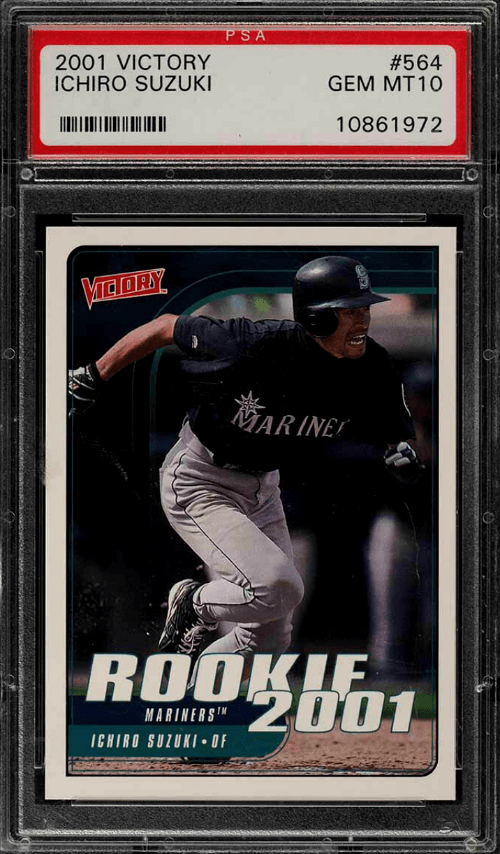 The final Suzuki rookie card on our list is from Upper Deck and is numbered #564.

Ichiro is running like he is being chased by the BIG BAD Wolf in what we imagine is a successful stolen base attempt… SAFE! The look on his face is priceless and shows just how hard Ichiro played the game.

Popular: 5 Times Baseball Cards Worth Millions Were Found In Homes

The word “Rookie 2001” is placed towards the bottom of the card in big, white, bold letters while his name is placed in the bottom left-hand corner along with his position (OF). The word victory is slabbed in the top right-hand corner in red (not really sure what the word Victory being shown is all about but we bet a reader will enlighten us in the comments section 🙂 ).

Another budget-friendly Suzuki rookie card that won’t cost an arm and a leg (even at high grades).

While this card didn’t quite make our list of the top five mentioned above, it’s still a strong option that is worth a look at for many investors. 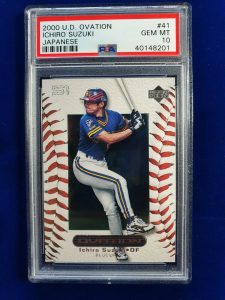 This card shown above is another Ichiro Suzuki rookie card that should be of interest to investors.

It has an interesting design with the baseball seams on either side of an image of Ichiro, who is mid-swing.

This one pictured above is a Japanese version which helps the value even more and makes it more of a collector’s item, as well as a stronger investment. 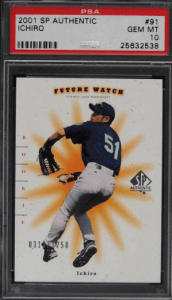 “Ichiro rookie cards seem to be a tad undervalued based on his career numbers which are absolutely mind-numbing (at the age of 42 he batted .291!)”

Please email us at value@goldcardauctions to obtain an estimated value of a Suzuki rookie card or hit us up at advice@goldcardauctions.com if you are in the market for an Ichiro rookie card and would like some advice based on your budget. You can also holla us on the Gold Card Auctions FB Page. 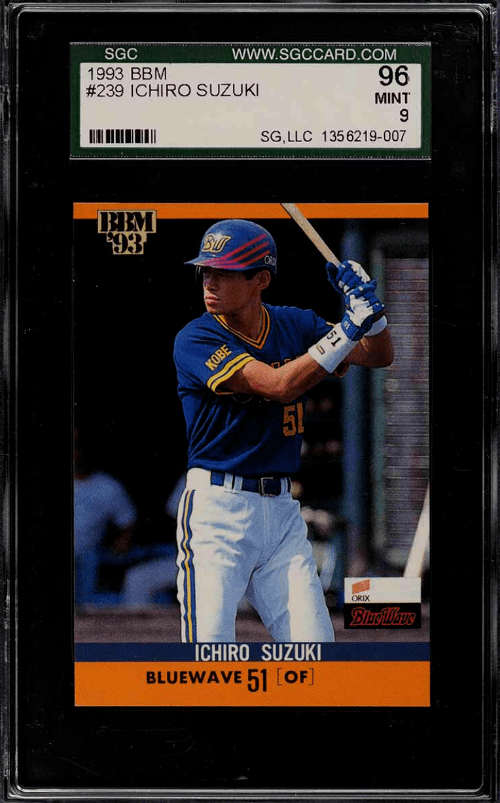 As we alluded to earlier we feel Ichiro rookie cards are somewhat undervalued based on how great of a career this guy had.

Maybe the fact that he didn’t have much playoff success combined with not entering the league until age 27 has hurt the overall value.

Whatever the case we feel buying a few Suzuki rookie cards is a smart move. If you have a large budget opt for the SP Authentic or the SPx Signed Jersey cards. If you have a smaller budget consider the 2001 Topps RC #726 (no matter the card try to buy a high grade i.e. PSA 10, PSA 9, SGC 10, or BGS 9.5).