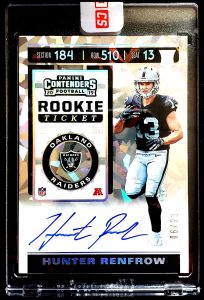 Hunter Renfrow was drafted by the Las Vegas Raiders with the 149th pick in the 5th round of the 2019 NFL Draft.

He was an obvious long-shot but paid big dividends in his first year collecting 605 yards and 4 touchdowns.

He put up over 100 yards and a touchdown in each game of the last two weeks of the regular season… Hunter Renfrow is a great sleeper pick heading into 2020, which also makes him a sneaky good football card investment.

Let’s take a look at the 3 best Hunter Renfrow rookie cards from an investment standpoint.

The card shows Renfrow clutching the football in his right hand while in the process of performing a Madden like juke move.

Card Info: Numbered #139 the back of the card reads “In 2016, Renfrow became a well-known name with his performance vs Alabama in the national championship game. That same year, Hunter Renfroe was called up to make his big league debut with San Diego. The pair finally received the opportunity to meet when baseball-playing Hunter’s team traveled to San Fransico in June 2019”

Our Take: This is the card you want to buy to max out your ROI if you believe as we do that Mr. Renfrow is going to have a big sophomore year.

Related: CeeDee Lamb Rookie Cards are ready to explode… find out why! 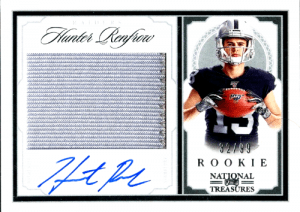 This card is a jaw-dropper and is reasonably priced.

The card shows Renfrow clutching the pigskin with both hands with a pissed of look on his face that seems to say come get some bruh!

Card Info: Numbered #199 and the back reads “Renfrow wasn’t nervous before making his NFL debut in 2019. Instead, the wide receiver relied on his epxerience on the practice field”

Our Take: A great investment and won’t even cost that much (for now) and this is a National Treasures card! If Renfrow has a great or even good season this card will be a big ROI gainer. 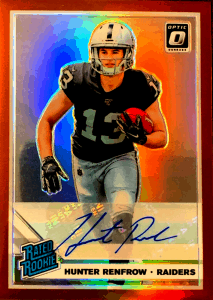 Imagine a Donruss Optic Rated Rookie Card on this list…

The 2019 Hunter Renfrow Optic RR card shows him running downfield with the football in his left arm and scanning the field for the upcoming defender.

Card Info: Numbered #199 and the back reads “It’s not hard to compliment a receiver. Just go with it… Best hands of anyone in this entry draft. That’s how the NFL Network draft analysis Daniel Jerimiah said of Renfrow”

Our Take: A solid card for those looking to spend a lesser amount on our sleeper pick as these Optic cards shouldn’t cost all that much.

Read Next: One of the NFL Greats… Brett Favre Rookie Cards are a great long term investment

We expect his rookie card values to soar this year as he emerges as one of the league’s best slot receiver.

Now we could definitely be wrong and there is a lot of risk in this recommendation so follow at your own discretion.

If Hunter Renfrow can carry his production from his last 2 games forward to the 2020 season… watch out rookie card prices… they are going to soar.

We feel he is a great break out candidate and is in for a big year regardless of who’s passing him the ball.