Arguably the most popular collectible of all time, the 1952 Topps Mickey Mantle is seen as ‘The Holy Grail’ of baseball cards.

A copy sold for a record-breaking $5.2 million in 2021, which is the most ever for a sports card.

It’s the very same copy that sold for $2,880,000 million in April 2018, which is one of many reasons why it’s seen as one of the best investment opportunities in the hobby right now.

However, this has led to a never-ending selection of fakes and forgeries on the market, whether it be raw or graded copies.

Here’s everything you could possibly need to know about identifying fake 1952 Topps Mickey Mantle cards.

The ‘52 Topps might not be his RC, but it’s important enough to be featured in our Card Chronicles series.

It notes that this card is the face of the hobby (alongside the T206 Honus Wagner card) and is for sure the most iconic post-war card ever made.

One reason for that is the era and area that Mantle played in. New York is the largest media market in all of North American sports and the Yankees are an international brand.

Mantle benefited from playing for the legendary franchise and all of the extra eyes that were on him at all times because of this.

Mantle was also a clutch playoff performer, something that fans love to see and identify with. Being able to perform at your best when it matters most is a quality that many admire, and Mantle embodied it more than anyone else.

The other factor besides the player is the set that the card belonged to. Mantle was number #311 which meant that his card was part of a short run, to begin with.

Related: How to tell if a 1979-O-Pee-Chee-Wayne-Gretzky rookie card is fake

After overestimating the popularity of the set, many copies ended up at the bottom of the ocean and the quantity is definitely another factor that makes this card so valuable.

The 1952 Topps set also included other significant cards such as rookie cards of Eddie Matthews, a second-year card of Willie Mays, and multiple other Hall of Famers such as Jackie Robinson.

You’ll be able to identify a fake ‘52 Topps Mickey Mantle fairly easily if you know what to look for.

To begin, grab a cheap loupe if you plan to inspect the card yourself. Some flaws in the ink can’t be seen unless you look closely, and a loupe is the best way to be sure.

Other than that, you won’t need any special equipment.

Follow our step-by-step guide to ensure that you don’t get burned by one of the many fakes on the market.

The task of identifying the legitimacy is made slightly more difficult as there are a couple of 1952 Topps Mantle card types.

There’s no difference in value between the two, as long as they’ve achieved the same grade.

With two types, it does make it slightly harder to fake.

They’re going to have to pick one of the designs seen above, so be sure to ask the seller which type it is. That way you’ll be more prepared when you begin to check the card.

As with many older sets, one of the first identifiers to look at is the card stock.

Possibly the hardest aspect to reproduce, counterfeit versions will often have a thinner card stock or will vary in texture and color compared to the real thing.

It’s worth grabbing a few cheap cards from the ‘52 Topps set so you’re able to get a feel for what the stock should be like.

A light test is one method to check whether a card is legitimate or not.

If you shine a flashlight behind the card, you can check how much light passes through compared to another sample from the set.

The bright sky blue of the background is one of the reasons why the ‘52 Topps Mantle is so iconic.

The ink and color are two important ways in which you can tell a forgery apart from the real thing.

We’d avoid versions with a deeper green background, as they have been known to be forged in the past.

On both versions of the card, the bat should be yellow, with black markings near the handle. A lot of fakes are missing the black spots on the bat, which is another sign that the card probably isn’t legitimate.

The same isn’t true for fakes and can be identified with the use of a loupe.

Given the age, cards from the set will have slightly different coloring, and it’s one of the easiest ways to identify a fake version online.

We’re coming up to the 70th birthday of the 1952 Topps release, which leads to typical wear and tears that you’d expect from a card that is twice as old as many collectors.

Many forgeries make a significant effort to reproduce this, artificially aging the card with a variety of methods.

They can make it look a bit older, but it’s hard to replicate the smell and feel of a card that has been around for several decades.

Perfectly cut corners should be a major red flag, along with scratches or bad scuffs that look like they could have been done with sandpaper.

This is often done intentionally to cover missing spots or identifiers, such as the black found on the bat, or the pixels for either type.

Any vintage card collector will tell you that centering tends to be the most common flaw with the majority of older sets.

Many were printed awkwardly, while it’s not uncommon to open an older pack only to find an off-kilter card that has also been cut incorrectly.

Many forgeries will correct any centering issues, which is a telltale sign that something could be wrong with the card.

Of course, this isn’t true for all forgeries, but we’d be wary if it looks too good to be true.

We’d also watch out for perfectly cut cards, as it could be an indicator that the corners have been altered to make them more aesthetically pleasing.

Consider the asking price, or checking out various graded options is another way to avoid many fakes.

Of the many reputable grading services out there, PSA is generally preferred for older cards such as the ‘52 Topps.

A graded 1952 Mantle card will be worth far more than the equivalent raw version, but it does come with various benefits attached.

For example, as long as the slab is legitimate, you’ll be able to check PSA cards thanks to a QR code on the reverse.

Beckett has also released a new tamper-evident certification sticker as of 2021.

However, that hasn’t stopped scammers from using slabs as part of their setup.

Take the example seen below, which was originally included as part of a display case with a second Mantle card. 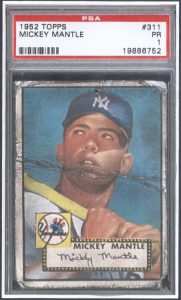 Along the way, someone had cracked the authentic Mantle out, inserted a fake, and then put the entire holder into what looked like a very nice framed display.

The buyer was nearly burned for $5,000, so make sure to check that the slab hasn’t been cracked or altered in any way.

(The card does look pretty fake, with wear and tear that has been added artificially.)

As the most expensive collectible card ever, you don’t need me to tell you how valuable the ‘52 Mantle is!

Prices have steadily risen over the past two decades, which is why it’s one of the more popular options for scammers.

Collectors are desperate to own a real piece of baseball history, while the chance of massive profits makes it easier to be blinded by greed and desperation.

Put it this way. It’s highly unlikely that anyone is sitting there with a raw Mantle card waiting to be bought for 20% of the actual value.

This is especially true following the record-breaking sale, which beat the Mike Trout 2009 Bowman Chrome Draft Prospects Superfactor BGS 9 card which sold for $3.93 million in August 2020.

If you’re not sure what you should be paying, eBay is a great source for recent sales prices.

Any popular release is susceptible to being fake, especially older editions which lack a serial number or ones that are wrapped in an older sleeve.

Mantle’s first-ever Topps card is one such item, which is understandable given the value and the lack of graded options at the upper end.

There’s massive money in the card, which is why it’s advisable to stick with graded versions when possible.

If you do plan to buy a raw card, use the guide to give yourself a better idea of which version it is, and whether it’s actually real. We’d stick with reputable sellers, especially given the average price paid.

Replicas of the 1952 Topps Mickey Mantle are easy to spot when you know exactly what to look for.

The majority are too perfectly centered or lack the weathering you would expect after several decades.