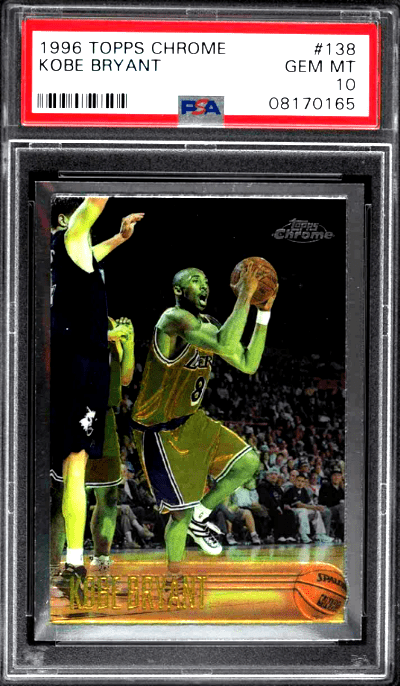 Basketball cards should be seen as a great long-term investment, especially as prices have begun to cool off ever so slightly in recent months.

It could be the perfect time to snag one of the more popular sports cards in the hobby, with an ever-dwindling supply and a growing number of collectors who are interested in the greatest hits.

Here are five of the best high-growth basketball cards to buy and hold forever. (Maybe not forever, but for as long as possible.)

The top five basketball cards come from a range of different eras, but there are similarities shared between each one.

For example, they’re all rookie cards (RCs), while they feature some of the greatest players ever.

The majority don’t have a signature or a patch, relying on the star power of players that helped to shape the sport we know today. 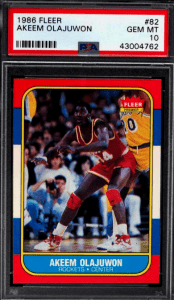 Instantly recognizable, it’s wrapped in a red, white, and blue border with an image of Olajuwon found in the middle.

The set also contains rookie cards for Charles Barkley, Karl Malone, and Patrick Ewing, making it one of the most popular hobby boxes of all time.

We could see this card exploding in value as Africa begins to take more of an interest in U.S. sports over the next decade or so.

Where better to look than a player born in Lagos, Nigeria, as the third of eight children, who also happens to be a two-time NBA champion, two-time finals MVP,  and 12-time All-Star? 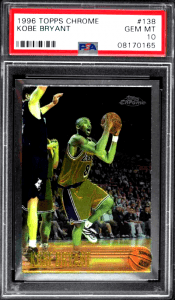 A phenom in his early years, Kobe Bryant went on to become an icon in the sport during the latter stages of his time in LA.

“The Black Mamba” is beloved by millions around the globe, who are still coming to terms with his untimely death in 2020.

The 1996 Topps Chrome release is one of his top rookie cards, if not the best that money can buy at this moment in time.

Wrapped in a chromium finish, there’s also a refractor version which is worth megabucks.

Both are incredibly condition-sensitive, and there are hardly any confirmed PSA 10 copies in the world, so there’s only one way the value is likely to go. 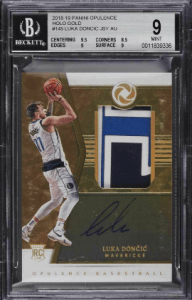 The sole current player to make it onto the list, it’s hard to argue against the inclusion of this Luka Doncic card.

This 2018 Panini Opulence Doncic rookie patch is ultra-rare and flies under the radar in comparison to some of the others released that year.

We really like this Luka RPA, in particular, the Holo Gold version numbered to just 10 copies. (There’s also a Gold parallel numbered to 25, along with a Platinum one-of-one.)

As a 22-year-old, the risk factor is a lot higher when compared to the retired Hall of Famers discussed above and below.

After all, there’s always a chance that injury or any number of situations could arise, but Doncic really does seem to be the real deal.

A release so popular that it manages to make the list twice, the ‘86 Fleer set is back as we look at the Jordan rookie card contained within.

It just so happens to be the RC for the consensus best basketball player of all time, so it has to be seen as a no-brainer when listing the best high-growth cards in the hobby.

The Jordan Fleer RC helped to kickstart interest in the hobby again back in the mid-1980s and did so again in 2020 following the release of The Last Dance.

A true icon, others may vie for his GOAT label, but few can pretend to have had such a massive impact on the cultural landscape of the world. 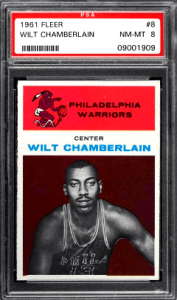 Wilt Chamberlain was a true man among boys in his era, averaging 50 points per game in 1961, and a mind-blowing 22 rebounds per game for his career.

Fleer was the only card manufacturers in 1961, and the Chamberlain RC is the key to the set.

The card is split into three segments, starting with a team name across the top surrounded by a distinctive red background.

His name and position are found in the middle against a white backdrop, while a black and white profile image of the player is located underneath.

It’s a classic design and another option that has seen great traction over the last decade or so.

The cards found above feature some of the biggest and best names to ever make it onto the court.

Of course, you could buy a Beverly Hills condo if you happen to have a collection of PSA 10 copies lying around, while even a PSA 2.5 (good) version of the Chamberlain card will sell for over $3,000 at the current time of writing.

The point is, it’s an expensive collection, while there are many reprints and fakes floating about on the market at any given time.

We would advise sticking to the highest grades you can, as cards in better condition tend to see the increased value over time in comparison to raw versions.

You can’t do better than the best players and their RCs if you’re looking for high-growth options that should be held for the long term.

Time and again, they outperform others from their era, even if you only have a sole graded card featuring the likes of Jordan or Kobe.

Have we missed out on a high-growth basketball card that is sure to make serious money over the next decade or so?