Let’s play a quick game of word association. I’ll throw out a polarizing, two-letter acronym: “AI”. What comes to mind?

Until recently, few have associated “AI” with “trading card grading”. Tyler Hitt, CEO of the Hybrid Grading Approach (HGA), hopes to create a stronger association between the two, particularly in the minds of those who have become jaded with inconsistent, costly, and time-consuming grading practices.

We spoke with Hitt to gain a better understanding of how HGA works, its value proposition to collectors, and what it’s like to be the new kid in a space traditionally dominated by names like PSA, BGS, and SGC.

Reader note: for clarity, Hitt’s responses are offset in italics and quotation marks. Regular text is the author’s words.

PSA, one of the industry leaders in card grading, issues grades on a scale of 1-10, a grading range accepted industry-wide. HGA adopts a similar ten-point grading scale. Where HGA differs from PSA, though, is in the manner that it generates a grade for each card. PSA and most other card grading services rely exclusively on human graders—‌and the human eye specifically—‌to evaluate a card based on several criteria.

You can probably guess the leading critiques of human-led grading practices. The subjectivity and fallibility of human judgment top the list of customer gripes with human-led grading. Many discontented or genuinely curious observers ask: with hundreds, thousands, or even millions of dollars riding on any single grade, how are we still relying on nameless, faceless, unaccountable human graders to judge a card’s quality?

PSA and other grading services would surely tell you that there are ample checks and balances to ensure consistent, objective grading. This does little to quell the frustrations of critics who insist: humans are fallible, and there’s no way around it. Like those who marvel at umpires continually blowing calls while the electronic pitch tracker gets it right every single time, countless collectors wonder why card grading isn’t more technological.

HGA presents these critics with an alternative, an AI-powered card grading solution that substitutes human fallibility for AI-assisted objectivity.

The key to explaining HGA lies in the “H”—hybrid. As Hitt explains:

“The ‘Hybrid’ in Hybrid Grading Approach refers to our hybrid grading system between our AI grading system and our expert human graders. Each card is scanned and run through our AI system before our expert graders check and approve the grades.”

Rather than human graders being the front line in the grading process, HGA relies on them as the last line of defense against misgrading. With the HGA approach, an AI grading system (patents pending) scans each card in ultra-high resolution. HGA’s site claims that its AI can observe “better than a magnifying glass and can pick up blemishes the size of a speck of dust.”

The AI technology is trained to identify the same types of flaws that human graders traditionally seek—creasing, bent corners, scratches, centering problems, staining, lack of gloss, and other imperfections. HGA’s AI issues each card a grade along its ten-point scale, similar to how trading cards have traditionally been assessed.

The primary difference between HGA and its competitor services is pretty simple, but significant: a cold, calculating AI grading system evaluates cards through a consistent, high-powered lens. With competitors, you instead rely upon humans—biases and optic shortcomings included—to lead the evaluative process.

Check out HGA Grading on IG

What was the impetus for creating HGA?

In short, frustration with the state of card grading. As Hitt has explained in previous interviews, the explosion of card collecting in the past year-plus has exposed significant flaws in the grading ecosystem:

“Last year I had some issues with my own experiences with grading. [Grading] times got longer, [I saw] inaccuracies in my cards coming back. I got with my team and realized there is a better way to do this, and there’s a more fun way to do it, and a more precise way to do it.”

What better, more fun, more precise way of grading, Hitt and his team believe, is the Hybrid Grading Approach.

The objectivity of AI-led grading is the primary value proposition that HGA presents:

“Due to our AI system, we are able to take out the subjectivity some of the legacy grading companies have been accused of having,” Hitt explains.

In addition to its fundamentally unique approach to grading, HGA also provides certain touches that Hitt believes are long overdue. Color-coordinated labels may not seem like the biggest deal to casual collectors or those unfamiliar with the industry, but seasoned collectors will certainly appreciate such attention to aesthetics, as Hitt explains:

“We offer color match labels which is something this hobby has needed for quite some time. Our unique labels add to the look of our slabs and truly compliment your card.” 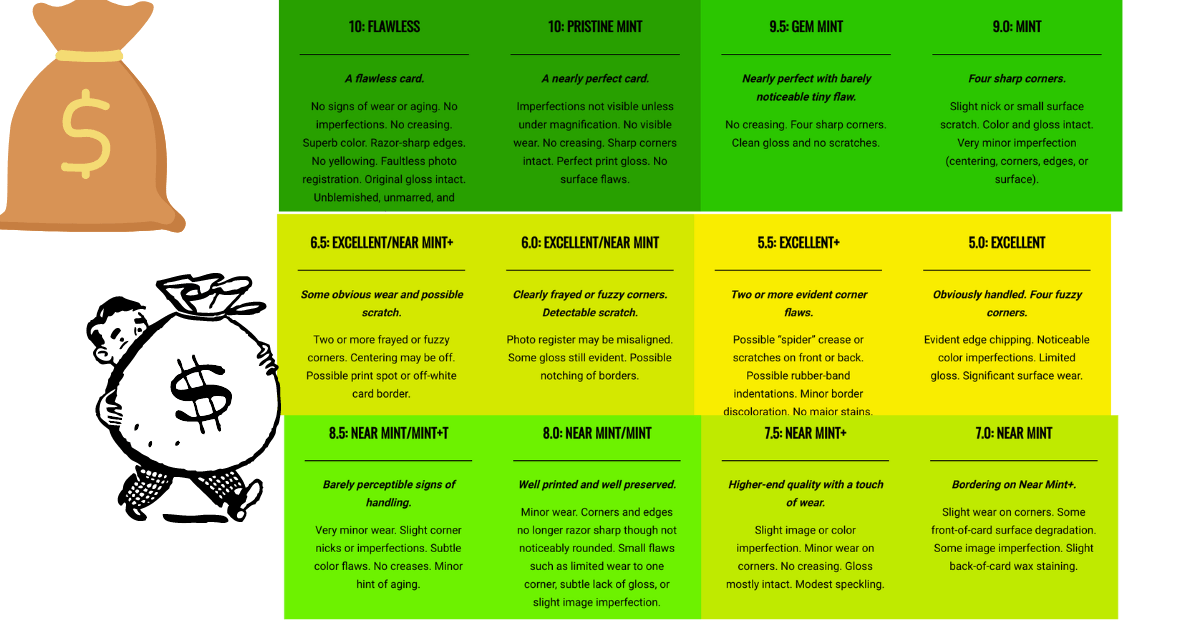 On March 1, 2021, PSA announced that it was doubling the price of its grading services, also implementing minimums for the number of cards that customers must submit. HGA hopes to appeal to those who need cards graded but are unwilling to pay such a steep price.

Rather than paying grading fees based on a card’s value, HGA charges customers based on their desired turnaround time, with slight modifications based on the number of cards the customer submits. For example, customers pay $70-$75 to have cards graded in two business days. More budget-conscious collectors can pay $20 per card and wait 60 business days for their grades, or $35 per card for a one-month turnaround time.

PSA’s rates are considerably more expensive, and turnaround times are less clear. Customers using PSA must also determine the declared value of their card before submitting, an extra step that HGA does not require of its customers.

How has HGA established credibility in a marketplace traditionally dominated by a few major players?

PSA and other long-established card grading services have been able to command higher prices (especially for well-graded cards) and a sizable market share for good reason. When customers pay for a PSA grade, they know that other collectors will respect that grade, whether or not they agree with the evaluation of the card. Hitt and his team at HGA believe that time and transparency will ultimately drive broader adoption of the Hybrid Grading Approach:

“We have been very transparent about our grading process. Our AI video is being released this week [answers provided the week of 9/27/21] to give more insight on how we continue to evolve the grading deficiencies experienced across the industry for quite some time.”

Hitt remains encouraged by the uptick in customer submissions:

“We are very happy with the submissions we are currently receiving. We are taking in well over 10,000 cards weekly. We opened in January taking in 800 a week and since then we have increased our submissions by over 1,250%. We’re thrilled with how much we have grown over the past 8 months.”

In the world of card grading, there is perhaps no greater indicator of customer confidence than the number of cards submitted for evaluation. Based on what Hitt is seeing, consumer trust in the Hybrid Grading Approach is rising at a rapid clip. More time is necessary to determine if the trend is sustainable.

The HGA camp sees much reason for optimism. Rooted in the foundational belief that AI has the potential to transform card grading for the better, Hitt sees significant demand for a more precise, affordable approach to grading. He and the HGA team have no plans of backing down from the industry’s big dogs:

“We aren’t going anywhere. We are here to stay. We have heard the positives and negatives over the past 8 months and we are continually building a better platform and community.  We have faced many challenges and continue to do so. I feel that we have done amazing things so far and we will continue to push the envelope to be a better company for collectors.”

Ultimately, collectors hold the power to cement HGA’s status as a viable alternative to more expensive, human-led grading services. If the collecting public decides that it wants to pay less to have its rookie cards, TCG cards, and other valuables graded with the help of AI, then HGA could be here for the long haul.