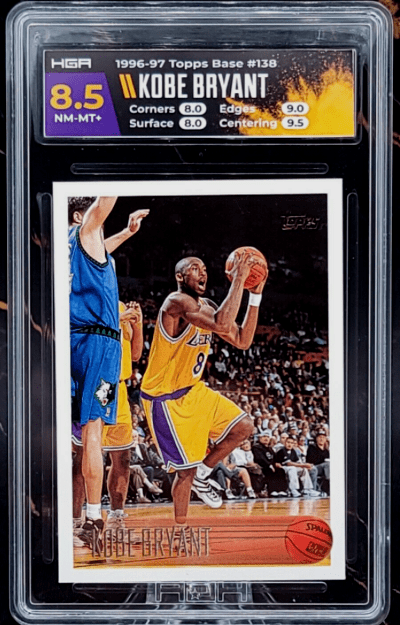 Hybrid Grading Approach (HGA) could be a game-changer depending on your thoughts regarding the various grading services offered to high-end card collectors.

They promise to be cheaper, and faster, but surely there must be a compromise or two somewhere along the way?

Here’s everything you need to know about HGA, from the system itself to a look at their proprietary software which is used to scan, analyze, and grade cards.

Are they another viable choice for collectors who want to turn a profit as quickly as possible, or would you be better off waiting a little longer for the experts at PSA, BGS, or SGC?

Who is HGA Grading?

Who is Hybrid Grading Approach?

A smaller company compared to established names that have been operating since the 1990’s, they only joined Twitter in January 2021. 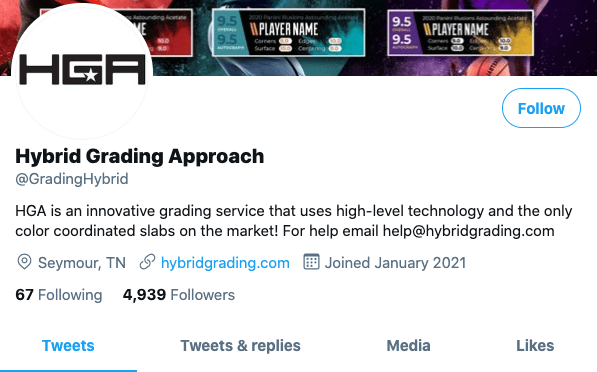 The owner and CEO is Tyler Hitt, who has opted for a transparent approach in terms of how the business is run.

For example, they have a small YouTube channel where he will directly respond to comments and questions, as well as taking the time to explain their long-term plans as they aim to become the number one grading company in the world.

They’ve actually been operating for just over a year now, and have upped staff numbers from a core set of 8 to over 80 employees to deal with an influx of new customers as word of mouth has begun to spread about the service.

“HGA is revolutionizing the industry by implementing software that will allow us to scan, analyze, and grade cards without subjectivity. Each card is scanned at ultra-high resolution. The scanner sees better than a magnifying glass and can pick up blemishes the size of a speck of dust.”

An objective approach would pay dividends for many collectors who were sure their card should have received a higher grade but is that actually doable in the present day?

It’s going to take a lot of effort to surpass the likes of PSA and BGS, and HGA aims to do so by improving on the formula that the others have already laid out.

HGA uses a 10-point grading system which is reminiscent of many other popular services. 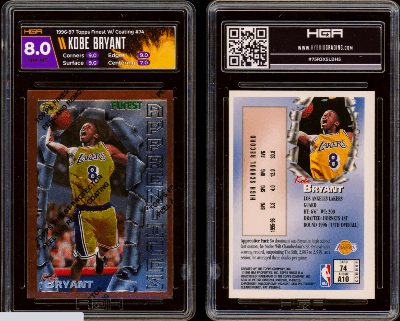 At the top, you’ll find pristine copies, whereas lower grades are more likely to have at least a  few blemishes. They will also issue 9.5’s, depending on the following criteria:

Each of the criteria will receive its own grade on the 10-point scale, giving a good level of precision in line with Beckett’s service.

HGA Grading has also opted to use digital grading instead of the traditional, more subjective model.

They’ve done this by creating proprietary software that they say will ‘scan, analyze, and grade cards’, but how feasible is this, and how does it all work?

They say that they use AI to grade the card initially, but then two different humans look at the card to verify that the AI’s grade is correct.

If it works as they claim, it could be a game-changer in terms of providing a speedy service that will give a similar result each time.

Trending: Why Investing In Sports Cards Is A Must

On the other hand, it sounds fairly difficult to develop and implement, and there are bound to be issued along the way.

Their pricing and wait times do help to make it easier to give HGA a try, so we’ll look at their plans next.

HGA takes a different tack when dealing with pricing and potential wait times. Their aim is to;

“Keep our pricing simple. We believe in presentation overvalue so pay by the day, not by the value of the card.”

That’s in stark contrast to the likes of PSA, as they increase the grading fee significantly depending on the declared maximum value of the item/s.

There are four levels of service to choose from, which differ depending on the number of cards you want to be graded, as well as the amount of time that you’re willing to wait.

Their ‘Best Value’ tier means a wait of 60 business days, but it’s priced at just $20 per card. On the other end of the scale, their ‘Fastest’ tier takes two business days and costs $100.00 each.

It’s insanely cheap compared to PSA, which can charge up to $10,000 per card if you’re looking at high-end items.

Sure, they’ll get it back to you in one business day rather than two, but is that worth paying 10, 20, or 100 times more than the HGA fee?

You’ll make more money from PSA-graded cards compared to HGA when it comes to sales, but will you lose out in terms of the fees you’re paying to confirm that your collection is in mint condition.

There’s a trade-off either way, but it’s easy to see why HGA is starting to gain traction within the collecting community.

A lot of faith in the grading industry was lost when services failed to deal with a growing number of orders while people were stuck at home during the pandemic.

There was a massive backlog that has now mostly been cleared thanks to updates that reflect achievable wait times, as well as hiring more staff.

Given the above, is it really feasible for HGA to continue to offer turnaround times of 2 business days priced at just $100.00 per card?

Perhaps, as they claim to use machines to help form the basis of their decision, rather than relying on humans to go through each and every card painstakingly.

However, they have fallen behind schedule a few times, as noted in the post seen below. 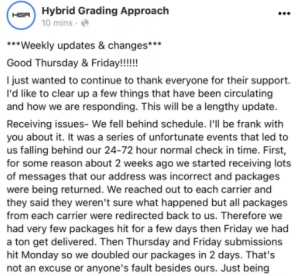 They have continued to commit to their current pricing structure for the time being, but I wouldn’t be surprised to see increased costs met with increased grading fees in the future.

At least you’ll be the first to hear of any downline issues via social media channels, or even from the CEO himself.

It’s a level of attention to detail that you won’t be able to find if you stick to more established services, although it’s likely to be lost if they continue to grow at such a rapid rate.

There are various pros and cons to consider before sending your cards to HGA to be graded.

Here are the main positives and negatives that we could find while researching the service.

A quick glance at eBay will show a number of recent HGA card sales, although they won’t go for anywhere near as much as the PSA or BGS equivalents.

That’s fair, given it’s a more affordable service that can be used to pump out grades as quickly (and objectively) as possible. 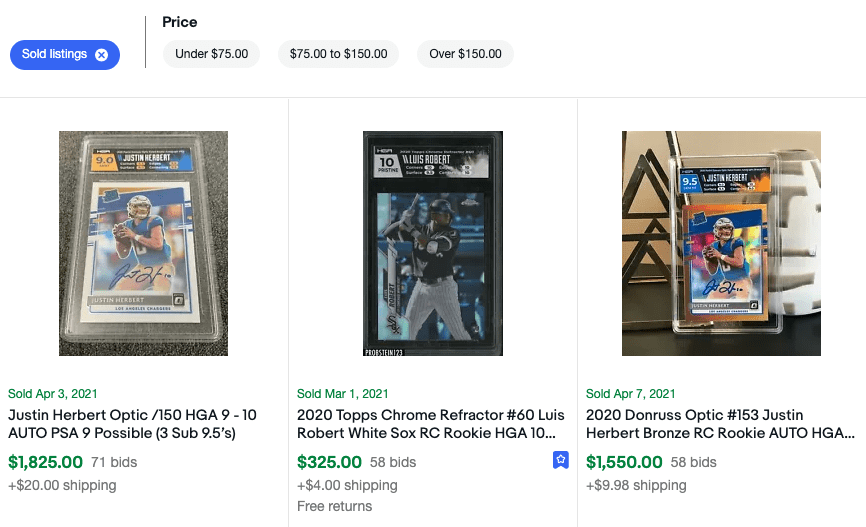 A couple of copies pop up when looking at HGA cards with the most bids, so it’s not like you won’t receive attention if you’re planning to sell a coveted card.

However, a PSA 9 copy of the Herbert card seen on the far left recently sold for $4,779.55, so you could be missing out on major money if you just want to quickly flip a card or two.

I would expect prices to improve as time goes by, as HGA slowly gains more recognition for its efforts to provide a more affordable grading service.

That does mean that current sellers are likely to be the ones who are going to bear the brunt of lower prices for now.

How to submit your cards to HGA Grading? 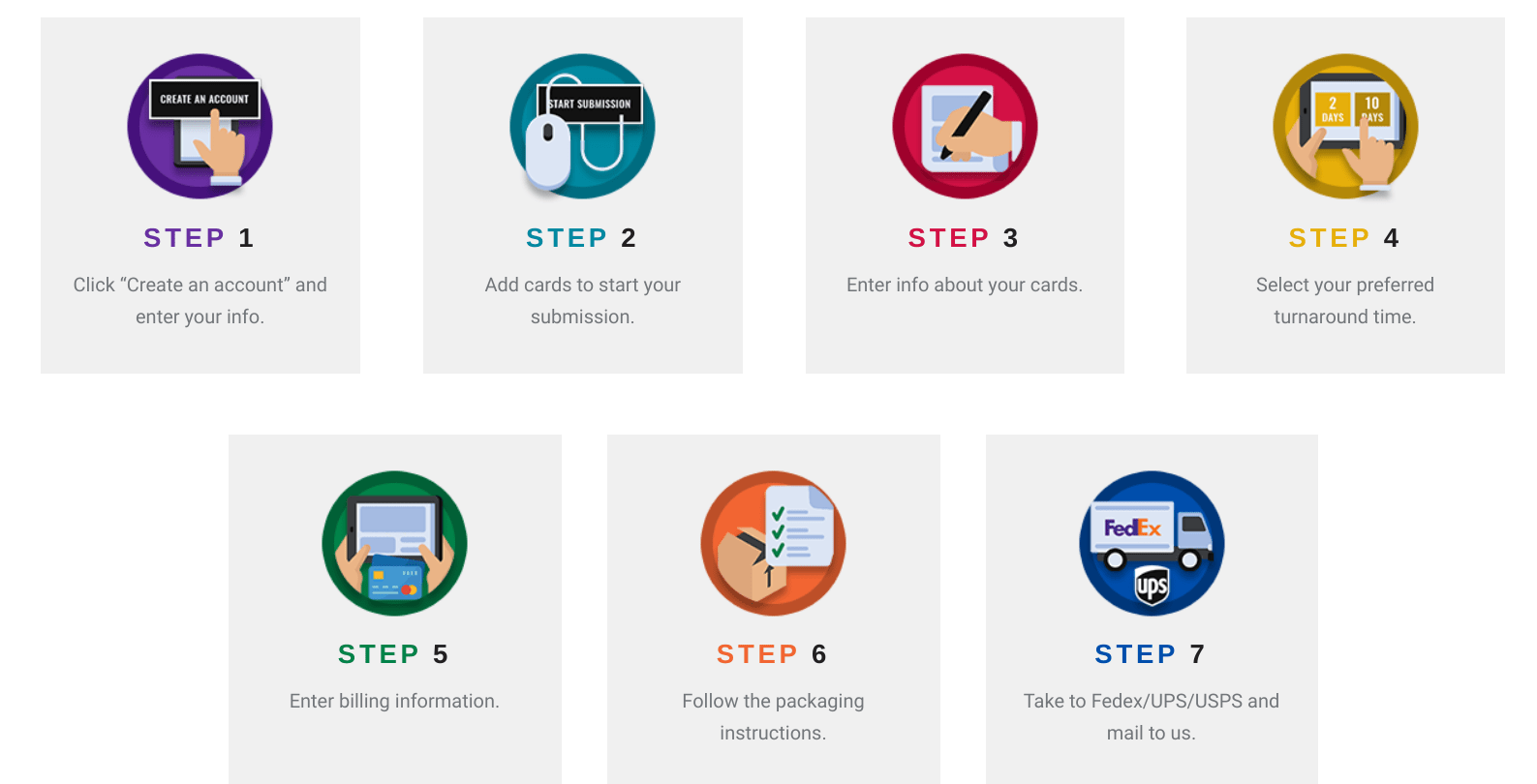 Below is what the order form will look like;

The HGA population report is a tool that can be used to see which cards and sets have been able to achieve specific grades from the company.

For example, you just have to select the year of release and choose from a list of relevant sets.

After that, you’ll see specific players from the set, and which HGA grades they have achieved in the past.

As they’re just starting out, their pop report is still empty for many sets, or even entire seasons.

It’s another feature that will take time to pay dividends, while they clearly need to automate the system to reflect more recent grading data.

Another feature that helps to set HGA apart from the competition is it’s unique slabbing.

HGA says that their slabs are ‘top of the line’ and are ‘color-coordinated with team colors’ to provide the most aesthetically pleasing cards ever seen.

There is some truth in that, given they definitely stand out compared to more reserved pristine slabs from other services.

The slabs can be neutral, team-colored, or parallel colored, with the ability to choose when you submit the cards.

However, one flaw that collectors have noted is that some have returned mislabeled, or with spelling mistakes for player names.

Hitt takes the time to address this via YouTube, saying that it has been a case of human error each time.

He’s hoping the move to an automated system will remove many of the problems they’ve faced during the early stages, although it’s still an issue that has led to delays for their users.

Have you personally tried out HGA? Comment below this article or email us (info@goldcardauctions.com) and let us know what you think of the service and we’ll feature your comments in the review to help out other potential users!

“Hybrid Grading offers a variety of new features to entice collectors to use their grading services over PSA, BGS, or SGC… the sad part is the prices are just about the same if not more” – Timmy C. Chicago, ILK

The truth is, I have no idea how the HGA grading system works. Regardless, there’s still a human element to almost every aspect, for better or for worse.

They claim that machine learning specialists helped to make the software over a long time span.

AI algorithms are likely to be programmed to look for any flaws, which is a game-changer if it can be perfected.

As a company with little time in the game and serious growth over the last six months, there were always going to be a number of problems encountered along the way.

This is where their transparency pays dividends, as they’re able to provide an explanation as to why they do what they do, as well as detailing how they plan to improve.

The times and pricing are always going to make it a viable option if you just want to flip cards quickly, but they could force real change from larger grading companies if the software actually works consistently.

It would spell the end for subjective grades, and there would be no more deliberations about which system is best.

There’s nothing to stop the likes of PSA and BGS from implementing their own grading algorithm, but there’s only one place where you can get it now for a fraction of the normal price.

You can also get in contact with HGA in a number of ways. We’ve listed their address and other info below:

As well as the above, they also have a contact form on their website which can be used to get in touch with the company.

How much does HGA grading cost?

Which is better HGA or PSA or BGS?

Generally speaking, PSA is the best in terms of card value as cards graded PSA 10 will sell for top dollar when compared to BGS 9.5 or HGA 10.

What is the HGA grading scale?