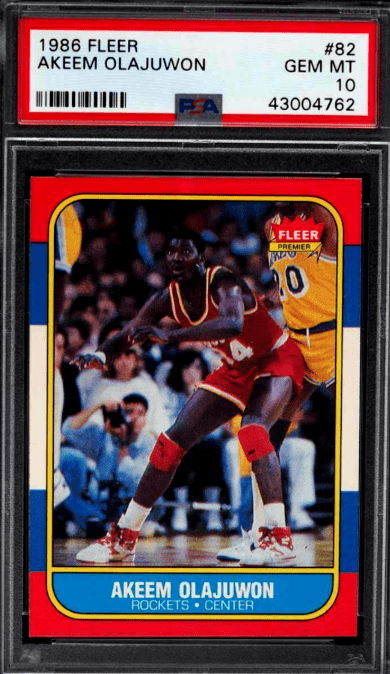 Houston Rockets legend Hakeem Olajuwon (01/21/63) was the first pick in the 1984 Draft, and repaid the favor with a duo of NBA championship wins in the mid-1990s.

It’s not bad for a guy who didn’t start playing basketball until he was 15.

The center ended his career in 2002 after a single season with the Raptors, and he’s still well-remembered as one of the best defensive players of all time.

We’ve listed a trio of the top Olajuwon rookie card options, with lots of info and investment advice located below.

1986-87 is widely accepted to be Olajuwon’s rookie season, although there are a couple of interesting options from 1984-85 which are also popular. In fact, one is first on our list! 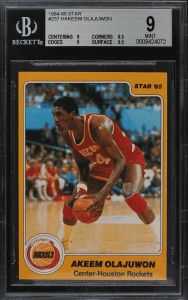 It might not be Olajuwon’s official RC, but the 1984-85 Star is his first licensed NBA card. The bright orange background is the first thing that’ll probably catch your eye, while it features an action shot showing the player readying to shoot.

Rather than an error, the older Star cards note his name as “Akeem” because Olajuwon had not yet changed the spelling of his name to “Hakeem.”

PSA 10 versions are often his most expensive cards overall, that is, until you start looking at the RC we’ve listed below. 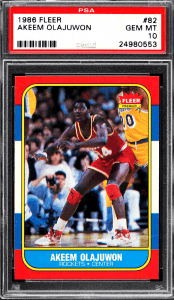 The 1986 Fleer is seen as the ‘official’ Olajuwon rookie card, and it’s part of one of the most famous sets in the hobby. (It also spells his name correctly.) Olajuwon might be disregarded slightly compared to the likes of Charles Barkley, Karl Malone, Patrick Ewing, and Michael Jordan who also had RCs in the set, but it’s still expensive if you’re looking at that elusive PSA 10 grade.

It features an image of Olajuwon backing into a Laker’s attacker, highlighting his enormous frame and his incredible off-ball defense skills.

1986 Fleer cards were susceptible to a wide number of problems, including issues with centering and widespread fakes, while the red corners chip very easily. It’s no wonder high-graded versions are worth so much. 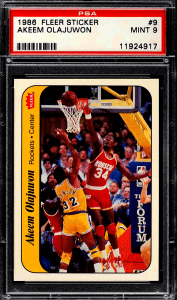 Given the value of the normal 1986 Fleer, the Sticker is a great budget option if you just have to own a bonafide Olajuwon RC.

The strong action shot is a major bonus, featuring Olajuwon dominating defensively against “Magic” Johnson. The insert isn’t as colorful as the card because of the lack of a gloss finish, but it’s still a solid piece of memorabilia.

In fact, it’s probably the best image of all three cards, not that it matters to the majority of collectors who’d prefer the 1986 Fleer.

However, this does mean that it’s slept on ever so slightly, and it could be the best investment piece overall. 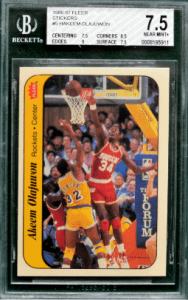 By far the most valuable Olajuwon rookie card is his 1986 Fleer and we predict this card to rise much faster than the average NBA HOF player rookie card.

Hakeem Olajuwon is by far the best player of all time from Africa and this should help the value of the 1986 RC tremendously over the next 20 years as Africa moves away from a third-world economy to a first-world economy… hopefully.

Looking to purchase a Hakeem Olajuwon basketball card? Want to talk it over? Email us at advice@goldcardauctions.com.

Olajuwon is always going to be seen as a legend for Rocket fans, but it’s worth mentioning his work off the court too.

His affordable sneakers might have failed, but his RC’s are still going strong thirty years on. The point is, Olajuwon is unlikely to face any major controversies in the future unless he’s tricking us, Gustavo Fring style.

His rookie cards are all susceptible to issues deriving from the printing process, which is fair considering they’re older than I am.

Of the three cards we’ve discussed above, it’s clear that the 1896 Fleer is the one to go for, especially as it carries the most weight in terms of prestige. (Even if he didn’t get a mention in “The Last Dance” documentary, which would have given them a further boost.)

We are buying up as many as the 1986 Fleer rookie card as we can get our hands on (at a good price).