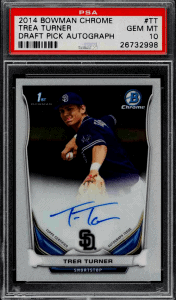 Trea Turner (06/30/93) is a shortstop who currently plays for the Washington Nationals. Initially drafted by the Padres in 2014, he was traded to the Nationals a year later and made his MLB debut soon after.

A World Series Champion in 2019, and the NL stolen base leader in 2018, Turner is known for his devastating speed, helping the team to their first-ever championship in franchise history.

Here’s a rundown with three top Trea Turner rookie cards and investment advice as his current contract starts to run out.

The first Turner prospect cards come from the 2012 season, while his official RCs were released in 2016. There are lots of options, but which are the top choices overall?

Easily his best card, Turner’s Bowman Chrome Draft Picks from 2014 is the first to make a list, featuring a youthful picture of the prospect as he throws a ball. It’s his ‘1st Bowman’ card, and he’s wearing his old Padres uniform.

It’s incredibly popular with collectors, and rare gem mint editions will fetch a decent price at auction. There’s a rainbow of parallels to be on the lookout for, and the majority have low serial numbers.

The 2016 Topps Chrome is next on the list, and we’re looking at the Rookie Autographs set. One of the better Topps designs, there’s no border, focusing on a large crisp image of Turner while he waits to bat.

The bottom half fades into white to allow for a large signature, and his team is listed as the Nationals as he had been traded over by 2016. Another option with great on-card auto is more affordable than the Bowman, and it’s also seen as a true RC.

Of course, gem mint copies of the base card are far cheaper than the Bowman Chrome we’ve listed above, but prices for the refractor parallels are similar when looking at the colored versions.

The final card on the list is Turner’s 2016 Topps Heritage. Styled as a throwback release, the player is pictured in a field with a cloudy background. Turner is smiling at the camera while holding a bat in a posed photo, and it’s reminiscent of popular options from the past.

Another signed option, the autograph, doesn’t have a specific section and is found somewhere at the base of the card. Typically signed with blue ink, it’s also available in a Special Edition (red ink) parallel which is hand-numbered to just 67 copies.

However, remember that several Real One Autographs were mistakenly signed in red ink, making them look like a Special Edition Real One. (You’ll be able to tell by checking for the handwritten serial number, which is also filled in red ink.)

The most expensive Trea Turner rookie card is the 2014 Bowman Chrome Refractor Trea Turner Autograph rookie card numbered #TT. This card is also the most popular of all his rookie cards up for auctions on eBay.

Looking to purchase a Trea Turner rookie card but need advice? Email us at advice@goldcardauctions.com, and we will be happy to help. 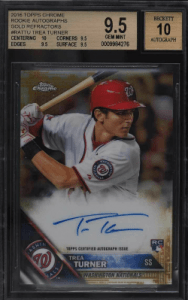 A World Series winner and a key member of the Nationals team, Turner is still in the prime of his career, and he could still improve given his eagerness to learn. There’s every chance he could win another championship, but much depends on where he ends up in the next few years.

Turner has been on a hot streak since the 2020 season started, which is excellent news following an injury that restricted the shortstop to just 122 games last year. There seem to be no lasting issues after he was hit in the wrist by a 96.3-mph fastball from Cubs reliever Pedro Strop.

Much depends on where he ends up, having agreed to a $7.45 million, one-year contract in January 2020. Negotiations will be back on the table if he continues at his current pace.

One of the fastest players in the league, his cards have failed to keep up with the most popular options despite his achievements so far.

The amount of signed RC options has led to a slightly diluted market, and that’s before considering pre-rookie cards like the Bowman Chrome. Regardless, there’s still room for profit, and prices are relatively low considering how bright Turner’s future appears.

You’ll be kicking yourself if he wins another ring in the next few years, while at worst, prices are likely to remain at current levels in the foreseeable future.