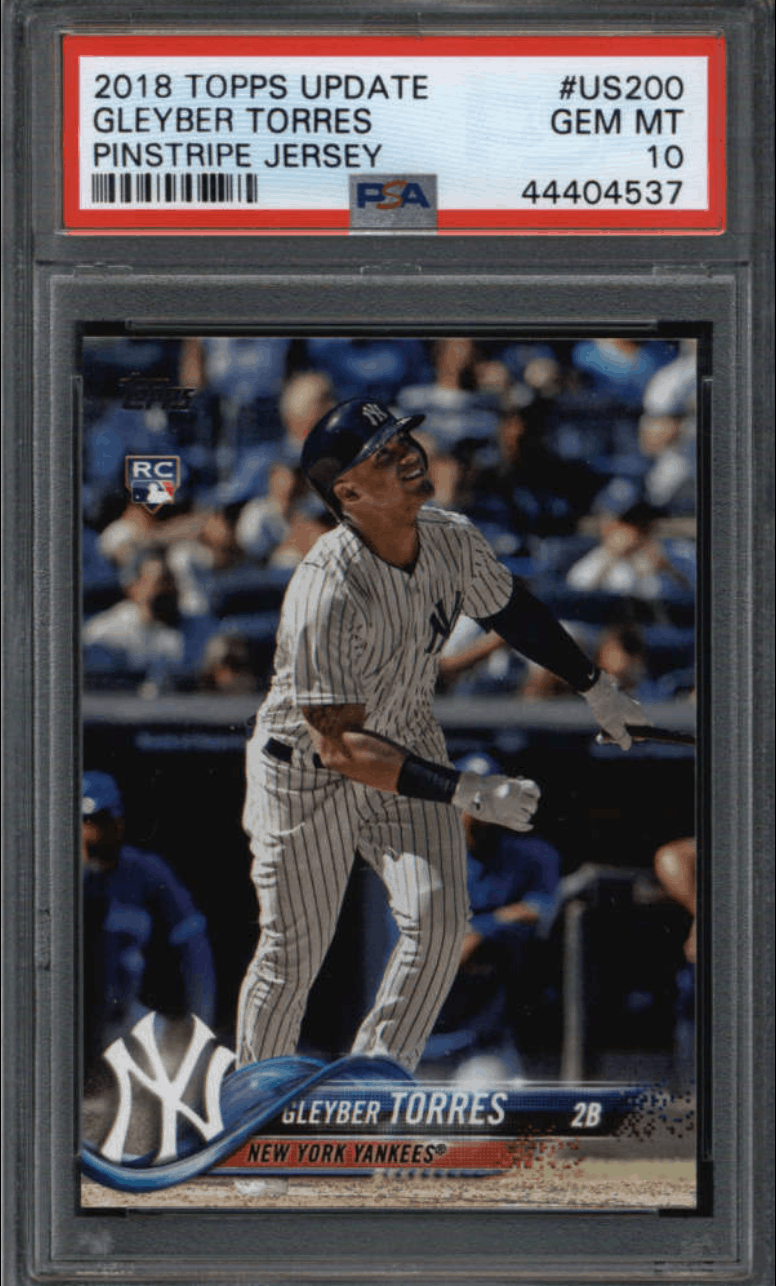 Gleyber Torres was born on 12/13/1996 in Caracas, Venezuela, and made his MLB debut on April 22, 2018. Torres was originally signed by the Chicago Cubs as an international free agent in 2013 for a $1.7 million signing bonus.

Torres has exceptional bat speed, good power, but will never be a base-stealing threat as he does not posse first-step quickness. 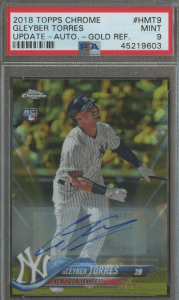 This is our favorite Torres rookie card and we own a few graded PSA 10 and one gold parallel graded BGS 9.5 (read BGS Grading vs PSA Grading).

The card shows Torres just getting out of the batter’s box after slapping a double into the gap? The card is available in a variety of parallels and we like the gold parallel in particular.

Numbered #200 the reverse reads “Gleyber didn’t make the 2018 opening day roster but by mid-July, he was batting cleanup in what is arguably the sports most ruthless lineup…” 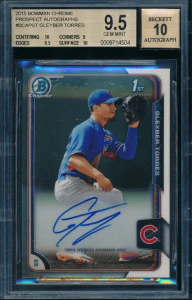 The Bowman Chrome Torres rookie card shows him waiting for the ball to arrive in his glove. Not the best photo in the baseball card world but not the worse either.

What really makes this card stand out is the Torres autograph. Numbered #BCAP-GT the reverse of the card reads “No. 8 Cubs prospect for 2015 (Baseball America)… Went 11 for 28 (.293) after promotion to Boise in ’14… Notched homer, triple, and four RBI’s on second pro game on June 22“. 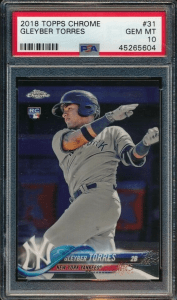 Another high-end Topps Torres Rookie Card but not as high on our big board as the Topps Update but a nice card nonetheless.

The 2018 Topps Chrome Gleyber RC is numbered #31 and is available in a variety of refractor colors.

The reverse of the card reads “Gleyber was barreling towards a possible MLB Debut in 2017 before Tommy John surgery shut him down in June. Rated as the top overall prospect by MLB.com, the former Cubs farmhand was acquired in the 2016 Aroldis Chapman trade. Torres became the youngest batting Champion in Arizona Fall League History mere months after joining his new organization“.

Torres just slapped the ball down the third baseline in the photo and barely legged out a double knowing his speed. 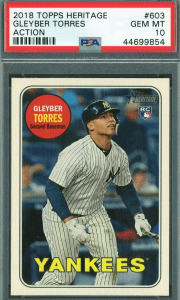 This Torres rookie card can come in a variety of variations.

Out of the six, we like the Error and Tea Color Swap the best.

We like the idea of adding all of the six cards to our investment portfolio as PSA grade 10.

Torres rookie cards should have a nice little run over the next 5 years as Gleyber enters his prime.

If you would like an estimated value of any of the Torres cards in your collection please email us a couple of photos (back and front and corners if possible) to value@goldcardauctions.com.

We don’t love Torres but we feel a couple of his rookie cards would be a smart buy (just don’t go crazy).

His home run power will never be a question, we just hope he can keep his average above .270 (ideally .280 or higher).