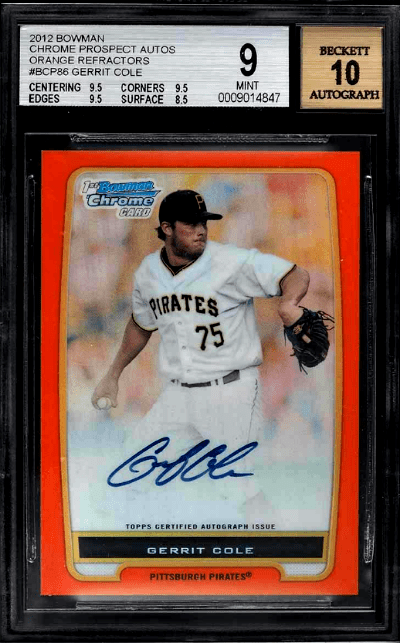 Cole joined the Yankees in a record $324m, nine-year contract signing, the most significant fee ever paid to a pitcher.

Here’s a rundown of three of the best Gerrit Cole rookie cards as he begins his prime years. Should his RCs be seen as a good investment option? Read on to find out what we think.

Cole was always seen as a player who would do well in the big leagues, so much so that there were hundreds of cards released before he made his MLB debut in 2013. We’ve included a few of his early prospect cards below and an RC. 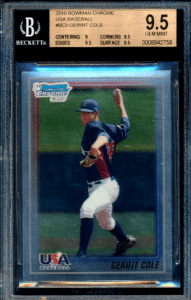 Found in the 2010 Bowman Chrome set, the first option is one of the many prospect cards to feature Cole. It features a strong action shot of the pitcher as he prepares to throw a ball, with concentration etched into his face.

As noted at the top, it’s the 1st Bowman Chrome card, which is always essential for prospect collectors. There’s also a range of Refractor parallels, which will change the outer border color. This has increased rarity, especially for higher grades that have avoided damage. 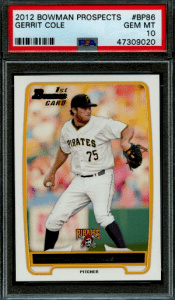 Fast forward a few years to 2012, when we’re looking at another Bowman Baseball set featuring Cole. This time, he’s decked out in his Pirates uniform in the action shot, with a ball in hand and a mitt held ready.

The addition of an on-card auto at the bottom is always interesting for collectors, while the same is true for the various colored Refractor parallels.

“Once again, parallels will correspond with the border colour, so it’s hard to find copies in mint condition.” 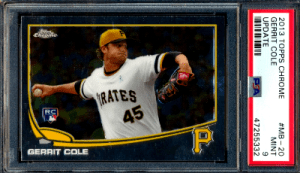 Finally, we have a bonafide RC! Cole was promoted to the major leagues in 2013, evidenced by the logo on the bottom left corner of this landscape card. Another release without a hard border; there aren’t many gem mint copies of the Topps Chrome Update in the present day.

It has the best image of the trio, with a close-up of Cole as he prepares to pitch at breakneck speed. It also comes with yellow trim, matching his Pirates cap. 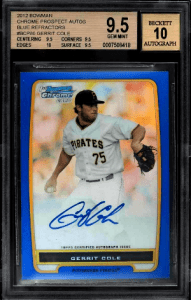 Looking for help in regards to purcashing a Gerrit Cole rookie card? Email us at advice@goldcardauctions.com.

Looking for a players best rookie cards that we don’t have on file? Make a request by emailng request@goldcardauctions.com. 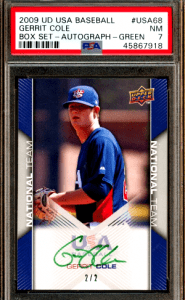 It’s worth remembering that the Yankees are not just trying to win a projection system or the AL East. They are pretty much in championship-or-bust mode. If all goes to plan, it could lead to several accolades and trophies during the next stage of Cole’s career, which will boost his RC prices significantly.

At this time, he’s not a lock for the Hall of Fame, and a season of his prime was disrupted by Covid-19.  Cole’s cards are slightly underpriced, but it’s understandable, given he’s at a crossroads in his career.

Will the next chapter bring greatness? If you think it could, his RCs must be seen as a steal at current prices.