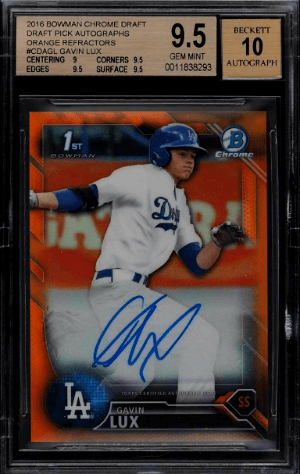 With that in mind, it’s easy to see why his rookie cards are beginning to go up in price rapidly as the hype is beginning to build.

As well as listing three of his most popular RC options at auction, we’ve also provided a checklist and investment advice for the near future.

Both of Lux’s 2016 Bowman cards have multiple versions, which we’ll discuss in-depth below.

We’ve looked at recent auction data to bring you three of the most popular Lux rookie cards on the market right now. 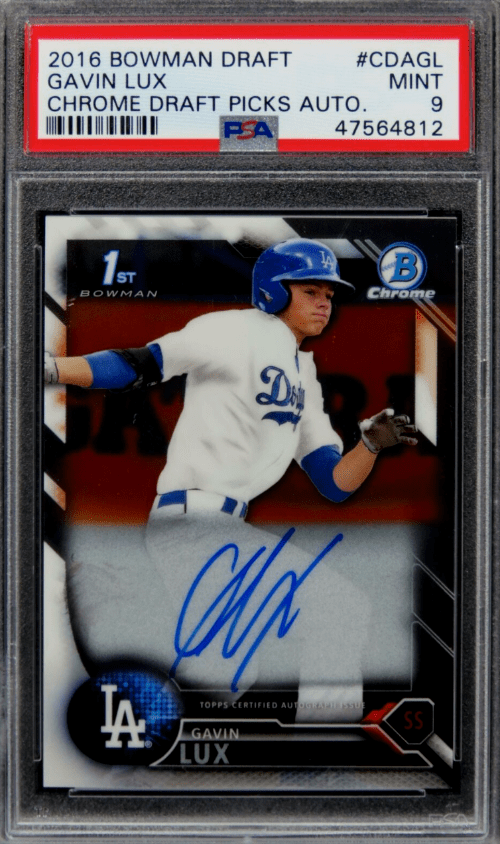 The 2016 Bowman Draft is his most popular rookie card at auction, thanks to a large autograph on the front and lots of rare versions to choose from.

There’s a Bowman’s 1st logo located in the top left corner, while the back features a Bowman Briefing;

“Resume: 2016 Gatorade Wisconsin Player of the Year… Hit .531 as a senior… Has participated in the Tournament of Stars, Area Code Games and Perfect Game All-American Classic.

Skills: Boasts the whole package at shortstop, leaving no doubt he’ll remain at position… Tremendous feet… Added strength to bolster his hit tool… Has frame to handle even more weight and muscle.

Up Close: Nephew of Augie Schmidt, who was No. 2 pick of 1982 MLB Draft (Blue Jays)… Committed to Arizona State.” 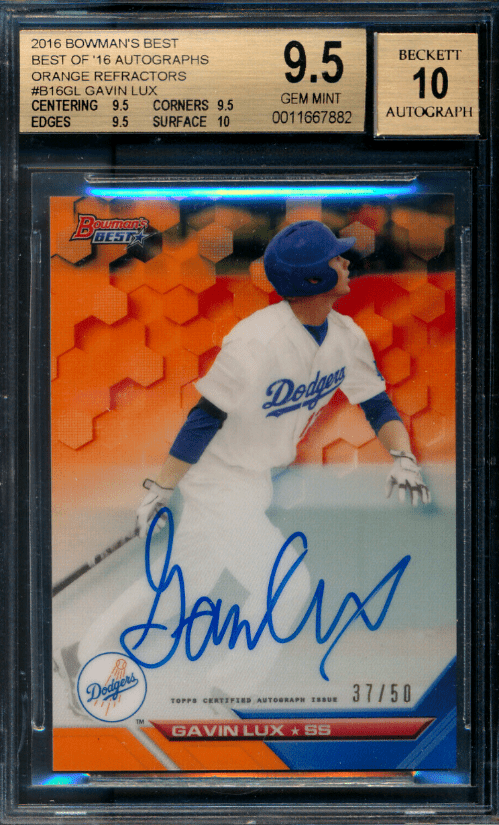 The 2016 Bowman’s Best is similar to the other one on our list in some respects. Expensive, rare parallels include base refractors, Orange Refractors (#50), Atomic Refractors (#25), Red Refractors (#5) and Superfractors. The back quote reads;

“Best 2016 game: May 18: Indian Trail (Wisc.) High School easily disposed of Arrowhead, 11-4, behind Lux’s two home runs and five RBI. MLB.com: “Lux has advanced instincts in all phases of the game . His tools are catching up, as he has improved his strength, swing, speed and arm in the last year… [He] should be able to remain at shortstop… He has reliable hands.”

The front image features Lux after a successful hit, watching the baseball fly as he’s in mid-sprint. There’s a large signature featured at the bottom, along with a hexagonal design along the top of the card.

While the base card can be bought for around $30, a PSA 10 refractor sold for $348, while a black version sold for $407. There’s a good range of options depending on your budget. 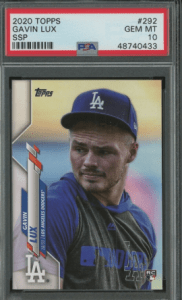 We really have enjoyed Topps printing these SP and SSP rookie cards within the last few years and the 2020 Topps Gavin Lux SSP RC #292 is right up there with the best (check out the Juan Soto or Ronald Acuna Topps RC SSP Topps cards).

Visit GoldCardAuctions.com for all your sports card investing needs!

A great option for buyers that like to avoid the traditional rookie card.

While there are great autographed cards already listed on this list, there is one more that we felt was worth mentioning. 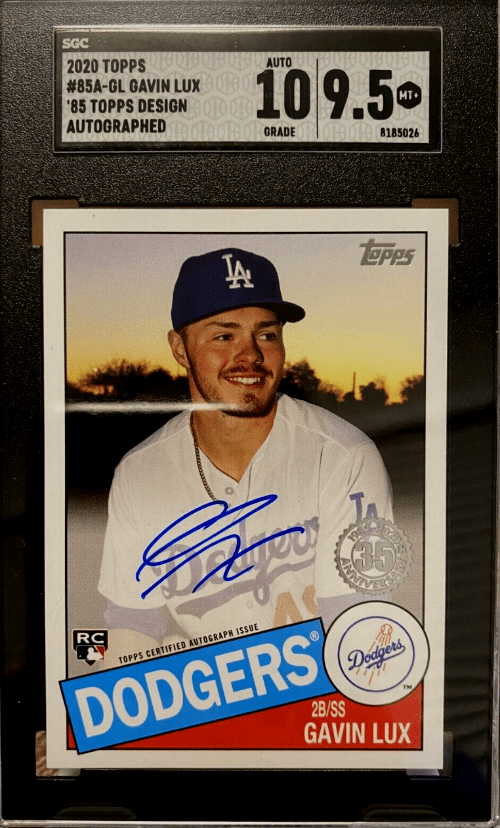 This card is created in a throwback manner, produced with the simpler designs from baseball cards of the 1980s in mind.

The Gavin Lux 1985 Topps Series 1 Autograph card features a photo of Lux with a big smile on his face, wearing the storied white Dodgers jerseys.

A big blue Lux autograph is the main feature of the card and it takes up a significant amount of space in the middle, catching the eye upon first glance.

This is a great option for those looking to chase a Lux autographed card and believe in his future in the MLB. The throwback card design is very clean and harkens back to a simpler time in the industry.

Pro-Tip: Don’t buy hobby boxes and expect a positive ROI as hobby boxes are a losing investment over time… BUT boy are they fun to rip into!

If you have a Gavin Lux rookie card and would like an estimated value please email us at value@goldcardauctions.com.

Looking to purchase a Gavin Lux rookie card? Email us at advice@goldcardauctions.com for advice. 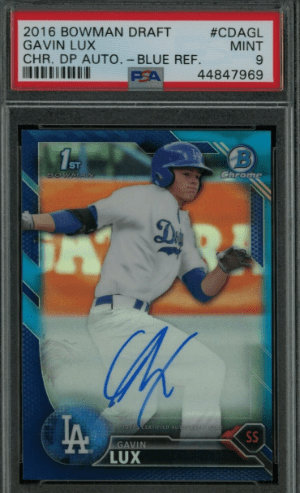 Lux’s stock has risen rapidly since making his MLB debut as the starting second baseman against the Colorado Rockies in late 2019. He scored three runs on the day, and he’s seen as the Dodgers’ top prospect heading into 2020.

Meanwhile, it looks like his team is determined to hold onto him for the long-term, fending off any and every offer that has come their way despite a championship drought and the opportunity for short-term gains.

Lux has a number of decent rookie card options from 2016, and prices are only going to go one way if he manages to keep putting in performances for the Dodgers.

He was clearly a highly talented prospect and he’s made the transition to playing in the big leagues, but we’ll have to wait and see whether he can keep up a sustained assault at the very pinnacle of the game.

May 2021 Updated: Lux is not off to the best start in 2021. Avoid buying Gavin Lux rookie cards until further notice.