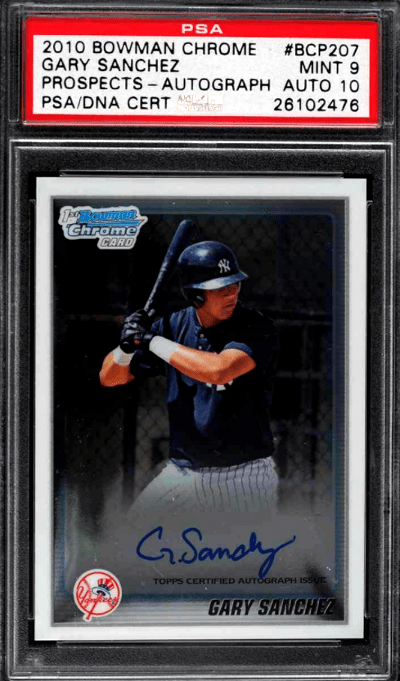 Gary Sanchez had a rough year in 2020. He hit an abysmal .147 in a sports town where doing so is tantamount to treason. The low point came when Sanchez was benched towards the end of the regular season—a clear vote of no-confidence as the Yankees approached the playoffs.

Have you heard the phrase “buy low”?

Sanchez, who is one of four catches in MLB history to have four 30-homer seasons before his age-27 season, is primed for a rebound.

When the rebound happens, you want to be holding one of these Gary Sanchez rookie cards in your collection.

Gary Sanchez’s rookie season was arguably his most well-rounded offensive year to date. He hit an impressive .299, clubbed 20 home runs, and knocked in 42 runs.

He did so with less than half as many at-bats as the following year when he hit 33 home runs.

The following cards are a testament to his rookie season. A mix of prospect cards and rookie cards, these are among the highest-value Sanchez cards available. 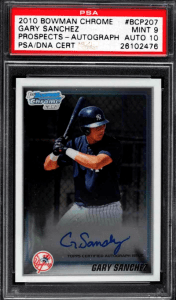 Gary Sanchez made his debut as a rookie for the Yankees in 2015, while his official rookie season came in 2016. So how is a 2010 Gary Sanchez card on this list?

Well, the 2010 Bowman Chrome Gary Sanchez RC is a prospect card. Think of it as a pre-rookie card. Nonetheless, it is one of the most valuable Sanchez cards that you can own.

In his image, Sanchez stands at the plate in a blue Yankee minor league uniform. A downward-tilted Yankee batting helmet obscures his eyes.

Despite the hint of his pinstriped pants, it’s clear that Sanchez is in the uniform of a prospect, not a big leaguer. A Sanchez autograph in blue ink sits towards the bottom of the card.

“The inclusion of this autograph makes the 2010 Bowman Chrome Prospect Autographs Gary Sanchez #BCP207 a card worth investing in.”

You may obtain this card at a bargain price, too. Don’t be shocked if you can purchase a Sanchez Bowman Chrome Auto for less than three figures.

There are several parallels for this card, each of which varies in rarity. Parallels include Gold, Blue, Orange, and Chrome versions. 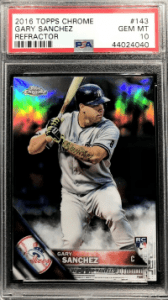 The 2016 Topps Chrome Refractor Gary Sanchez #143 comes in a number of different parallels. Each parallel is rare compared with the base version of the card, making them cards worth obtaining for your collection.

Topps’ 2016 Refractor cards have strong visual appeal as well. In his card, Sanchez stands at the plate with his left leg lifted in anticipation of the coming pitch.

His left forearm tattoo is prominently displayed. The cuff of his grey jersey sleeve, along with the number on his left sleeve, indicate that Sanchez is wearing a road grey uniform.

A Yankees logo sits within a diagonal column in the bottom of the card’s left corner. It intersects with a red nameplate reading “Gary Sanchez” and “C” for catcher.

The colors that reflect off of the card’s chrome background will depend on the specific parallel that you purchase. Some parallels, like the Orange Refractor, are especially rare.

Graded versions of this card can run from shy of $100 to a few hundred, depending on the quality and rarity of the parallel.

Securing one of the many parallels of this card could bring you even stronger returns than the base Refractor card can—though the base model is certainly worth owning.

The base card features Sanchez with a beige bat in hand. He wears his blue Yankees batting helmet with two ear covers, a hint that this is an image of him while he was a minor leaguer.

The left side of the card has “Sterling” listed vertically. Just below Sanchez’s belt is his signature written in the blue ink so commonly chosen for sports card autographs.

An easy-to-miss “Sanchez” is placed vertically from bottom to top in the bottom-right edge of the card. The design of the card revolves around the image of Sanchez and his signature.

Expect to pay near or more than one hundred dollars for graded, mint versions of this card. If prices swell beyond this point, don’t be surprised.

None of this Sanchez rookie or prospect cards are going to break your bank. They generally fall in the three- to four-figure price range, and typically not at the high end of that scale.

As with most cards, the value of a Gary Sanchez RC will depend on:

Looking for an estimated value of your Gary Sanchez baseball card? Email value@goldcardauctions.com or DM us on the Gold Card Auctions FB page.

When Sanchez is back to his dinger-hitting ways in 2021, remember that we told you to invest while the iron was cold.

Once upon a time, we might have considered buying a Sanchez rookie card but those days are long but forgotten.