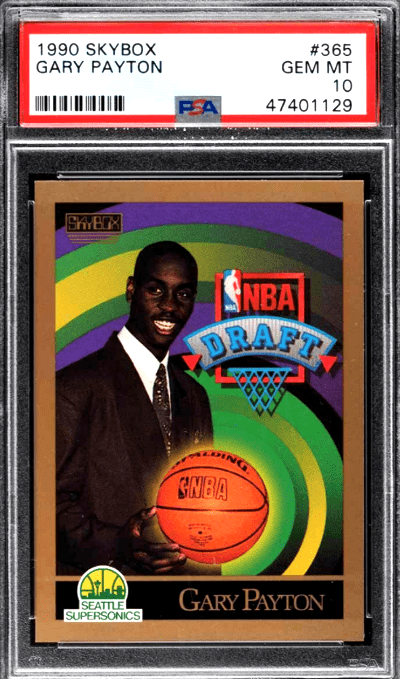 Gary Payton (07/23/68) is a legendary former point guard who spent 13 seasons with the Seattle SuperSonics.

He went on to feature for the Milwaukee Bucks, the LA Lakers, the Celtics, and Miami Heat respectively.

Payton still holds franchise records in points, assists, and steals for the Sonics, and he won a sole NBA Championship in 2006 with the Heat.

Seen as one of the greatest point guards in the history of the sport, his rivalry with Michael Jordan pushed the popularity of basketball to new levels in the 1990s.

Here’s everything you need to know about the best Gary Payton RCs, with info about three great options, along with investment advice looking at the next few years.

We’ve looked at auction data to bring you a trio of the most important Gary Payton rookie cards according to recent sales. 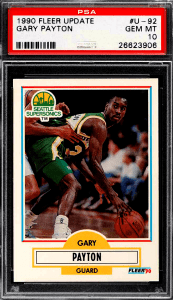 As the name suggests, the 1990-91 Fleer Update was released as part of their 100-card update set.

It’s the preferred rookie card for the majority of collectors, featuring a crisp image of Payton dribbling, and a Seattle Supersonics logo in the top left corner.

As with the majority of NBA cards from the era, Fleer’s Payton RC is the best that money can buy thanks to the classic design and brand recognition. 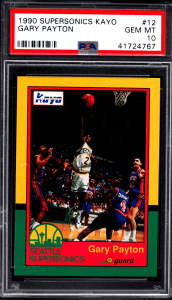 The 1990 Supersonics has a great design, with green and yellow to match the team logo. An illustrated photo of Payton reaching up to dunk is a great touch, helping it to stand out from the rest.

The trim is complete with red and black, and it all comes together perfectly.

It’s nowhere near as valuable as the Fleer, but it’s an attractive option that gives you a choice of Payton RCs. 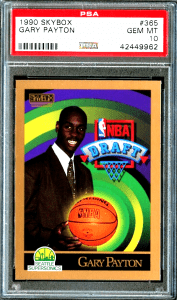 Like many cards from the era, the 1990-91 Skybox looks as though it was created while the designer was on hard drugs.

There’s a weird multicolored circular background, with an image of Payton in a suit with a golden-rimmed basketball semi-floating in his hand. It’s trippy, and the border doesn’t match up well either.

The large NBA Draft logo takes up a large section on the front, but it’s still a piece of history, and it’s an affordable Payton RC option. 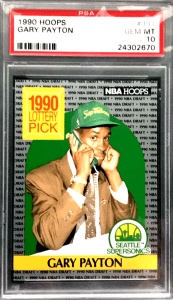 The Gary Payton Fleer RC should average out to be his highest valued rookie card.

The Payton Kayo rookie card will be his cheapest and is best for investors looking to spend as little as possible on a GP rookie card.

Payton’s involvement in everything from movies to community work has helped to keep him in the public eye, while his rivalry with Michael Jordan helped to elevate the game to new levels.

His trash-talk was legendary, and he had the skills to match his rapid motormouth.

He was inducted into the Hall of Fame in 2013, while he was recently featured in The Last Dance doc, showing off convincing displays as he shut out Jordan in Game 4 of the 1996 NBA Finals.

Unfortunately, Payton’s rookie card prices haven’t reached the levels you might have expected, despite strong design choices for the likes of his 1990-91 Hoops and 1990-91 Skybox.

As an investment piece, the Fleer Update is the best bet by far, as long as you’re looking at high-graded versions.

Given the undervalued prices, it’s best to keep an eye out for PSA 10’s only, as they’re generally available in the low three-figure range.

The Supersonics and the Skybox are generally worth half as much, even for a crisp PSA 10 that is as fresh as the day it was first produced.

Despite the low prices, Payton’s RCs are a decent investment in that you’re unlikely to lose any money, while they should continue to rise slowly given the increased interest in the era thanks to MJ.

CTA – A great set of cards from the early 90’s, Gary Payton’s RCs are underpriced, and could be a great long-term investment. Do you plan to grab a copy or two? Let us know in the comments section below!

Check out our list with five rookie cards that could double your money in 2020, or read on about how investing in sports cards can give you double the return compared to the stock market.