Gardner Minshew rookie cards are a hot ticket item as many in the hobby expect big things from the kid in just his second season with the Jaguars.

Which Minshew rookie cards should you be buying if your in this camp? Keep reading to find out! 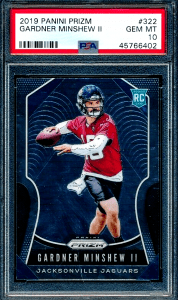 Gardner Minshew II was drafted by the Jacksonville Jaguars in the 6th round (178th overall pick) of the 2019 NFL Draft.

The kid was a long shot but came out guns a-blazing in his rookie season passing for 3,271 yards to go along with 21 touchdown passes and a 91.2 QBR… not bad… not bad at all for a rookie.

As you can imagine Gardner Minshew rookie card values took of as collectors were intrigued by the 6th rd pick with the bushy mustache.

His first-year performance was enough to earn him the starting gig heading into the 2020 season and some are calling for a break out ayear while others are predicting an utter collapse.

If you are in the first school of thought here are the Minshew rookie cards you will want to invest your hard earn cash in.

The Minshew Prizm rookie card may be your best bang for your buck.

Numbered #322 the card shows Minshew in his practice jersey while in mid-throw.

This Prizm card is our bet for delivering the best return on investment (ROI) should Minshew blast off to stardom.

One of the best investments in the hobby? Tom Brady Rookie Cards 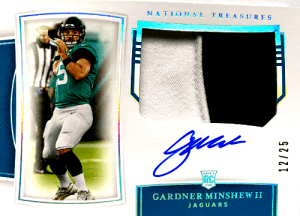 This should be the most expensive Gardner Minshew rookie card regardless of what he does over the next few years.

Numbered #198 this National Treasures card shows Gardner chucking the pigskin downfield for what is hopefully a completed pass.

This bad boy also includes a game-used patch and an autograph! WOOT WOOT!!

Rookie of the year? Cee Dee Lamb rookie cards are a good buy 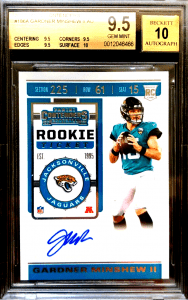 The Minshew Panini Contenders rookie card barely squeaks out a win over the Panini Flawless (both are super nice cards and it could go either way really).

Numbered #186 the card shows Minshsew dropping back in the pocket, scanning the field for an open wideout or tight end.

A nice card for the moderate bankroll.

Minshew rookie card values are fairly affordable unless you’re talking about super high-end National Treasures which will cost into the low thousands… but otherwise, a few hundred is reasonable.

BUT this is 100% subject to change heading into 2020 and could go either way.

Gardner Minshew rookie card worth estimate? As always email us value@goldcardauctions.com with 2 photos at a minimum and we will try to get back with you in 72 hours or less (also hit us on the Gold Card Auctions Facebook Page). 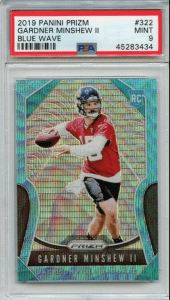 A good read: Most Valuable Football Cards from the 1990s

As we alluded to earlier in the article we feel the 2019 Gardner Minshew II Prizm rookie card is going to be your best buy when it comes to ROI.

This is ideal for moderate bankrolls as the card will cost under $100… cheers! 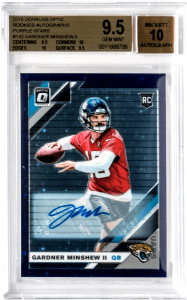 The kid obviously has some talent based on some of his games in 2019, he just needs to put it all together which may be easier said than done in Jacksonville where QB having been dying like honey bees lately.

If we were forced to put a million dollars one way or another we would lean slightly towards breakout over bust 52% to 48%.