This page contains affliate links, meaning we get a commisiion if you decide to make a puirchase through our links, at no cost to you.

Possibly the most successful TV show to ever hit streaming services, The Office has single-handedly kept Netflix going through lean times.

The point is, it’s up there as one of the most popular shows ever, so The Office Funko Pop! figures are always in high demand.

Let’s check out the best The Office Funko Pop characters from a long-term investment viewpoint.

15 to 20 years from now, we feel the ROI on the following ten Funko Pop The Office characters will be mind-blowing, and if not, heck, they only cost as much as a monthly subscription to Netflix. 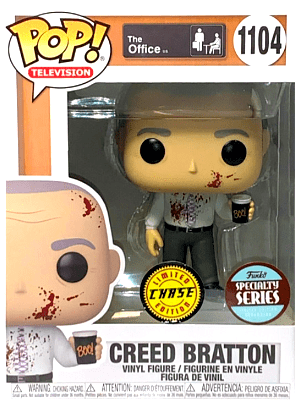 Our top pick is Creed Bratton aka the quality assurance director at Dunder Mifflin. He is known for his criminal acts. This is the Bloody Chase Variant. 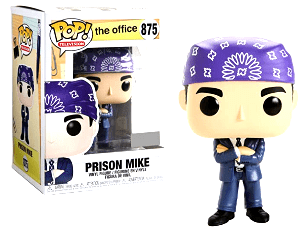 ‘Prison Mike’ is what happens when Michael finds out one of the members of staff is a convict. One of the most popular episodes of the Office of all time. 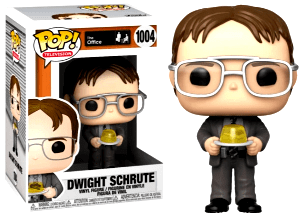 Sometimes the most popular character of a show is overrated. 100% not the case with Dwight Schrute. Must have Funko Pop Investment. 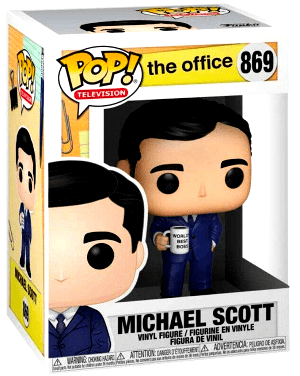 Michael Scott is the main character from The Office and is sipping coffee out of his  “World’s Best Boss” cup. 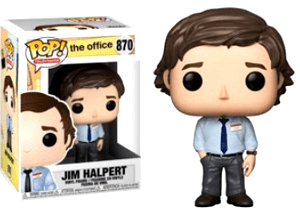 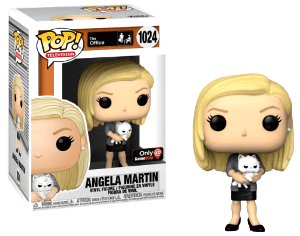 Angela Martin and her creepy cat Sprinkles are the talents in The Office Funk Pop #1024. 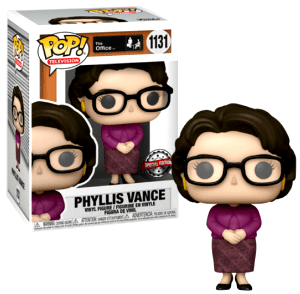 Super rare and almost never up for auction on eBay.

Was canceled due to her outfit being too sexy. Yes, that is a true story, unfortunately. 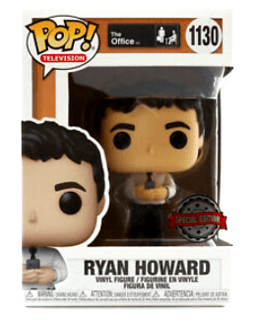 Ryan Howard is another popular Funko Pop figure and with good reason as he was the most underrated character on the show in our opinion.

Pam’s hands clasped together, and she’s wearing a pink cardigan. Beloved by The Office fanboys but we are not fans of her.

Here’s a full up-to-date list with short descriptions for each of The Office Funko Pop! figures.

There are 45 to collect, including a couple of double packs which are found at the bottom.

The boss man himself, Michael Scott is the main character from The Office for the majority of the show’s run.

Often one of the only sane members of staff, Jim Halpert is best known for pranks and looking at the camera.

The base Jim Halpert Funko features him in his normal office clothing.

A Chase Pop is a rare variant of a common Funko Pop figure, with a different design compared to the original.

Jim’s #870 Chase is similar in design, but focuses on his idea to dress up as FaceBook for Halloween. Instead, he ends up being called ‘Bookface’.

Personally my favorite character, Dwight Shrute is the assistant (to the) regional manager at Dunder Mifflin.

Instantly recognizable in a mustard shirt and brown suit, this is the first of many to feature him in some capacity.

A Target exclusive, this Chase Pop features Dwight with a full head of blonde hair, instead of the brown seen with the base edition.

You’ll also spot a small ‘Only at Target’ sticker on legitimate versions.

Pam Beesly went from receptionist to salesperson, to office manager during her time on the show.

The #872 Funko has Pam’s hands clasped together, and she’s wearing her customary pink cardigan.

There are no variants or rare editions to look out for.

The warehouse manager until he takes a job upstairs, Darryl Philbin is depicted with a clipboard held in his left hand.

You’ll also be able to spot a small name tag on his warehouse shirt.

“Why waste time say a lot words when few words do trick?”

Kevin Malone is another great character from the series who works in accounting.

Along with the Toby vs Michael duo set listed below, this completes the original base set of The Office Funko Pop! figures.

‘Prison Mike’ is what happens when Michael finds out one of the members of staff is a convict. He dons a bandana and attempts to scare them straight.

The Pop is a standalone release that also happens to be a Hot Topic exclusive. (It’ll have a small yellow sticker on the front.)

As you may have guessed, Michael is ready to break it down, with folded arms and his purple headwear.

Dwight’s uncle Eldred used to build a maze out of hay bales for kids to play in. Eldred called it Hay World but changed it to Hay Place after lawyers were brought in.

The Hay King version (#872) features Dwight after being crowned, with a hay crown and a red cape.

It’s a Walmart exclusive, so look out for the blue sticker with its logo on the front of the box.

Jim is wearing a black and gold suit, with sparkly face paint, while he’s holding a pistol and an explosive puck in either hand.

You’ll find a circular ‘Special Edition’ sticker on the front.

Andy Bernard joins in the third-season premiere, merging with the Scranton branch where he goes on to become the regional manager.

Fond of singing and theatrics, Andy is depicted with a banjo in both hands in this Special Edition figure.

One of many pranks saw Jim dress up as Dwight, as seen in this Special Edition release.

It looks almost exactly the same as the base Dwight version, although the suit is shinier and his hair is lighter.

Now we’re getting to some of the rarer releases. Jim’s ‘3-hole punch’ Halloween costume perfectly highlights his blase attitude to work and the idea of dressing up.

There are three black circles on his shirt, and he has a cup in his hand.

As for the increased price tag, it was originally a funkoshop.com Limited Edition release, and will easily sell for over $100.

Another rare release features Dwight with balled fists, while it also happens to be a Limited Edition which was exclusive to the 2019 New York Comic-Con fall event.

Rather than his yellow shirt, he’s wearing a dark suit, while he’s holding a Dwight bobblehead in his right hand.

Look out, ladies. ‘Date Mike’ sees Michael don a Kangol cap and a snooker cue, and it was originally a Go! exclusive.

It’s based on the season 6 episode Happy Hour.

Released as part of a mini-set focusing on Christmas episodes, the first to make the list is Dwight, as Elf.

As the assistant to the regional Santa, he dishes out presents in the episode, although he’s wielding a makeshift pistol and a gear in the #905 model.

Dwight just loves to play dress-up. Leaning on his German heritage, this statue depicts Dwight as Belsnickel, who visits children in the weeks before Christmas, asking whether they’ve been nice or naughty in the preceding year.

The outfit is faithfully depicted, with a whip, club, and leaves and sticks attached to his hat.

Classy Santa is the final statue found in the base Christmas collection.

Michael attempts to add a level of sophistication to proceedings by donning a smoking jacket and a Xmas cap when he hears that Holly is making a return to the office.

None of the Christmas models is limited edition and should be fairly easy to find on the resale market.

A For Your Entertainment! exclusive, the #927 Dwight variant features him wearing a Hannibal Lecter-like face mask, by way of a CPR dummy.

The first Dwight Recyclops figure was released as part of the 2020 Emerald City Comic Con collection.

You’ll find a Limited Edition sticker on the front, while he’s holding a flower box.

“I wake up every morning in a bed that’s too small, drive my daughter to a school that’s too expensive, and then I go to work to a job for which I get paid too little. But on Pretzel Day… Well, I like Pretzel Day.”

The one day in which Stanley Hudson is happy, the Gamestop exclusive Pretzel Day figure features him with a snack in hand.

Another prank courtesy of Jim, Dwight is featured with a stapler wrapped in jello in the #1004 figure.

This is the first in the second set of five base Pops.

A Michael Scott variant, this is based on “Survivor Man”, which is the eleventh episode of the fourth season.

Stanley is shown some love with dapper attire which includes a white suit in the next model. As he’s on holiday, he has sunglasses in hand.

Meredith’s idea of casual Friday might be a little different than the norm, and her revealing outfit eventually caused it to be canceled.

If you look close enough, you’ll even spot some pixelation.

Kelly Kapoor also features for the first time in her denim casual Friday outfit. From 1004 to 1008, that concludes the second base set.

Dwight is back in another Funko Shop Limited Edition release. He’s holding “Princess Unicorn”, a toy that he sold for a huge profit margin in the episode “Moroccan Christmas.”

A great figure for Star Wars fans, this alternative Dwight model is part of the Funko Speciality Series.

He’s depicted as a Sith Lord, suiting his character well.

A variant of Recyclops, this is a 2020 San Diego Comic-Con exclusive.

Angela Martin is back in all of her creepy glory, holding her favorite cat Sprinkles in this GameStop exclusive.

The final Dwight Recyclops variation was made available at the 2020 New York Comic-Con event.

In one of the more famous scenes, ‘Michael the Magic’ attempts to escape from “extreme bondage” (a chained straitjacket, in reference to famous magician Harry Houdini).

This is the first in another base set of four.

Next is Dwight as the ‘Scranton Strangler, a serial killer offhandedly mentioned throughout the series.

Jim is back, holding a sign that says; ‘’six days since our last nonsense”.

She’s holding a candle and a large glass of wine, and it’s the final figure from the base quartet.

Kevin is featured in the first exclusive, courtesy of BoxLunch. He’s wearing Kleenex boxes for shoes, as well as sporting a toupe for the wedding.

Dwight has a wig for everyone in The Office and dresses up as Pam in order to trick Jim.

Used to ‘celebrate’ larger people, Michael Klump is one of the many alter egos that Michael Scott created during the show.

Another exclusive, this figure was available via GameStop.

Michael Scarn is the antagonist in Threat Level Midnight. (Written, produced, acted, and directed by Michael.)

You’ll find an ‘only at Go!’ sticker on the front, while he’s holding one finger like a pistol.

Andy has to compete in the Beach Games for a promotion, which is why he’s dressed like a sumo wrestler in this Target exclusive.

The Dundie Award is an Amazon exclusive, replicating the trophies given out annually in the Dunder Mifflin Scranton office.

Dwight appears in the episode Spooked dressed as Starcraft’s Sarah Kerrigan for Halloween.

As well as individual figures, Funko has also released a couple of double packs to coincide with the show.

Forget Compton, Dre Dr, and Ice Cube. It’s all about the electric city. ‘The Scranton Boys’ consists of Mike and Dwight, as they film a rap video.

It was released as an FYE exclusive.

Michael hates Toby. What better way to represent their rivalry than with a double pack?

The best place to purchase The Office Funko Pop Complete Set is going to be eBay and Amazon.

Visit Amazon.com or eBay.com and search the term “The Office Funko Pop Complete Set” to check out the availability and price tag.

The most valuable Funko Pop The Office character will be ones that are signed by the actual actor who played the character on the show.

The list of The Office Funko Pops continues to grow, with the following models due to be released over the next year:

It’s not too shabby for a show that originally wrapped up in 2013.

A complete collection is always tempting for would-be collectors, while many of the limited edition models have already doubled in price.

They have to be seen as a solid investment in the long term. 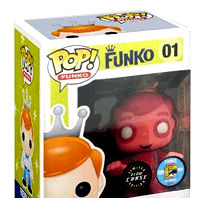 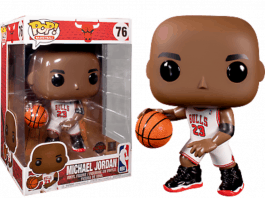 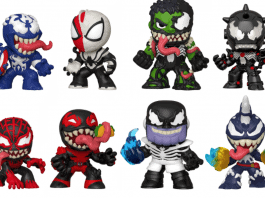