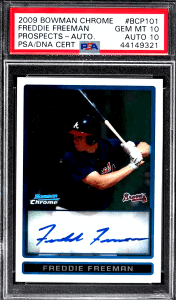 Freddie Freeman (09/12/89) is a first baseman who has played for the Atlanta Braves since being picked in the second round of the 2007 MLB draft.

His unorthodox style hasn’t stopped him from making four All-Star appearances, while he won a Gold Glove in 2018, and the Silver Slugger a year after.

He’s clearly a Braves legend, but which of his many rookie cards should you be on the lookout for, and why? Here’s everything you need to know.

With 14 official Freddie Freeman rookie cards and several popular prospect versions, there are lots of options to choose from. The prospects go back as far as 2007, although he was called up to the majors in 2010.

The most valuable early Freeman card that money can buy, his 2009 Bowman Chrome is a prospect that shows the player ready to swing. He’s in his Braves kit, with nothing of note in the background and an autograph located at the bottom.

Compared to many others it’s a somewhat basic card, but the background color will change depending on the theme of the parallel. 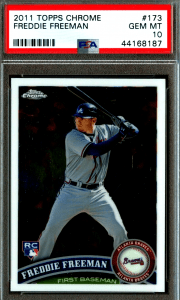 The 2011 Topps Chrome is a bonafide rookie card, complete with the prerequisite RC logo located on the left-hand side. As with the Bowman Chrome, it features an image of Freeman standing ready to bat. An on-card signature completes the card, making it another interesting option for collectors and investors. 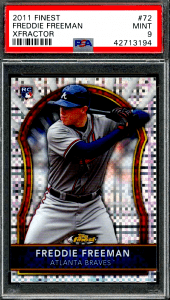 Another card that comes with a range of rare parallels, the base 2011 Finest is great if you’re looking for a budget RC. It has no patch or auto to speak of, so we’d keep an eye out for the Die-Cut Mosaic parallel if possible.

The Die-Cut is a landscape card, with a refractor background and a stickered autograph. It also has a couple of player patches, although they admit that “the relic contained in this card does not come from any particular event, game, or season.”

Despite the drawbacks, rare parallels will sell for a similar price as the 2011 Topps Chrome, so it’s another decent investment piece from Freeman’s rookie year. 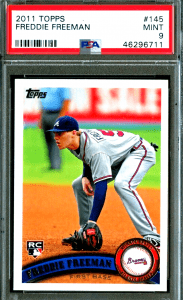 The future looks relatively rosy for Freeman, as he’s rumored to be ready to sign a contract extension with the Braves.

He’s been the face of the franchise for almost a decade, and he’s still in decent form heading into the 2020 season. (Minor surgery to remove a bone spur in his right elbow notwithstanding.)

Freeman’s rookie cards aren’t likely to rise much in the next few years, despite the fact that he’s a clear fan-favorite for the Braves. In fact, they’re already slightly inflated due to his back-to-back NL East division wins in 2018 and 2019.

However, a third would surely cement his legacy as one of the best first basemen of the era, and they’re cheap enough to be a risk-free investment at this stage.