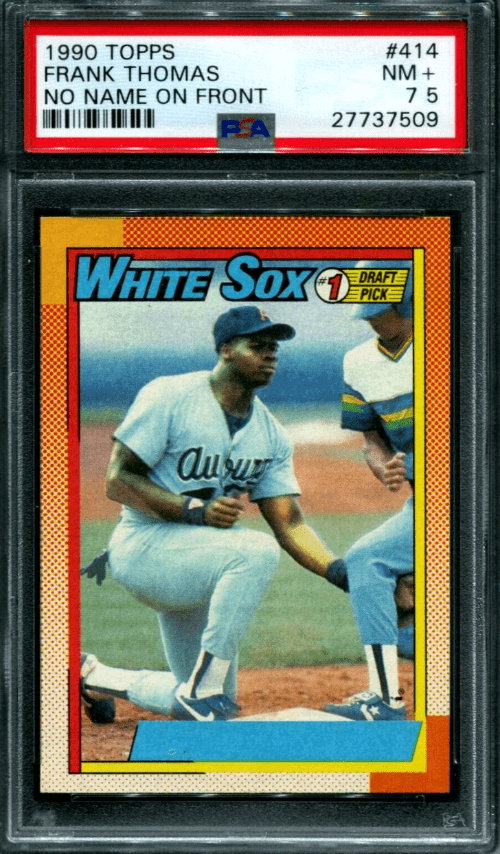 Hall of Famer Frank “The Big Hurt” Thomas is one of the most feared sluggers in Major League Baseball history. Opposing pitchers shudder at the thought of facing Thomas, a designated hitter who can hit home runs with gusto.

Thomas was born on 5/27/68 in Columbus, Georgia. He was a three-sport star in basketball, baseball, and football at Columbus High School. Thomas attended Auburn University on a scholarship in the autumn of 1986.

Frank “The Tank” made an immediate impact, recording an impressive .359 batting average as a freshman. He established a school record of 49 home runs at the end of his senior year in 1989. Consequently, he earned SEC MVP honors that year.

The Chicago White Sox made him the seventh overall pick of the 1989 MLB Draft. He made his pro debut against the Milwaukee Brewers on August 2, 1990. He spent the first 16 years of his career in the majors with the White Sox. Thomas also suited up for the Oakland Athletics and Toronto Blue Jays.

He signed a one-day contract with the White Sox and announced his retirement in February 2010. The team retired his No. 35 jersey on August 29, 2010. Four years later, Thomas was inducted into the National Baseball Hall of Fame as a member of the White Sox.

Thomas concluded his stellar baseball career with a .301 batting average, 2,468 hits, 521 home runs, and 1,704 RBIs… needless to say there were not many pitchers who got over on Mr. Thomas. 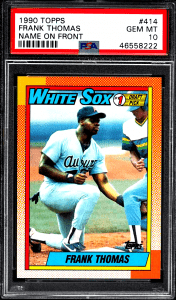 The standard Topps Frank Thomas rookie card is a great investment BUT if you can get your hands on the no-name error card your cooking with fire as many collectors in their 30s and 40s dreamt about owning this card as a child… many have the pocketbook to actually make that happen now!

Now this card isn’t on the same level as the 1989 Ken Griffey Jr. Upper Deck card but it’s not far off.

Please note this card also comes in a Tiffany version that is a GREAT BUY as well. 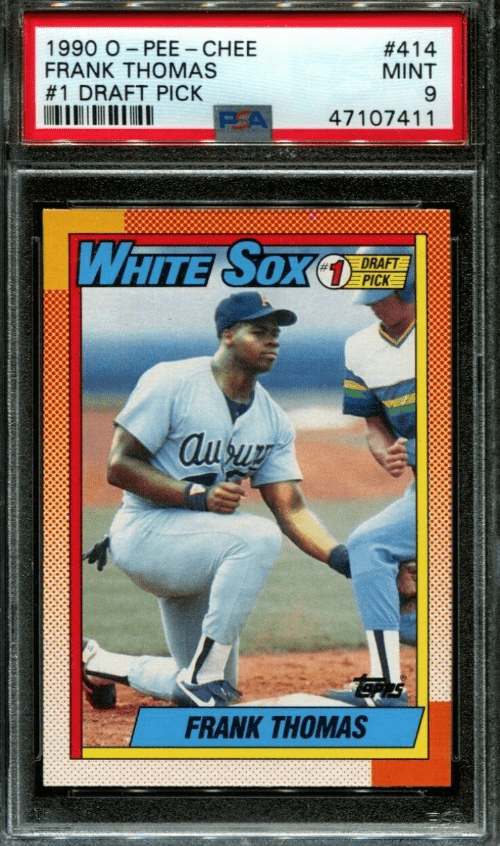 The Frank Thomas OPC rookie card is a great option for investors who are not looking to spend thousands of dollars on a rookie card as this card is very reasonably valued at even high grades.

Numbered #414 the card is the exact same image as the 1990 Topps RC… the low dollar figure makes it an excellent investment option with plenty of room to grow. 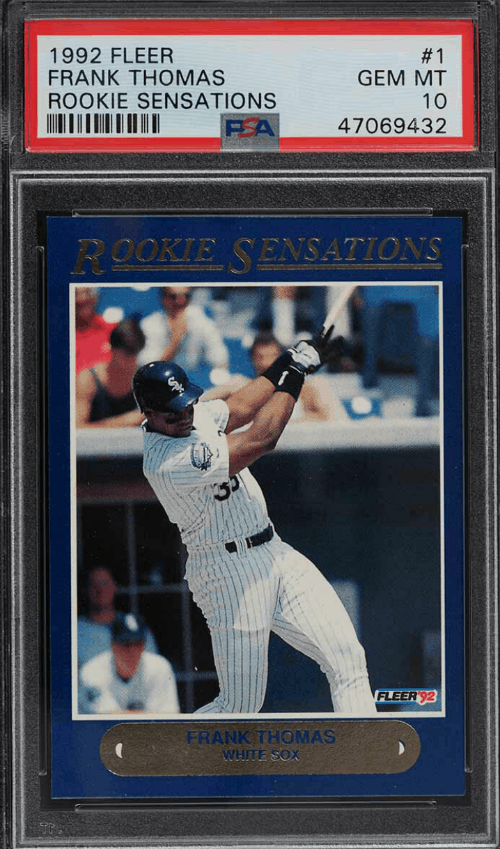 A super-rare Frank Thomas RC that will cost a boatload at high grades… but worth it if you have the bankroll to cover the cost! 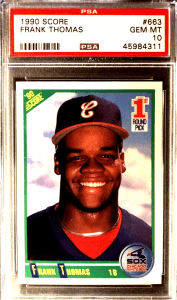 The Big Hurt was known for his smile. If you want his rookie card which features his famous smile, this is your best bet. In fact, it is a rare rookie card that has Thomas’s headshot on the front. Most of his rookie cards feature a full-body shot.

Not a baseball fan?: LeBron James rookie cards might be your bag

The back of the card reads, “Frank, the No. 7 selection in the draft, is a slugging 6’5”, 250-pound first baseman out of Auburn. He holds school records for career home runs and RBIs and set a single-season mark with 83 RBIs while batting .403 and hitting 19 homers in ’89. Frank batted a strong .279 for Sarasota in Class A Florida State League after signing with the White Sox.” 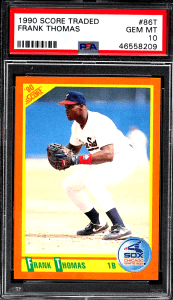 Score Traded had a good run and this Frank Thomas rookie card was one of their better cards ever produced.

Numbered 86T the card shows Frank in the White Chicago White Sox uniform fielding a ground ball… not the best-looking image but not the worse either.

This one is ideal for investors looking to spend a minimum amount of dough. 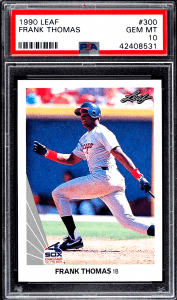 This card has several varieties on the market. However, we gave it the nod because of its affordable price and autograph (bear in mind only a few of Thomas’ rookie cards have autographs). The latter criterion ensures scarcity, which bodes well for the serious card collector.

On that note, we’re confident his card will gain traction in a few years’ time. 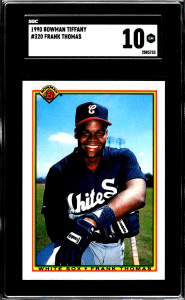 This card features a smiling Thomas in his blue Chicago White Sox jersey. It’s one of those cards with a “no fuss, no-frills” approach.

Plus, it doesn’t create a massive dent in your wallet. It should also give you a nice ROI in the future. What’s not to like?

In addition to the cards listed above, Thomas also has some rookie cards that show him during his minor league days. This card is the best investment option out of those ones. 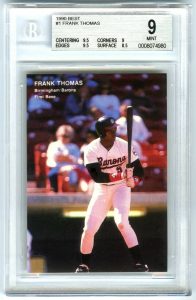 This card shows Frank Thomas while he was playing for the Birmingham Barons, the same minor league team that Michael Jordan played for just a few years later.

The card has no border and a blurred background that give it a unique aesthetic. It shows Thomas at the plate in the black and white Baron jerseys.

It has Thomas’s name and position in the upper left corner of the card, detailed in small white letters.

This is a good option for those that are looking for a basic card that has the potential to rise in price. 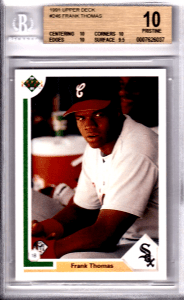 The most valuable Frank Thomas rookie card is the Topps No Name error card.

If your a middle of the road investor and not looking to spend a ton of cash but are not looking to skate buy at the minimum consider the Frank Thomas Score rookie card as its a great mid-level option. 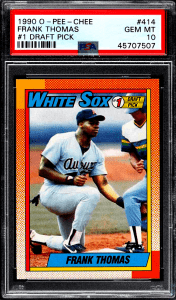 The internet would like to think there is a SUPER RARE Frank Thomas Donruss Rated Rookie Card but we found no evidence of such an existence and the tale has seemed to grown to urban legend status.

Let’s take a look at some of the recent Frank Thomas rookie card sales via eBay auctions so we can get an idea of how much you should be paying.

While most of Frank Thomas’ rookie cards don’t come from more reputable brands such as Panini and National Treasures, they’re still a great investment.

For one, we’re talking about a bona fide Hall of Famer and MVP.

The Big Hurt is one of the best hitters in the history of baseball.

This guy was a BEAST of a hitter… some of the highlights of Thomas’ career during that span include:

Second, most of his rookie cards are affordable. They should give you a nice return a few years down the line.