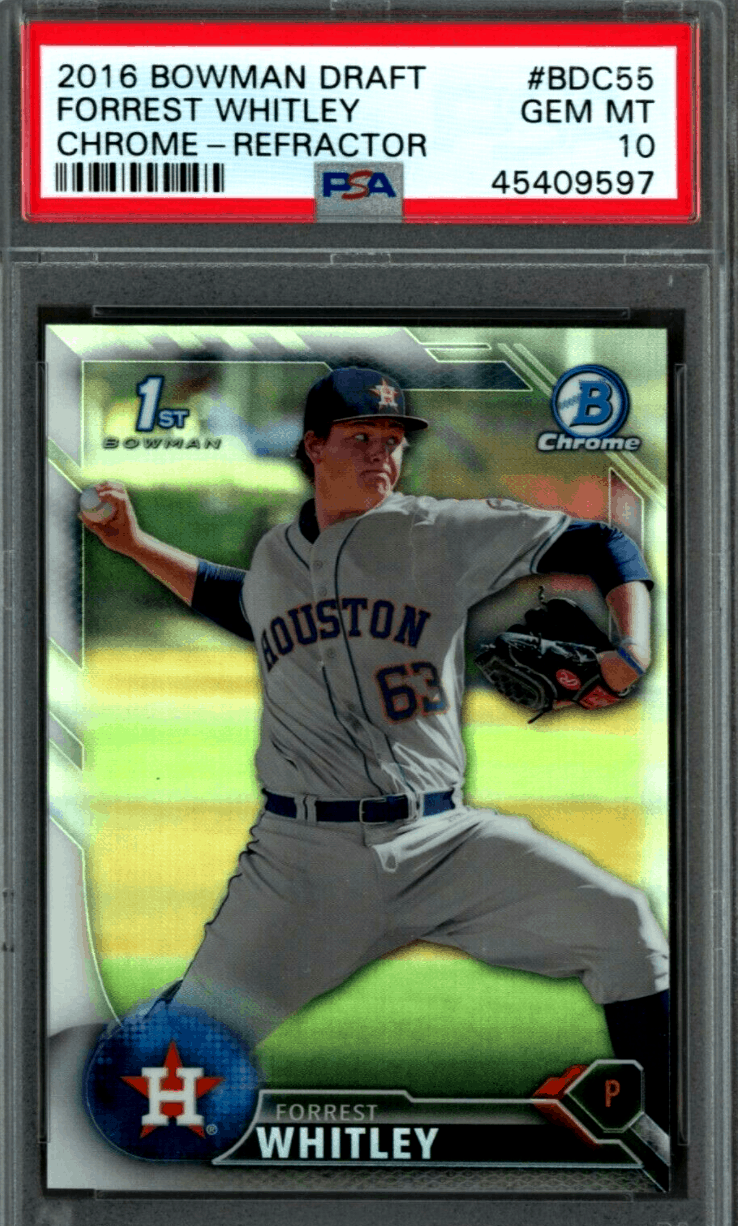 Forrest Whitley is a tall, gangly, pitcher that was drafted in the first round of the 2016 MLB draft by the Houston Astros. While Whitley hasn’t yet played a game in the major leagues, the young pitcher is the consensus best prospect in the Astros organization and looks to have a bright future ahead of him.

Whitley was committed to Florida State University to play college baseball but after being selected so high in the draft he chose to forgo his commitment and instead signed his first professional contract.

After being drafted as a young high schooler, Whitley managed to work his up to AA baseball in only his first professional season. Whitley has a strong rotation of pitches in his arsenal to bamboozle hitters led by his strong fastball.

However, Whitley’s career hasn’t been all sunshine and rainbows. In 2018, he had to serve a 50-game suspension for violating the minor league drug prevention and treatment program. On top off of that, in 2019 Whitley struggled at the AAA level as he pitched 24.1 innings over eight games and finished with a 12.21 ERA and a 0-3 record.

Still, Whitley has all the tools to become a legitimate ace in the MLB and if he can manage to smooth out some of the inconsistencies in his game, he will be able to fulfill the high expectations that have been placed upon him.

Here’s everything you need to know about Whitley’s best rookie cards and investment future.

While Whitley has not pitched an inning in the MLB at this point in time, there are still plenty of cards made that picture him. These cards have spanned from the time he was drafted in 2016 until this year’s cards made in 2020. Here are the top three that should be of interest to investors:

This card pictures Whitley in his grey Astros jersey as he launches a pitch towards the plate as he attempts to strike out another batter.  Bowman Chrome is one of the more popular sets in the baseball card industry and is always a good option for rookie cards.

The top left of the card has the signature “1st Bowman” decal printed onto it and that decal helps make the card more interesting to collectors and investors. However, the non-limited quantity of this card will limit the price and prevent it from reaching the sky-high prices that some other cards will reach.

Investors may buy this card in larger quantities to make up for the smaller upside as the higher quantity will multiply potential profits. 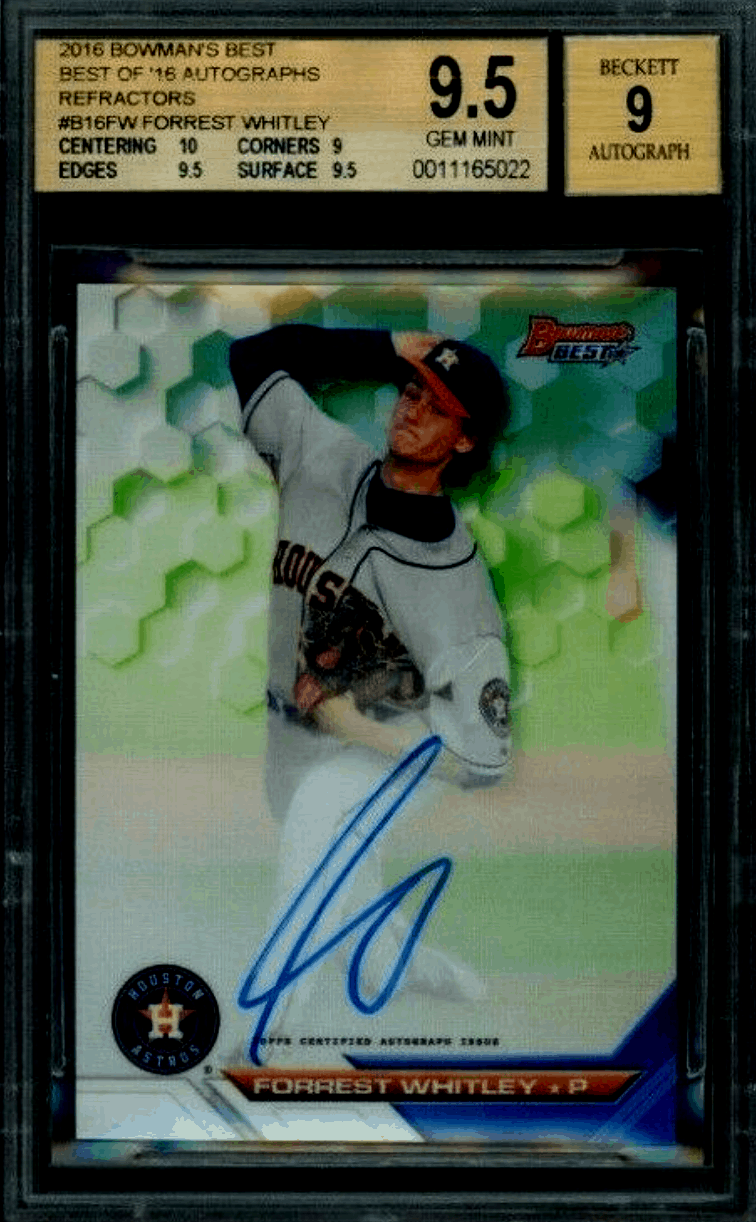 This card is one of the most visually appealing cards made of Forrest Whitley and features him wearing the white Astros jerseys as he is mid-pitch. The left side of the card has a puzzle-like pattern on it that helps create a unique design that has become synonymous with the Bowman Best subset.

The card is autographed, adding a unique twist that helps the value as well as the overall look of the card. Autographed cards are some of the most popular for collectors and thus this rookie card will be sought after by investors.

This card is a great option for investors who believe in Whitley’s future and want to hold a rookie card that also features an autograph from the top prospect. 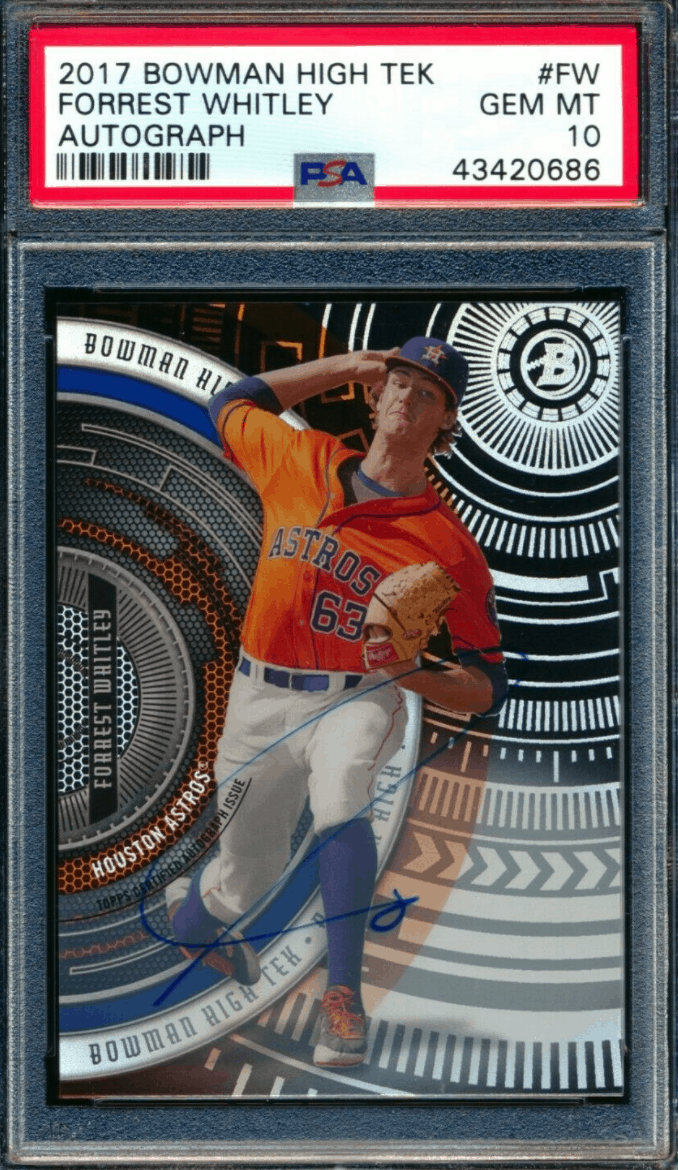 This is another autographed card that shows Whitley in the middle of his pitching windup. All three of these cards are produced by baseball card powerhouse Bowman. The High Tek set focuses on the best prospects in baseball and has an intricate background for each card. Only one pack comes in each box but in each pack you will find 10 cards from the High Tek set.

Just like the “Bowman’s Best” card, this one has an autograph printed onto the card and therefore has the desirable combination of being a signed rookie card. Investors will want to own one of these cards in their collection because as Whitley’s career progresses the value will rise.

The most expensive Whitley rookie card to date is one of the low-number 2016 Bowman Draft Chrome Refractors.

His top rookie card at the cheapest price (i.e. best bargain) would be the Bowman High Tek RC… we love the graphics on that bad boy.

If you would like advice before making a Forest Whitley rookie card purchase please DM us on the Gold Card Auctions FB page or email us at advice@goldcardauctions.com… cheers!

Whitley remains one of the best prospects in baseball and his devastating arsenal of pitches is enough to keep any batter awake at night. While he has struggled at points during his development, it is a completely normal thing and should only make him stronger in the long run.

No one knows how Whitley’s career will play out but with what he has shown us expectations are high. For investors, this may be the perfect time to acquire Whitley rookie cards as others may be scared or nervous before Whitley makes his major league debut. While there is more risk at this time, the reward is also much greater and Whitley looks like exactly the type of prospect to take such a risk on. Whitley could be the next great ace that dominates the league for years to come.

The Astros, while marred in controversy over their sign-stealing scheme, still have a very deep roster and look to be a strong team for the foreseeable future. When Whitley does make it to the major leagues, he can expect to be a part of a team that will see success and not has to force him into situations until he is ready.