Are you looking to take on some risk and, in return, have a high capital gains tax bill in 2023? Consider buying one (or more) of the following Football Rookie Cards in the next couple of months and then sell anytime during the NFL season (ideally towards the end).

We feel the following three football rookie cards (players) have a great chance to earn a double-digit ROI this football season based on the value of their cards currently. Considering some of these in a PSA 10 grade can run into the six digits, this could be a sweet windfall.

Here they are. Please do not hesitate to email info@goldcardauctions.com for any information or advice regarding investing in the following National Treasures RPAs. 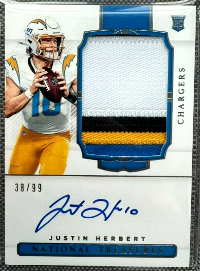 We have been touting Herbert’s rookie cards for the last few years, and although they have not been disappointed, they have not exploded with the expected ROI. It all could very well change in the upcoming NFL season. If Herbert finally has an MVP season, we have been expecting this card will explode, and a five-digit return on investment is a reality with the price of this bad boy. 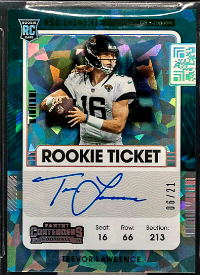 Trevor Lawrence had a rough 2021, which was expected given the team/atmosphere he had to deal with. His last few games of the season didn’t even look that great.

So are we nuts here?

We don’t think so, and those last five games gave us an even better deal on buying up a bunch of his Rookie Ticket/Playoff Ticket autograph cards at high grades. We will admit Lawrence is a much more significant risk than Herbert, but the payoff will be more significant if we hit on it. And if you simply Google “Trevor Lawrence,” you will find tons of positive news articles about Lawrence headed into 2022. PLUS, let’s not forget how much TALENT this kid has. His mobility alone should account for at least 3 or 4 TDs on the ground this year.

From Pro Football Talk: “Volume and some much-needed stability will be there for Lawrence in 2022. Only once in Pederson’s five years in Philly did the Eagles finish outside the top 10 in passing attempts. Throw in negative game scripts and a relatively benign schedule, and Lawrence could have a breakout fantasy season in 2022.” 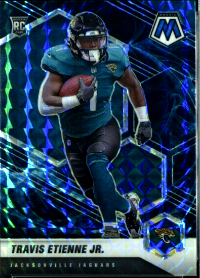 You can currently get Travis Entienne Jr. rookie cards at an ultra-discounted price. He went one spot behind Najee Harris in the 2021 NFL Draft. Harris has dozens of rookie cards sold in the four digits, while Etienne Jr. has only one, and his average rookie card value is nowhere close to Harris.

We feel Etienne will have a big 2022 due to being 100% healthy, being paired up with one of the league’s brightest young QBs (Trevor Lawrence), and his ability to catch the ball out of the backfield.

From Pro Football Talk: “By no means do I feel Etienne is a polished back. But when you score 78 touchdowns and averaged 125.8 scrimmage yards per game over your final three collegiate seasons, that translates to the NFL. Etienne should be heavily involved in the passing game, and with James Robinson still recovering from a torn Achilles, Etienne’s floor is that of a low-end RB2. Yet, his ceiling is closer to the top 12 in PPR leagues if the volume hits as expected.”