Floyd Mayweather (50-0-0) is undoubtedly one of the GOAT contenders, while time has been kind to his boxing resume and sporting legacy.

It’s easy to forget that Mayweather built a career on being hated, getting people to tune in to PPV bouts on the off-chance he would eventually lose his undefeated status.

Here’s a rundown with a trio of the most important Floyd Mayweather rookie cards and an investment outlook for the future.

Boxing cards are always difficult to collect, given they’re never released with any real regularity.

Regardless, the early Mayweather options that make a list are sure to catch the eye. 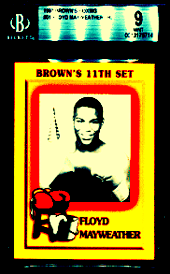 It was released a year after the young fighter had made his professional debut, which is sooner than most for many in the sport.

The old-school design features a black-and-white image of a young Floyd with a US flag and the Brown’s corner stool logo.

Red and orange are the background colors, ensuring it’s a card that is difficult to forget.

By 1999, Mayweather had won 20 fights and beat Carlos Rios for the WBC World Super Feather Title in one of many successful defenses.

He was also included in another Brown’s Boxing set, which is often more difficult to locate than the ‘97 RC.

This time, Brown has opted for a large, full-bleed image of the boxer, smiling at the camera with his fists raised.

It has a simple black background, with his name found in white text that matches his hand wraps.

2001 is where we’ll find the final Brown’s Boxing Floyd Mayweather Jr. release to make this list.

This time, Money is smiling at the camera from a closer angle and there’s a deep red background.

As with the 1999 card, it has a full-bleed design, making it difficult to locate at higher grades, while the reverse is packed with info.

Each of Brown’s Boxing cards is clean, but this argument has the best front/back of the trio.

If you want to buy, sell, or trade sports cards, please visit the Gold Card Auctions Discord channel now. You may also use that discord channel to request card values or obtain sports card investing advice.

Mayweather is one of the greatest ever, with an unmatched defensive style that kept him competitive throughout the years, and coherent in his later life.

He might have been a showman outside the ring, but he was always a professional when he stepped between the ropes with his career on the line.

Mayweather beat the likes of Manny Pacquiao, Canelo Álvarez, and Ricky Hatton in a Hall of Fame career, going on to knock out Conor McGregor while earning an estimated $100m in the process.

A fight against Logan Paul in June 2021 was a disappointing exhibition but proved that he’s still a draw against the right opponent. (Better still, most people watching wanted him to win, which must have been a great feeling.)

As for his early Brown’s Boxing cards, the 1997 RC is the best from an investment perspective.

If you’re on the market for the best boxing cards you could do far worse than any of the above options.