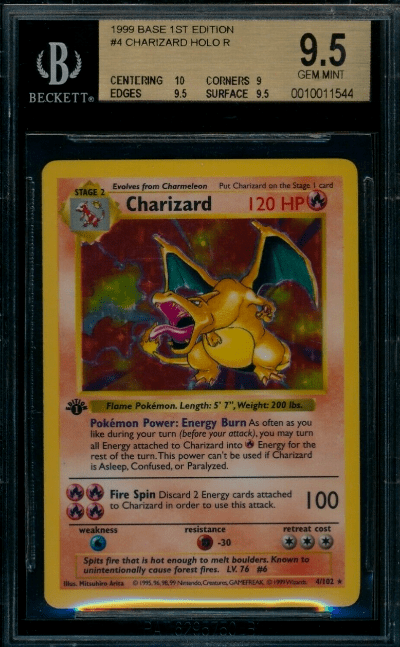 Anyone who has previously invested in first edition Pokémon cards is seeing the gamble pay off, with record prices recorded for many of the original pocket monsters.

The same is true for later releases, but it’s difficult to match the 1999 set in terms of interest or value.

Here’s everything you need to know about the best first edition Pokémon cards, including why some are more special than others, and which ones you should be looking out for.

With the most expensive first edition cards. there’s one major distinction compared to the collection you’re likely to have at home. Unlike the Base Set Unlimited cards (BSU), there are shadowless borders, while there should be a small ‘1st Edition’ stamp located just under the card image.

As well as the above, the card also needs to be in perfect condition if you’re hoping to see the highest prices.

Any shiny, shadowless 1st Edition Pokémon card will be reasonably valuable, but there are a few which manage to stand out from the crowd.

Charizard was the key to the original set and one of the most popular Pokémon from the era. That has continued to the present day, while prices continue to rise for shadowless versions. Rapper Logic bought a copy for $220,574 in October 2020, and the record was soon broken in December 2020, when a Charizard sold for $369,000. A report about the sale noted:

“Confirming that the Charizard craze is not slowing down was an additional sale through PWCC on eBay which also broke the $300,000 USD threshold. This card belonged to a collector who bought the card in 2009 for $700 USD, selling it a few days ago for $350,000 USD.” 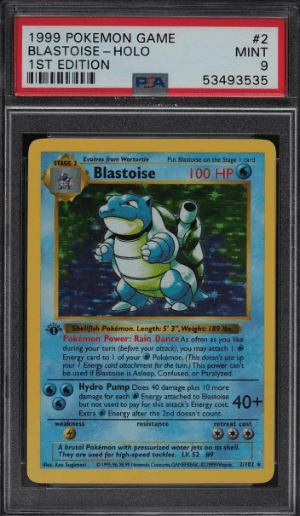 One of the few Pokémon that would give Charizard a run for his money in-universe, Blastoise is another of the original starters, in their fully evolved form.

“Along with Venasaur, 1999 shadowless versions are always popular, even if they can’t match up to the card seen above in terms of pure values”

As always, pristine copies are coveted, while it’s worth noting that Blastoise was the Pokémon Blue cover star. If you can’t afford a PSA 10 Charizard, this is definitely the next best thing. 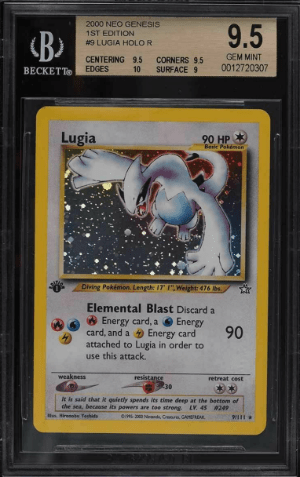 Let’s switch things up, moving on to a set that was released the year after. Lugia was the cover star for the next round of Pokémon games, and while he might not match up to many older options, it’s still a card that is highly prized by collectors.

A white background is the source of a number of issues that are also seen with the 1999 Chansey card below, leading to higher values than the norm. There are often problems with the lining too, so there are only 41 PSA 10 examples out of almost 1300 that have been submitted. 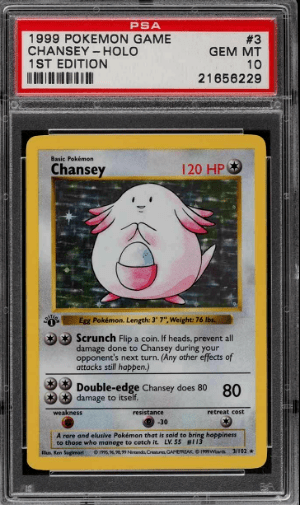 Chansey? Compared to the others, it’s not the most important Pokémon to make the list, but it’s still exceptionally valuable if you’re looking for perfect copies.

Due to manufacturing issues that caused significant scratching on the holographic foil part of the card, the 1st Edition Base Set Chansey has consistently ranked among the most difficult cards to grade ever released by Pokémon with a PSA 10 population of just 46 copies. 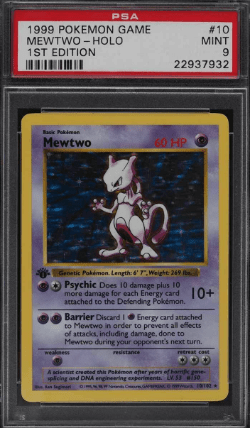 Mewtwo was the star of the first film and one of the more mysterious Pokémon from the original batch of 151. In the present day, the first edition card is still extremely valuable and was the tenth card in the set.

There are currently 80 PSA 10 graded copies of the Mewtwo card, and they’ll easily sell within the five-figure range. The most powerful of the original Pokémon, only the cards saw above tend to be as valuable. 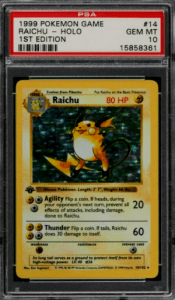 How to get first edition Pokemon cards?

The best place to obtain first edition Pokemon cards is on eBay auctions. If you get lucky and search hard enough you may find one for much cheaper than the actual value.

As you can see, the best first edition Pokémon cards contain some of the biggest names, and there’s a distinct preference for the 1999 set. Most of the shiny cards have been long forgotten, and PSA 10 graded (read: PSA Grading or SGC Grading) shadowless versions often have fewer than 100 copies.

“That leads to increased rarity, and the extreme prices we’re seeing this year. It’s only expected to continue as time goes by.”

There’s been a massive influx of interest in the hobby in recent months, probably fueled by the record-breaking Charizard purchase for the most part.

For the best investments, it’s hard to beat the original 151, or exceptional cards such as the Neo Genesis 1st Edition Holo Lugia.

Are 1st Edition Pokemon cards worth anything?

No 1st Edition Pokemon cards are not made/manufactured anymore.

What is the rarest Pokemon card?

Why is 1st edition Charizard so expensive?

1st edition Charizard is so expensive due to the lack of availability of the card and in good condition. 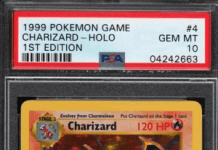 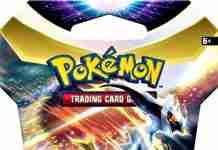 What Expansion Pokemon Pack to Buy in 2022