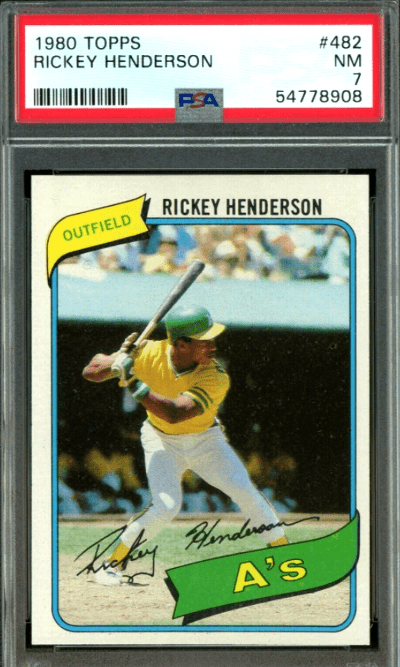 Speed isn’t everything, but it’s one of the five tools that help to shape some of the greatest baseball players ever.

Access to speed leads to stolen bases, distracted pitchers, and fielders who rush their throws. It makes everything snappier, and it’s devastating to have to deal with from a defensive perspective.

Here are five of the fastest MLB players ever, along with the info about their greatest rookie cards.

5 Fastest MLB Players Ever and Their Rookie Cards

Any fan will be able to name some of the fastest MLB players of all time, but are their RCs collectible? 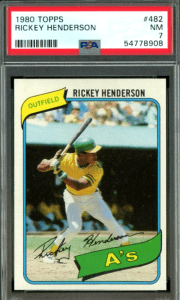 If you’re talking about pacey players, Rickey Henderson has to be included in the discussion.

Of course, his speed plays a major role, as explained by former MLB scout Charlie Metro;

“I did a lot of studies and I found that it’s impossible to throw Rickey Henderson out. I started using stopwatches and everything. I found it was impossible to throw some other guys out also. They can go from first to second in 2.9 seconds, and no pitcher-catcher combination in baseball could throw from here to there to tag second in 2.9 seconds, it was always 3, 3.1, 3.2. So actually, the runner that can make the continuous, regular move like Rickey’s can’t be thrown out, and he’s proven it.”

The self-proclaimed GOAT also has one of the most expensive rookie cards from the decade.

The Henderson RC is found in the 1980 Topps release, with only 25 copies having achieved a gem mint grade from PSA. 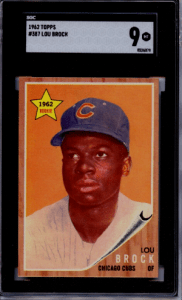 Lou Brock (1939-2020) held the career record and single-season record for stolen bases after a 19-year MLB career in which he’s remembered for being a six-time All-Star and a two-time World Series winner.

His pace was somewhat under-appreciated at the time, and it was Brock’s all-time stolen base leader record that was eventually beaten by Henderson in 1991.

Sadly, he passed away in September 2020.

The one and only Lou Brock rookie card is part of the 1962 Topps set. Framed with a brown border and a wood effect, the Star Rookie features a great profile shot of the player in a Cubs cap.

There’s a ‘1962 Rookie’ logo in the top left corner, while it has a deep orange background. 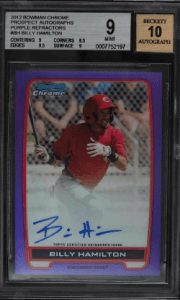 Next up is Billy Hamilton. There’s no denying he flies through the air at a ridiculous pace, and he’s arguably the fastest man to make the list by a margin.

Seeing him in the flesh is typically enough evidence of his speed, while Statcast didn’t ‘track anyone who gets to his destination faster than Hamilton’ in a 2016 review of the fastest MLB players.

Hamilton’s 2012 Bowman Chrome is his most popular RC by a fair margin. As a more recent release, there are lots of colored parallels to be on the hunt for, although they aren’t especially valuable. 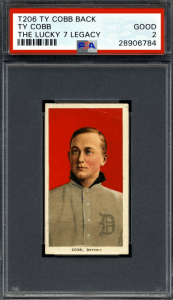 Another player known for his pace was the legendary Ty Cobb.

Take 1909 The Sporting News survey which asked 12 major league managers and coaches who they thought were the 5 greatest all-around baseball players who ever lived;

“Cobb is the fastest man I have ever seen, I never thought he could have that much speed. I heard a lot about Cobb, and how fast he was, but he surprised me by the speed he showed on the bases in the World Series.”

Cobb’s four RCs are all found in the famous T206 set. There’s a green and a red portrait card along with a ‘Bat off Shoulder’ and a ‘Bat on Shoulder’ variation.

Over a century old, the T206 collection is one of the more important sets for hobbyists, and card prices will vary significantly depending on the version and the overall condition. 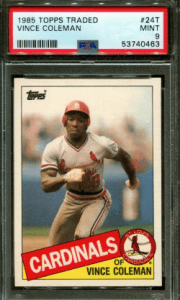 Vince Coleman is undoubtedly one of the fastest players to grace the sport. An MLB.com report looking at the best stars from the era has this to say;

“When the Cardinals drafted Coleman in the 10th round in 1982 (three rounds after they selected Terry Pendleton), he decided baseball would be his sport. There was one major problem with Coleman as a baseball player, though: He absolutely could not hit.”

Coleman was still named as the NL Rookie of the Year in 1985 and was a two-time All-Star during the latter stages of the decade.

His RC is found in the 1985 Topps Traded Baseball set. (Cards are numbered with a ‘T’ to help differentiate Traded cards from the flagship 1985 Topps release.)

The Coleman RC isn’t particularly valued by collectors, even when looking at gem mint versions.

5 Fastest MLB Players Ever and Their RCs: Summary

Invariably, this list of the fastest MLB players doesn’t necessarily contain five world-beaters, as pace alone isn’t enough to compete with the best in the world.

For example, it won’t mask poor hitting, but it will give a player a significant offensive advantage over the slower competition.

There’s a reason why the tradition of recruiting players based on their 60-yard dash running speed is still used in MLB tryout camps.

Given the age of many of the cards, we’d advise sticking with graded versions where possible, especially as there are numerous fakes, forgeries, or altered cards on the market.