Ezekiel Elliot aka Zeke played college ball at Ohio State, where he earned second-team All-America honors in 2015 and swelled fear into the hearts of safeties when he broke past the initial line of defense (which was early and often). 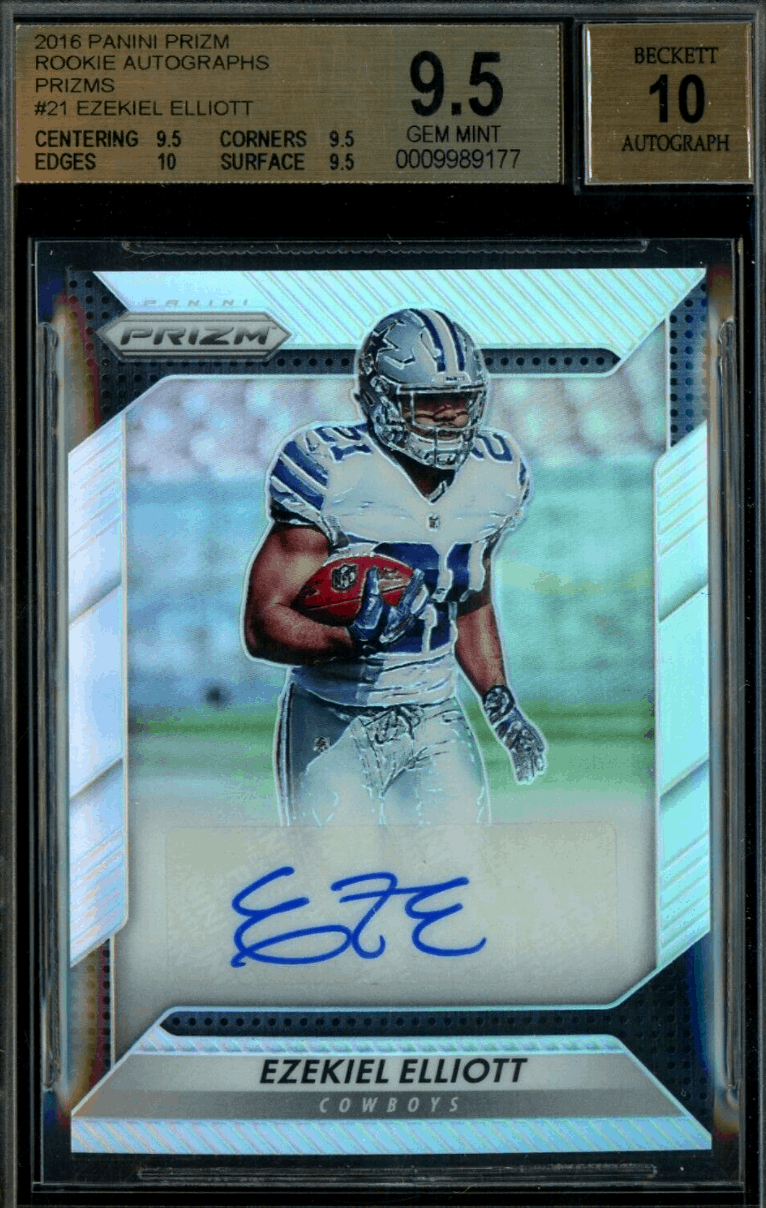 Ezekiel Elliott (7/22/95 ) was drafted by the Dallas Cowboys with the 4th overall pick in the 2916 NFL Draft. He is a beast of a running back standing 6 ft tall and clocking in at 230 pounds.

Things are looking bright as Elliot is in his prime, has a pro-bowl QB in Dak Prescott, and a rookie wideout who has a super high ceiling in CeeDee Lamb… this offense is loaded for bear and should come up humming on all cylinder.

Being a 4th overall draft pick there is not a shortage of Ezekiel Elliot rookie cards to pick from.

Let’s take a look at the top Zek rookie cards for investment purposes. 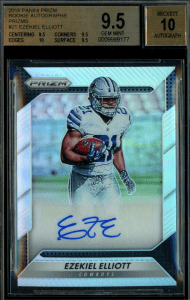 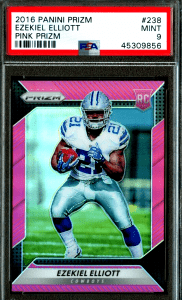 Here is your best bet when it comes to Zeke rookie cards… the 2016 Ezekiel Elliot Prizm rookie card is widely available and should drive the rest of the Zeke RC market.

Numbered #21 the card shows Elliot with the pigskin during what appears to be pregame warmups.

Numbered #238 the card shows Zeke juking a defender out of his shoes while holding the ball his right hand.

The reverse of the card reads “On the shortlist to win Offensive Rookie of the Year honors, Elliot entered the 2016 season topping another prestige list. Based on sales reported from April 1 through June 30, the former Ohio State and current Cowboys player beat out teammate Dez Bryant and other NFL stars for most jerseys sold“. 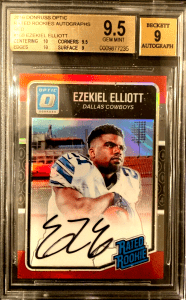 Another nice Zeke rookie card that rivals the Prizm and is honestly our favorite Elliot rookie card.

Numbered #168 the card shows Ezekiel with a stern ass look on his face looking to eat some linebackers for a late Sunday brunch… yum!

The reverse of the card reads “In 2014, the Cowboy’s blueprint for success involved a heavy run game to help control the football. After some struggles in 2015, Dallas tabbed Elliot to upgrade their gritty, ground-and-pound attack. His vision and running style should lead to bug numbers behind arguably the best offensive line in the NFL“. 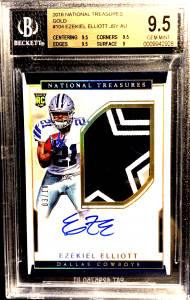 Better come loaded if you want the Zeke National Treasure rookie card as this card is one of the most expensive of his rookie cards if not the most.

Numbered #104 the card shows Zeke with the ball in his left arm while showing off the White Dallas Cowboys jersey. Best of all the card comes with an autograph and a game-worn patch… cha-ching cha-ching!

The reverse of the card simply shows his vitals along with the wording “The enclosed player-worn material and autograph are guaranteed by Panini America Inc.” 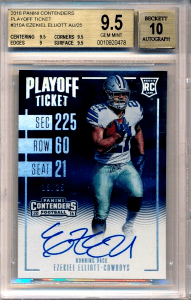 Here is a Zeke rookie card for those looking to spend a little more money vs the Prizm and Optic rookie card but not spending as much vs the 2016 Panini National Treasures Ezekiel Elliott RC #104 Auto Patch /99.

Numbered #310 the card shows Elliot with the pigskin in his right hand while breaking away from the pack… all aboard the Zeke train the photo screams!

The reverse of the card reads “If the Cowboys want to return to the success of their 2014 season, they must run the ball effectively. Elliot serves as the missing piece to an offense that wants to follow its top-rated offensive line and bully opponents for huge gains. He should be the focal point of a Dallas rushing attack loaded with depth“.

This card didn’t quite make our list of the top three Ezekiel Elliot rookie cards but it’s still worth mentioning due to its rarity. 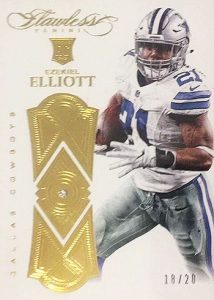 This Elliot card comes from the Panini Flawless set, which instead of arriving in packs comes in a briefcase.

This card is luxury embodied and while it does not have an autograph or jersey patch, it does have a small diamond embedded in the card.

On top of the diamond, it was limited to a print run of just twenty cards.

Overall this card is one of the most high-end products available in the industry and would be worth a look at from many collectors though its high price will keep it unavailable to many. 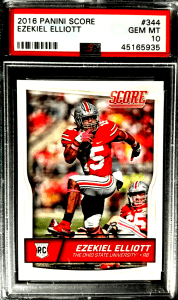 Ezekiel Elliot rookie cards are valued correctly as he hasn’t had much playoff success as of yet.

Please email us at value@goldcardauctions.com with your Zeke rookie cards if you would like an estimated value of the card. 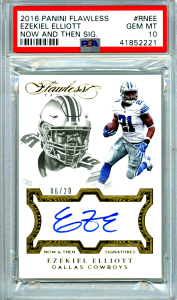 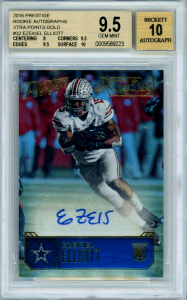 If Zeke can make it to the NFC Championship Game or even better the Superbowl his rookie card prices would see a nice price jump (assuming he is a big part of getting to these games).

We feel the Cowboys are ready to take the next step and make a deep run into the playoffs. Dak Prescott is an underrated QB as he ranked 4th in ESPN’s NFL Total QB Rating which incorporates all of a quarterback’s contributions to winning, including how he impacts the game on passes, rushes, turnovers, and penalties.

Dak, Zeke, and CeeDee plus the massive offensive line should be ready to win and win big.