Evan Mobley’s NBA career is booming, and collectors are taking notice. On that note, welcome the unveiling of the top five Evan Mobley rookie cards, embracing his two most valuable cards and how his rookie cards will fare from an investment standpoint. 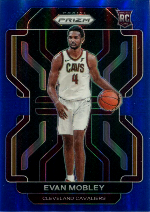 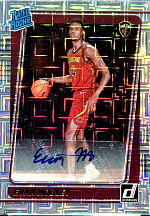 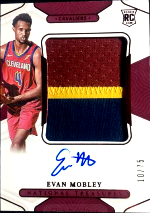 After capturing two straight California Gatorade Player of the Year Awards, Evan Mobley came to the spotlight at Rancho Christian High School in Temecula, California. Moreover, he was the number one overall recruit from the class of 2020 and ultimately chose to compete at the University of Southern California.

On July 29, 2021, the Cleveland Cavaliers selected the 7’0″ center as the 3rd overall pick in the 2021 NBA Draft. In his highly anticipated NBA debut on October 20, 2021, Mobley nearly posted a double-double with 17 points and nine rebounds.

All but one of Mobley’s rookie cards appear from the 2021-22 Panini Chronicles Draft Picks set, which came out on September 29, 2021. The set highlights critical rookies from the 2021 NBA Draft in their college uniforms.

A great buy at a cheap price.

The In-Flight Signatures Gold Vinyl parallel is also home to Evan Mobley’s most valuable rookie card. We will discuss it shortly.

In his lone year at USC, Mobley led the sixth-seeded Trojans to the Elite Eight while averaging 16.4 points, 8.7 rebounds, 2.4 assists, and 2.9 blocks per game.

Despite Mobley’s Donruss Optic Rated Rookie Gold Vinyl parallel card not being autographed, it’s his second most valuable rookie card from the set. We’ll delve into why later in the article.

Evan Mobley’s Panini Instant rookie card appeared in the Incoming Class, featuring the top NBA prospects. Panini Instant base cards are typically open for sale for a specified number of days, with print runs determined by how many collectors purchase the card.

However, parallel cards are limited, varying from 50 cards down to one copy. Evan Mobley’s third-best card is his Panini Instant Incoming Class rookie card serial-numbered 1-of-1.

At the moment, Mobley’s Blue Flux parallel autographed rookie card serial-numbered to 49 is his most desirable card from the Flux Rookie Autographs checklist.

Mobley has started every game for the Cavaliers through the first 11 games of his NBA career while recording 34.4 minutes per game. Mobley has also flirted with a double-double in the early going, averaging 14.9 points, eight rebounds, 2.5 assists, and 1.3 blocks per game.

While the highly talented center may only be 20 years old, the Cavaliers praise him highly, evidenced by the four-year $36.6 million contract they offered him this summer.

As of Wednesday, November 10, Evan Mobley has the second-highest odds of capturing the NBA Rookie of the Year. Thanks to his impressive burst onto the scene and his 26-point game on November 7 (leading all rookies as the highest-scoring game thus far), the value of Evan Mobley’s rookie cards has immense potential.