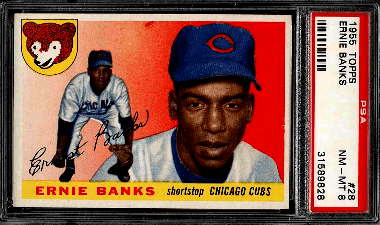 Voted the “Greatest Cub Ever” in a 1969 Chicago Tribune fan poll, Ernie Banks (1931-2015) is one of the best baseball players for investors who are willing to spend big on vintage cards.

Here’s everything you could possibly need to know about Ernie Banks’ rookie card, as well as investment advice if you’re interested in vintage options from the mid-1950s.

There’s only one Banks RC, which has led to increased interest and prices that have risen over the past decade. 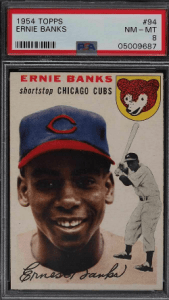 The only recognized rookie card for Banks is joined by Hank Aaron’s RC in the 1954 Topps set.

An iconic card, it features a large colorful profile shot of the player on the left, with a smaller black and white image on the right. There’s a large Cubs logo at the top, along with a facsimile autograph at the bottom.

It has a great design, but the price tag stems from the rarity, as well as the lack of further RC options.

Age is an issue, while the white background can easily show print defects. Centering is another common flaw, leading to higher grades being exceptionally valuable. 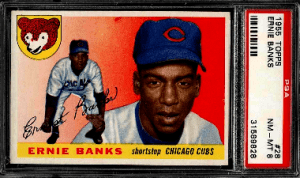 Released a year after the RC seen above, the 1955 Topps card is more affordable, although it’s still worth checking out.

The ‘55 Topps has a similar design to the RC, with two images of Banks on the front, along with a Cubs logo and a facsimile autograph.

However, this time the card is flipped horizontally, allowing more space for each section.

The red background and yellow name tag always catch the eye, making it another memorable option. 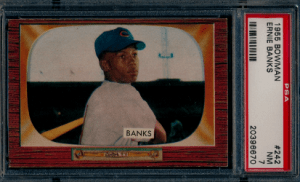 Finally, Bowman included Banks in their 1955 set, which has a brown border design that is meant to look like an old school TV set.

An image of Banks on the plate is found in the middle, with a small box containing only his surname.

Given the unique border, cards from the set are extremely prone to chipping, and there are only five PSA 9 graded versions according to the registry.

The Banks RC is almost 70 years old, and it’s not like you have much choice if you want a copy of his very first card.

It’s unsurprising to see that prices have risen over the last few decades, especially after he sadly passed away in 2015.

The ‘55 options are great if you’re looking for a graded vintage Banks card and you’re operating within a tight budget, although they pale in comparison to the original Topps release.

Whatever the case, we’d stick with graded copies to avoid any forgeries.

It’s definitely one of the better baseball cards from the decade and looks certain to be a steady long-term investment option.