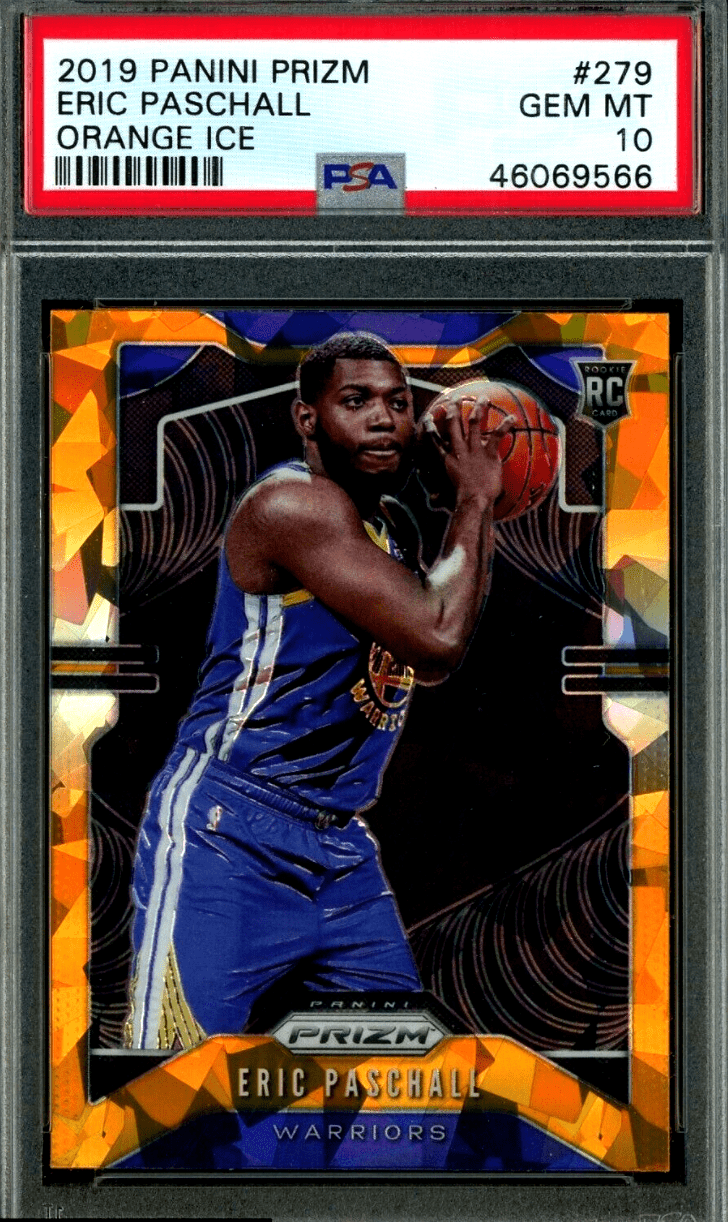 Eric Paschall (11/4/1996) was drafted by the Golden State Warriors with the 41st overall pick (2nd Round) in the 2019 NBA Draft. Paschall is a 6’6 ft 255-pound Poward Forward who excels at scoring on the move, has enormous strength and quickness on top of an outstanding work ethic… due we dare say “high motor”.

The Warriors hit the jackpot with Paschall, scoring on a 2nd round pick is extremely hard to do in the NBA. Plus the Warriors should receive a high 2020 NBA draft pick with a healthy Stephen Curry and Thompson coming back in 2020… watch out Western Conference they are down but not out by any means.

Despite being in the top 5 in 2019 rookie of the year betting odds, some NBA executives appear to be still cautious in regards to Paschall and we can see why given 40 other players were taken before him.

We feel another full year is needed before we are ready to buy in 100% to Eric as a potential NBA All-Star BUT imagine if he somehow was named the NBA Finals MVP a year or two from now… don’t laugh at this is a real possibility considering the veterans he will have running the floor with him! (you can take his Rookie Ticket, National Treasures, and Flawless RPA card prices and multiply them by 10 or 20)

So without further ado here are the best Eric Paschall rookie cards for your investing dollar. 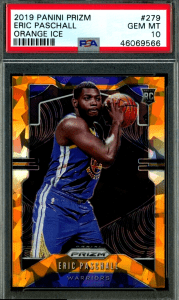 The Paschall Prizm (Read: Best 5 Prizm Basketball Cards) base card is a safe bet if you’re looking to dip your toes into the Paschall rookie card market as it comes at a super affordable price for all collectors.

Numbered #279 the card shows Paschall with the basketball looking to move it up the court with a determined look on his face.

The reverse of the card reads “Warriors fans will be the first to tell you Draymond Green was a second-round pick in 2012. He has since developed into one of the most complete players in the NBA, and the team is hoping Paschall will follow that same path. The 11th pick of the second round in 2019, the Villanova forward has a world of potential”. 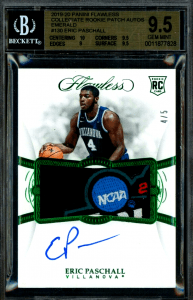 Number #130 the reverse of the card reads “Villanova faced Kansas in the 2018 Final Four, and Paschall entered the contest hungry and ready to show the world his shotmaking ability. In a near-perfect effort, the swingman chewed up the Jayhawks by tallying 24 points on 10 – 11 shooting from the field and helping the Wildcats to a 95-79 victory“. 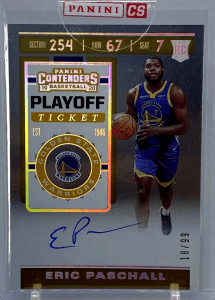 Another high-end Paschall rookie card that should cost around the same amount as the Flawless mentioned above. The only thing missing vs the Flawless is a game-worn patch… but to be honest we value the autograph much more than some dirty ass patch :).

Numbered #139 the reverse of the card reads “Whether he was squaring his broad shoulders to the basket for a jumper or dipping them for a drive, Paschall proved to be too much to handle at Villanova. The Warriors are eager to take advantage of his offensive versatility, and the Golden State fans are just as eager to cheer on his explosive finishes“.

We are on the fence in regards to Paschall for the time being and look forward to seeing him in action in 2020.

Hit us up at value@goldcardauctions.com with any of your Paschall rookie cards.

As we mentioned earlier we would like to see another full year of Eric before we make any major investments in his rookie cards.

His future is looking bright considering his current numbers on top of the fact that he will be playing with Stephen Curry and Clay Thompson… then again this could work against him as his scoring numbers would likely take a hit with the two stars getting more looks at the basket… but then again those are the same guys who might get him an NBA championship ring which would increase the value of his rookie cards... time will tell.

We bought one of his rookie cards to date (base Prizm) and have no problem with you doing the same… just don’t go nuts for the time being.