Eric “The Great” Lindros was the “must-have” card for every kid who grew up in the late ’80s and early ’90s. Only the Ken Griffey Jr. 1989 Upper Deck Rookie Card is burned into my memory more than the Eric Lindros Future Super Star rookie card.

Eric Lindros (2/28/73) was drafted by the Quebec Nordiques with the 1st pick in the 1991 NHL Draft. Lindros made an immediate impact in his first year putting the biscuit in the back of the net 41 times to go along with 34 assists for a mind-blowing 75 points.

WAS being the keyword as he never really seemed to be the same player after Scott Stevens DESTROYED his soul with this crushing hit below.

Now we’re not going to say Lindros did not have a good career… but great? We don’t think so and we can only wonder what could have been without the injuries and that soul-stealing hit. Regardless of the hit, his rookie cards are still popular with collectors and a good buy for investment purposes.

Let’s take a look at his top rookie cards for investment purposes! 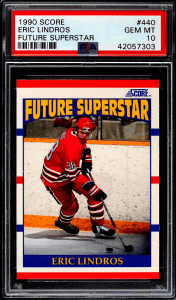 This is the go-to card for Lindros investors and is burnt into thousands of kids’ brains who came to age in the 90s’.

The card show Lindros skating with the biscuit deciding to pass or make a charge towards the net.

Lindros averaged more than a point per game as a rookie and he was only 19 years old at the time!… yep this kid was bound for greatness.

Our Take: If we only had the option of buying one Lindros rookie card this would be our bird. 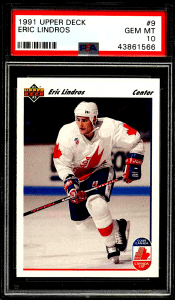 Upper Deck burst onto the scene as a major player in the card game in the late 80s’ and attacked the hockey card companies as well!

For whatever reason Upper Deck missed the opportunity to create a Lindros Young Gun card and decided to print just a standard Lindros rookie card (shown above).

Even though they missed the chance to make Lindros a Young Guns card we still like this card for investing purposes.

Card Info: Numbered #9 the back of the card reads “The presence of Lindros on Team Canada’s roster marks the first time that a player without NHL experience has suited up for the home side at a Canada Cup

Our Take: Not as solid as an investment as the Lindros Future Superstar RC but nonetheless a good card to add to your investment portfolio and should gain value at a moderate rate over the years (buy only PSA 10 grades). 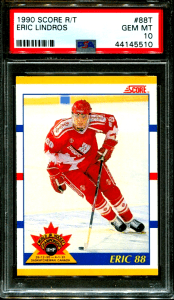 We forgot about this card until we began researching the article and honestly the 1990 Lindros Score Traded maybe be 1A to the Lindros Score Future Superstar rookie card.

This is a very underrated Lindros rookie card and we love it as a sneaky good investment.

The card shows Lindros in Team Canada knittings, charging up ice, looking for the puck.

Card Info: Numbered #88T the back of the card reads “Eric seems to collect medals and championships like some people collect spare change. For the second consecutive year, he led Canada to the gold medal in the World Championship…”

Our Take: As we mentioned this card is really undervalued (in our opinion) and should show moderate to good gains over the upcoming years. 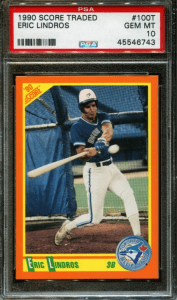 The 1990 Score Traded Eric Lindros baseball card is numbered #100 and shows Eric taking batting practice with the Toronto Blue Jays (Vlad Jr. Rookie Cards are a Must Own!).

A pretty cool card to be honest that we wouldn’t mind having in PSA 10 grade at the right price.

The Eric Lindros baseball card value is difficult to determine due to lack of sales at high grades but for PSA 10 grade, we would pay between $12 to $15.

Just as Lindros was arriving on the scene hockey cards were at their peak of popularity and in some years even outsold baseball cards in the early 90s’.

Lindros rookie cards should see mostly moderate but in some cases good gains over the next 20 years.

Got a Lindros rookie card and would like to know what it’s worth? Email us a few pics to value@goldcardauctions.com.

Please include a minimum of 2 photos (back and front) and allow up to 72 hours for a response. 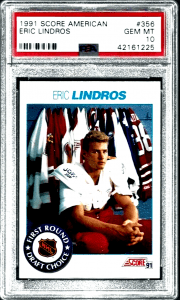 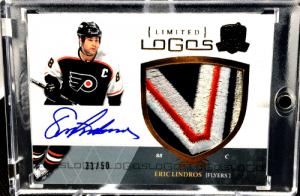 Eric Lindros was a great player in the first half of his career but the second half… not so much.

Many speculate it was the Scott Stevens hit that changed who he was as a player and we tend to agree.

If not for injuries Lindros may have been one of the best players of all-time instead of just a good player.

As we stated previously Eric Lindros rookie cards however remain popular with collectors and should only grow in popularity as kids that came to age in the 90s’ reenter the hobby.

We have no problem picking up a few of his rookie cards for your sports card investment portfolio… we actually bought his Superstar card a few months ago and are now keeping an eye out for that Score Traded in a PSA 10 grade.