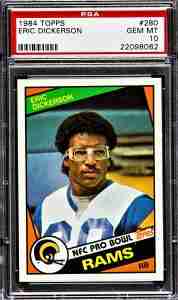 Eric Dickerson is currently an NFL analyst, but if you followed football in the 80s, you knew him as one of the best running backs in the league. However, before his great NFL career, he spent four years in college.

Dickerson spent four years at Southern Methodist University. He made an All-American first-team in his final season after making a second-team in his junior year.

Following his college career, Eric Dickerson was drafted second overall in the 1983 NFL Draft by the Los Angeles Rams. Dickerson spent five years with the Rams before he was traded to Indianapolis in a blockbuster deal.

He spent five seasons with the Colts before leaving. However, at that point, he had regressed significantly and had just two seasons left. He spent the first with the Los Angeles Raiders before going to Atlanta for his final season.

Eric Dickerson made five All-Pro First-Teams in his career and was the offensive player of the year in 1986. Additionally, he was the NFL rushing touchdowns leader in 1984. His impressive career led to his induction into the Pro Football Hall of Fame in 1999.

With all that in mind, many collectors are interested in adding Eric Dickerson’s rookie card to their collection.

Dickerson played at a time when sports trading cards are not as prominent. However, while many players of that era had only one rookie card printed, that was not the case for Dickerson.

Instead, he had several cards printed before and during his first NFL season. Here we will look at three of the best Eric Dickerson rookie cards to see which ones are the best investment options.

Although there are a few cards that were printed during his rookie season, this Topps card stands out as the most popular Eric Dickerson rookie card by far. It is Dickerson’s Pro Bowl card.

The card features Dickerson in his blue and white Rams uniform. He is not wearing his helmet in this picture but he is wearing his signature goggles.

The card has a tilted frame surrounded by orange. However, the background of his name is green.

The bottom of the card shows a Rams helmet, his position, the Topps logo, and it reads “NFC Pro Bowl Rams.”

On the back of the card, you can read about Dickerson’s incredible rookie season. It discusses his Rookie of the Year win and shows his statistics. 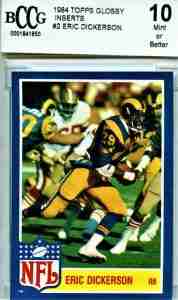 This next card is also from Topps as they were the biggest trading card manufacturer at the time. The card has a blue border this time.

During the 1984 season, you could open a 1984 Topps pack and get one insert. In total, 11 stars were featured on the inserts, with Dickerson and Dan Marino being the most valuable.

There are a few things that make this card stand out. Firstly, it has a glossy texture, which is different from other options. Secondly, it is slightly thicker than most trading cards. 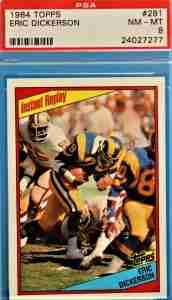 The two cards above are generally considered the two most valuable Eric Dickerson rookie cards. After that, there are a few other options, but we like this one the most.

This card from Topps has a red border and features Dickerson pushing upfield with the ball. He is in his blue and yellow Rams uniform.

The back of the card tells you exactly which game the card’s picture is from. It is from a Rams vs 49ers game on October 23rd, 1983.

Most trading cards for legends of the game have already plateaued in value. However, that is not the case here.

Despite his impressive career, most Eric Dickerson rookie cards can be purchased for less than $100, even in peak condition. While they sometimes sell for more at auctions, they do not usually exceed $600 or $700.

If you want to get the estimated value for an Eric Dickerson rookie card, email us or comment below. Make sure that you include two photos of the card in your inquiry.

Eric Dickerson cards are still relatively cheap, and as a result, they are interesting investment options.

You can purchase high-quality cards for less than $100, giving you the option to buy in bulk.

While his career will not change in the coming months, Dickerson was named to the NFL 100th Anniversary All-Time Team in 2019. As a result, his cards could rise in value over the next few years.

When Was Eric Dickerson a Rookie?

Dickerson was a rookie for the Las Angeles Rams in the 1983 NFL season.

Which Eric Dickerson Rookie Card is the Most Valuable?

Did Eric Dickerson Ever Win a Super Bowl?