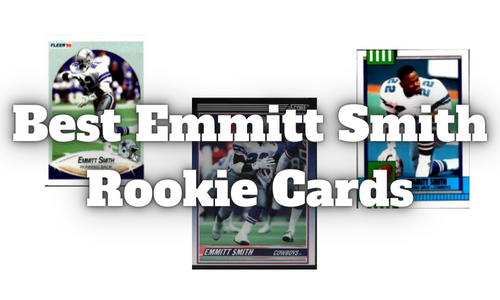 Emmitt Smith is the current NFL all-time rushing yards leader as he rushed for an impressive 18,355 yards during a long accolade-filled NFL career.

Smith would lead the league in rushing four times during his first six seasons in league and would go on to have an extremely long career considering he played a position that usually chews players up and spits them back out.

Smith spent the first 13 seasons of his career playing for the Dallas Cowboys and was a part of three Super Bowl-winning teams during his time in Dallas.

For the final two seasons of his career, he would play for the Arizona Cardinals in what was a rather forgettable final stop in an impressive career.

Smith was the definition of a workhorse running back as he would rush the ball 4409 times over his illustrious career, the most in NFL history by a wide margin. Second place on the rushing attempts list is Walter Payton at only 3838 attempts, a difference of almost six hundred carries. Smith and Jerry Rice are the only two non-kickers to ever score over 1000 points in their careers, making it one of the most exclusive clubs in NFL history.

Smith had five rookie cards made of him that are well-known today, but we have limited it down to the best three and an investment outlook. 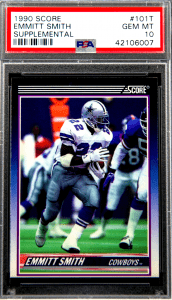 This card may be the most widely recognized Emmitt Smith rookie card produced. It pictures him running away from the divisional rivals’ New York Giants defenders, which he did often and successfully throughout his career.

For investors, this card is currently the most expensive of all the Emmitt Smith rookie cards and offers solid potential upward. The all-time leading rusher has five different rookie cards, but this is the one that currently goes for the most. 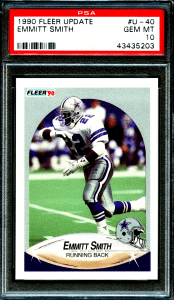 This card features Emmitt Smith with his arms out as he is ready to receive a handoff from his quarterback. He has his head up, scanning the field, looking for a hole to burst through.

1990, the year this card was released, was a good time for the sports card industry as it was nearing an all-time high. Demand was increasing, and the card-producing companies were developing innovative ways to satisfy that demand and please customers.

Into Breaking Open A Fresh Box?: Check out our Top Hobby Boxes of All-Time!

Fleer printed this card onto some higher-quality card stock than the norm at the time; thus, this card was popular at the time and remains popular today. As an investment option, this card has quite a high population, according to Professional Sports Authenticators, and thus may not be the card that will see massive returns.

However, it is a solid choice that can be found for a reasonable price, and for an investor looking to acquire a rookie Emmitt Smith card without blowing the bank, it is a great option. 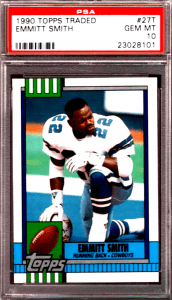 This card pictures Emmitt Smith as he stretches and kneels in one of the endzones before a game. Smith has one hand on his helmet as he looks towards the sideline, mentally preparing himself for the game. 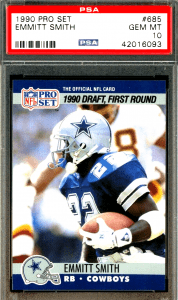 While Emmitt Smith’s rookie cards will not be a more speculative investment that could offer crazy returns, owning a card or two from the NFL’s all-time leading rusher will never be a bad idea.

Emmitt Smith not only holds many of the rushing records for the NFL, but he dominates them. His margin over second place for most of his different records is immense and with the NFL becoming increasingly pass-happy, there is no end in sight for Smith’s records.

Smith put together a combination of longevity and success that is extremely rare in a sport as brutal as football and even more rare at the running back position. His legacy will stand for many years, and he has been immortalized in the Pro Football Hall of Fame and the College Football Hall of Fame.

There is never an issue with owning a football card of one of the game’s true legends, and Emmitt Smith is no different. The fact that he played for the Dallas Cowboys, “America’s Team”, only helps his fame and cannot hurt the value of his cards.