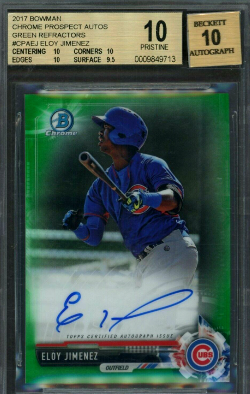 When Eloy Jimenez signed his six-year $43 million contract with Chicago White Sox in 2019, it included two more option years to bring the total deal valuation to $75 million. It was notable because it made this contract the richest ever for a player with no service time ahead of his Major League debut.

The White Sox readily invested all that money in the then 22-year-old Dominican left-fielder, confident they would get solid ROI in the future. Given the early returns that have come in, it’s looking like they have indeed made the right call. No. 74 has solidified himself at the top of the line-up in one of baseball’s most exciting and entertaining offenses.

The five-tool player claimed a 2020 Silver Slugger award as he showcased his baseball intelligence, elite speed, and top-tier gap-to-gap power. While the Sox had a very disappointing showing in the 2021 MLB postseason, you cannot blame that on Jimenez, who hit .308 in the series and finished second on the club in RBIs for the ALDS.

Jimenez, the player, seems to be an excellent investment, especially for a guy who signed with the Chicago Cubs in July 2013 for a $2.8 million signing bonus. However, how would one rate the investment value of his autographed cards?

Let’s take a look at the best/most valuable signed issues out there.

One of the older issues that you can find for Jimenez this pictures him in a uniform from when he was in the crosstown Cubs’ system. Jimenez played with three different Cubs minor league clubs until July of 2017, when the team traded him, Dylan Cease, Matt Rose, and Bryant Flete to the Chicago White Sox for José Quintana. Sure it was a short-term vs. long-term kind of deal, reflecting the needs of both clubs at the time, but it’s safe to say who honestly won that deal, and rather decisively, now.

A diffractor card like this is undoubtedly a unique technology that makes for a jam-packed issue with a lot of color clashing going on. Honestly, I think it’s too much, a bit over the top. However, the hefty price tag that accompanies a card like this reflects the high demand for it. That said, it’s still an exceptional and fascinating design, and I have to give much respect to any card that has a whole lot going on, as this one most definitely does.

We couldn’t make this list and not cover a card from the Field of Dreams game, which was indeed a spectacle. While yes, the game was ridiculously over-exposed and over-analyzed, with the television broadcast degenerating into a Kevin Costner the individual brand infomercial, it was still an incredible backdrop.

And that means any card connected to it will be highly sought after, which is undoubtedly one. It commemorates Jimenez hitting a go-ahead three-run-homer into the cornfield before teammate Tim Anderson would later connect on the walk-off game-winner. It’s a beautiful card, capped off by a piece of a base used in the marquee showcase game. This card is one of my favorites, as it has a lot going for it- a throwback, classic uniform, a piece of game-used equipment, and an autograph!

It’s interesting how you have a man who is synonymous with wearing his jersey with the top couple buttons undone, with some gold chains, yet none of his major autographed cards seem to have captured this visage. It is his look, but for whatever reason, none of his most special cards have caught him in a moment like this.

In this card, you have some exciting things going on in the background, a modern art pattern that seems to evoke stained glass, maybe even the famous Marc Chagall windows at Chicago’s Art Institute. I can’t say for sure, but that’s likely not a coincidence. A couple of modern buildings and lush trees also backdrop a smiling, sunglasses-clad Jimenez looking up as he is seemingly heading back from the outfield.

The autograph is understated and perfectly placed, as not to command too much attention from the eye. This issue has “Bold” in the title, which is the perfect way to describe the card. It is an expensive-looking rookie card, and that is reflected in its price on the open market.

It’s certainly rare to find a card quite like this, one that features both of the Sox 5-tool young stars/superstars in the making. Signed by both phenoms, with the term “spark of light” emblazoned on the front, it’s a very eye-catching issue that does a fantastic job centering and balancing the visual stimuli and imagery.

The gold border complements the gold autographs, exceptionally well and it’s a hue that works very nicely with the black. A short print card from the Luminaries set, it’s a rare find and a gem of a card. If you’re trying to collect both players, then this is the issue you need to have. It will set you back a pretty petty, no doubt about it, but it’s worth it due to the scarcity and originality.

So are these cards a good call for ROI? Well, it all depends on how much you believe in Jimenez to stay on the upward trajectory/positive learning curve. The 2016 Futures Game MLB All-Star has lived up to the hype so far and looks more boom than bust.

Of course, questions abound about whether or not Tony LaRussa is the man to lead this team of young promising stars in the making long term or not. Can the outdated manager relate to these young bucks? And if not, does it matter all that much? The Sox are poised to dominate the AL Central for the foreseeable future, and that means more postseason appearances, and with that, many opportunities for Jimenez to be an October hero.

If/when he is, expect his signed, scarce, premium issue cards to see a rise in value.