Manning was a number one overall selection and thus there were plenty of rookie cards made picturing him.

Which ones are the best and what does the investment outlook look like for Manning? Keep reading to find out. 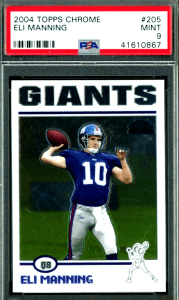 Eli Manning is the youngest quarterback that the NFL has seen from the legendary Manning football family.

Manning’s dad, Archie, played for the New Orleans Saints and his older brother is Peyton Manning, the legendary quarterback that played for the Broncos and Colts.

The Manning family is known for the amazing quarterbacks that they have produced and we may be seeing more from younger Manning generations in the future.

Eli Manning refused to play for the San Diego Chargers, the team that had the number one selection during his draft year and orchestrated a trade that sent him to play in New York City for the Giants.

He would play his entire career in New York City and help the Giants to some very successful seasons.

Manning would end his career with two Super Bowl rings, both against the legendary duo of Bill Belichick and Tom Brady and their fearsome New England Patriots.

In their first Super Bowl encounter in 2008, the Patriots entered the game with an 18-0 record and were looking to become only the second team in NFL history to finish an undefeated season.

However, Manning would lead a great game-winning drive and the Giants would upset the Patriots, handing them their first loss of the season.

Manning would receive the Super Bowl MVP award and etch his name into the football history books with this historic upset.

Education: How Much Should You Invest Annually In Sports Card?

Manning seemed to come up big when the spotlight was on the brightest and will be remembered for his Super Bowl victories.

Manning’s number ten is retired by the Giants and even though he struggled at times with issues such as throwing too many interceptions, he will forever be remembered as one of the great New York athletes.

Let’s check out the best Eli Manning RC for your investment portfolio. 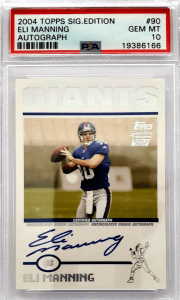 This card is one of the more expensive Eli Manning rookie cards and for good reason.

The card features an autograph placed below an image of Manning throwing the football and was limited to only 299 copies.

This is one of the premier Manning rookie cards and thus would be a good hold for any collectors looking to add some Eli Manning cards to their collection. 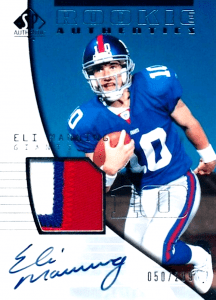 This card is one of the more valuable Eli Manning rookie cards and features an image of the quarterback tucking the ball under his arm and running.

While the card may not have an image of Manning as visually appealing as him winding up to throw a deep ball, it is a great choice for collectors with its autograph, patch, and limited quantity.

With all three of those unique aspects, this card would be a great choice for investors and if you are a believer in Eli Manning than this could be a key part of your collection for the future.

Topps Chrome is a popular set and one where the cards can usually be found for reasonable prices.

Of course, with this being a less luxurious card the upside will be lower on the investment but that doesn’t mean the ROI will be smaller.

Hence, this is not always a bad thing as it means the initial risk will be smaller.

For novice investors, this could be the card of choice.

If you would like an estimated value on a Eli rookie card please email us at value@goldcardauctions.com (please include at minimum 2 pictures).

Manning is currently retired and will not be coming back to play barring a very unexpected return.

His legacy is set as one of the greatest Super Bowl quarterbacks of all time and someone who you could always count on when it mattered the most.

The New England Patriots had one of the greatest dynasties in any professional sports yet they fell twice to Manning and his Giants.

Getting a card graded? Read this first!: PSA vs BGS vs SGC

As with any great dynasty the Patriots had plenty of people who loved to watch them fail and those same people admire Manning for taking the Patriots down.

With a legion of Manning fans, investing in these cards could be a great option, but with Manning’s career over and him unable to reach too many new heights in the football world, Manning should not be expected to be an investment with massive returns.

While it is still unclear if Manning will be inducted into the Hall of Fame, he does boast some strong accolades that help his case.

If he were to be inducted into Canton, he could see another rise in popularity that causes the prices of his cards to go up.

If that does happen, you’ll be happy if you owned some of the cards mentioned above.