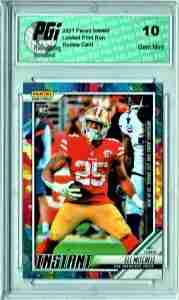 The best time to invest in rookie cards is when players like Elijah Mitchell are very young.

If you wait until a player is a star player or in the hall of fame, you will not have much of a chance to get a return on your investment.

So, today we are going to look at Elijah Mitchell, the young running back for the San Francisco 49ers.

Before getting drafted, Mitchell spent four years at the University of Louisiana at Lafayette. He performed very well over the course of his college career, playing 42 games, and rushing for 3267 yards and 41 touchdowns.

When draft day came around, Mitchell was selected in the sixth round, 194th overall, of the 2021 NFL Draft by the San Francisco 49ers. He swiftly signed a four-year rookie contract on May 13th, 2021.

Mitchell played well in his first season, appearing in 11 games, rushing for 963 yards, and scoring 6 touchdowns.

Based on off-season moves made by the 49ers, it looks like Mitchell is going to get a chance to be the 49ers’ number 1 running back next season.

This change in fortune for Mitchell could have a dramatic effect on the value of his rookie cards.

Here we are going to take a look at the most valuable Elijah Mitchell rookie cards on the market. Mitchell is still early in his NFL, and as a result, there is a lot of potential value in his cards.

However, for now, they are not very expensive. Even the most expensive cards are very cheap.

Here you will find all the information about the top three Elijah Mitchell rookie cards. We will describe what they look like in detail, and we will provide investment advice for you for each card.

The first Elijah Mitchell rookie card that we want to look at today is this one from the Panini Instant collection.

The interesting thing about the cards in this collection is that they are printed during the season.

They are still classified as rookie cards, but since they are printed during the season, they can use an image of the player in an NFL game.

In the case of this card, it shows Elijah Mitchell celebrating with the ball after a run. He is wearing his red 49ers jersey and white pants. However, the best part about the card is that it has an autograph at the bottom of it.

There are several versions of this card, but the version with a black border is most valuable because it is one of a kind. 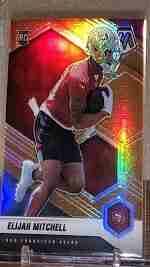 This next card is also from Panini, but it is a traditional rookie card. It shows Mitchell in what appears to be practice gear as he carries the ball in a drill.

It has a honeycomb Prizm background that gives the card a unique feel. Additionally, the card has the “RC” logo on the front, along with his name and team.

The back of the card provides an analysis of how well Mitchell matches with the 49ers. Additionally, it shows his stats in his last season at Louisiana. 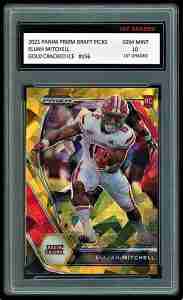 The final card we are looking at today is also from Panini. This card shows Mitchell in his white Louisiana gear as he carries the ball upfield. It has a gold Prizm background that makes it aesthetically appealing.

While this card is not as valuable as the previous two options because it shows him in college gear, it is still a solid investment option.

Mitchell is still early in his career, and as a result, there have not been many opportunities for his cards to jump in price. As his career progresses, it is a safe bet to assume that his cards will increase in price.

Elijah Mitchell is a good player who is already outperforming his draft stock. As a late-round pick, not much was expected of him in his rookie year.

However, Mitchell is already getting the opportunity to be the number one running back for the 49ers in his second season.

As a result, there is a great chance that his cards will increase in price this season, and over the course of his career.

If you are looking to invest in rookie cards, this is a great time to invest in Elijah Mitchell. He plays for a good organization that should perform well in the future, and his future as a player looks bright.

How Much is an Elijah Mitchell Rookie Card Worth?

Mitchell is still a young player, and as a result, the value of his cards vary greatly. However, they can usually be bought for double digit prices.

When Was Elijah Mitchell's Rookie Season?

Mitchell was drafted in the 2021 NFL Draft and debuted that season for San Francisco. He appeared in 11 games in his rookie year.

Is It a Good Idea to Invest in Elijah Mitchell Rookie Cards?

There's no guarentee that Mitchell will have a good enough career to provide a solid ROI for investors. However, he is off to a good start to his career and is an interesting investment option.