Edgerrin James was drafted by the Indianapolis Colts in the 1999 NFL draft as a first-round, fourth overall pick.

The running back would go on to play in Indianapolis for 7 seasons, and then moved on to the Arizona Cardinals for 3 seasons, before rounding off his career with a season in Seattle with the Seahawks.

He was selected for 4 Pro Bowls and led the NFL in rushing yards twice. He was inducted into the Pro Football Hall of Fame in 2020.

James made an immediate impact in his rookie season, starting all 16 games and producing a league-high 1,553 rushing yards and 13 touchdowns.

He also added an impressive 62 receptions for a further 586 yards and another 4 touchdowns… obviously he was named the NFL Offensive Rookie of the Year.

Let’s take a look at some of the best Edgerrin James rookie cards for investment purposes.

The James version of this card features a classic SP Authentic design, with a gold and white crescent on the left which contains all the usual details, and James posing in full uniform on the right.

With just a limited print run of 1999, and now over 20 years old this card very rarely makes it to market in top condition.

When it does the brand name, rarity and nice looks can see it go for a lot of money.

This E-X card that celebrates the turn of the millennium is a great-looking piece of cardboard.

It features James running with the ball in Colts uniform and has a nice grey and blue theme to it and a unique style and layout that really works.

When this card shows up in top condition auctions can really take off, and it can fetch way into the triple figures on a bad day, and even more on a good day.

This was really towards the start of promising rookies being given a lot of autographed cards in their first season, hence why this is the only signed piece to make the list.

The rookie ticket has become very popular in recent years and always has a great look with the ticket to the left and the player to the right. The autograph as usual overlaps James’ legs.

The boom in popularity of this set means that you will now have to pay a big fee to get your hands on any version, and that is especially true for the James version. 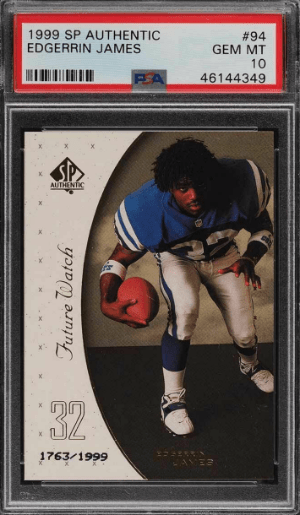 If you need advice in regards to buying an Edgerrin James rookie card please email us at advice@goldcardauctions.com. 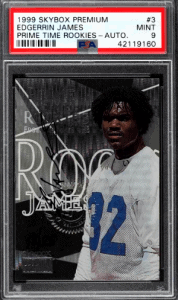 Despite now being retired for over a decade, James’ list of individual NFL achievements is enough to ensure his name remains relevant in the NFL.

Couple this with his recent Hall of Fame induction, and he is a player that is not going anywhere despite no longer being involved in the pro game.

This all bodes well for his rookie card value, which should remain solid and maybe even grow a little over the years.