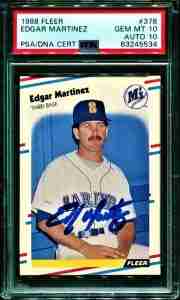 Edgar Martinez is a former professional baseball player and coach. He had a tremendous career with the Seattle Mariners. His performances earned his induction into the National Baseball Hall of Fame in 2019.

Martinez was born into a Peurto Rican family and fell in love with baseball after watching Roberto Clemente in the 1971 World Series. However, he was not a sought-after prospect.

Many scouts saw him play because he played with his cousin Carmelo Martinez, but they were not impressed with Edgar. As a result, he was not drafted.

However, his semi-professional team recommended that he try out for the Seattle Mariners. He almost missed the tryout after a long night working in the factory, but they liked what they saw and signed him to a contract on December 12th, 1982.

After several years in the minor leagues, Edgar Martinez made his MLB debut on September 12, 1987. He went on to play 13 games that season, batting .372.

In 1992, Martinez made his first all-star team and led the league in batting average. Unfortunately, the next two years of his career were hindered by injuries.

However, once he came back healthy, Martinez proceeded to make six more all-star teams from 1995 to 2003. Martinez won the Silver Slugger Award 5 times from 1992 to 2003.

Additionally, he is one of 18 MLB players to record a battering average of .300, an on-base percentage of .400, and a slugging percentage of .500 in 5000 or more plate appearances.

Like most players of his era, Edgar Martinez does not have as many rookie cards as players today. However, he played late enough to have a few notable rookie cards for us to look at.

We will be looking at our three favorite Edgar Martinez rookie cards. These are some interesting investment options, and one of them has a pretty fun story attached to it.

The first Edgar Martinez rookie card we are going to look at today is from Fleer. Fleer is a respected trading card company in the world of sports, and as a result, it should not be a surprise to see one of their cards at the top of our list.

This card holds decent value as it is the most sought-after Edgar Martinez rookie card. It features Martinez in his while Mariners uniform as he is sitting in the dugout. There is a blue background with a white border.

What really makes this card stand out is that it comes with an autograph across the front. The autograph was written in a blue sharpie.

The back of the card features Martinez’s stats throughout his career in the minor leagues from 1983 to 1987. 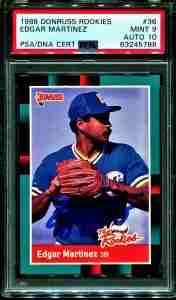 We mentioned above that one of the Edgar Martinez rookie cards we would be looking at has an interesting story attached to it. Well, here is the card.

You might be thinking that this looks like an ordinary card, and while that is true, it has one grievous error.

This is an Edgar Martinez rookie card, but it does not actually feature Edgar Martinez. The player you are looking at is Edwin Nunez, a reliever for the Mariners at the time.

After all, they did not have Google to look up what every player looked like. Still, it is a pretty bad mistake.

Since there is a unique story associated with this card, it is an interesting investment option. 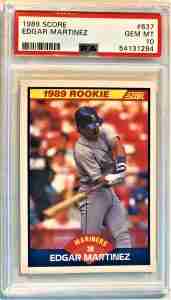 The final rookie card we are looking at today is from Score. Here you can see Martinez swing the bat in his grey Mariners uniform.

His name and team are written across the bottom, and you can see the year and Score logo at the top of the card.

The back of the card has a long blurb about his background as a player and his minor league success. This card is a solid option for people looking to invest in a low-cost card.

The 1988 Fleer card can be purchased for less than $10 if it is not graded. However, when it is in perfect condition it can sell for over $500.

Near-mint copies of the Donruss card sell for a little over $10, whereas the Score card sells for over $30 in perfect condition.

Despite being retired for over 15 years, we believe that Edgar Martinez rookie cards are solid investment options. He was an elite player, but his cards have not reached the value of other elite baseball players.

However, the fact that Martinez was inducted into the Baseball Hall of Fame indicates that the value of his cards could rise in the coming years. Edgar Martinez also had his number 11 retired by the Mariners, which should contribute to the value of his rookie cards.

Even if they do not rise in value, they are low-risk options that can be purchased for cheap prices. Even the near-mint copies are relatively inexpensive.