Eddie Murray was born 2/24/1956 and was drafted by the Baltimore Orioles in the 3rd round of the 1973 MLB June Amateur Draft. He did not attend college and was drafted out of HS from Locke High School in Los Angeles, CA.

Like most older baseball players, Eddie Murray didn’t have as many rookie cards as we see today. So instead, we will check out his top 3 baseball cards from an investment perspective. 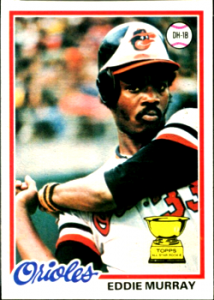 Eddie’s one and only rookie card. A great-looking card with the signature Topps rookie trophy in the bottom right-hand corner. The word “Orioles” is printed in blue cursive in the bottom left corner.

His only autographed card. We love this bad boy and would almost rather have it vs his rookie card… ALMOST.

Eddie Murray’s second-year card. Topps baseball cards were the be all end all in trading cards during the 1980’s and really still are today.

The 1978 Topps Eddie Murray Rookie Card should sell between $50 to $150, depending on the card’s condition. For an estimated worth of your Eddie Murray rookie card, please email info@goldcardauctions.com and include at minimum two photos.

Eddie Murray was one of the greatest hitters the game has ever seen and his rookie card/baseball cards should have no problem putting up an ROI equal to or better than the HoF players in his ERA.