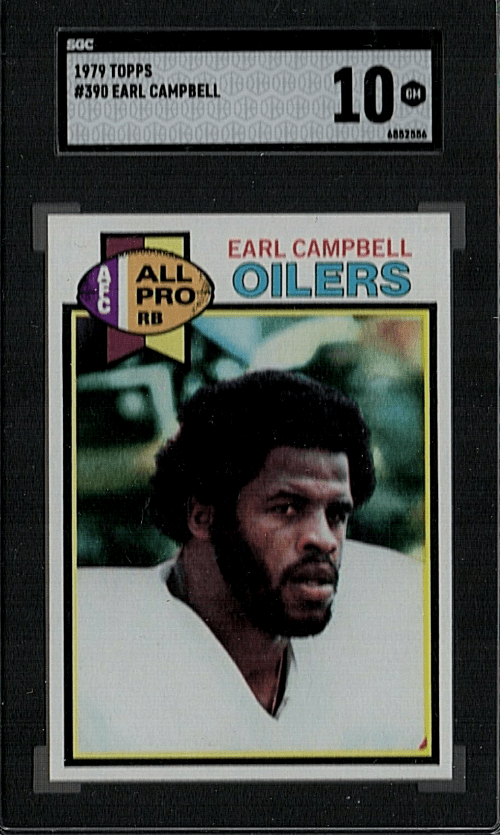 Earl Campbell (03/29/55) is a retired RB who was the first draft pick back in 1978. He played for the Houston Oilers and New Orleans Saints until 1985, and he achieved a lot in a short space of time.

He was named the NFL’s Offensive Player of the Year in each of his first three seasons, won the Rookie of the Year award, and was the AP NFL Most Valuable Player in ‘79.

Given the strength of his CV, we’ve come up with a list containing everything you could possibly need to know about Campbell’s RC options.

Campbell has a number of pre-rookie cards, but his association with Topps ended after 1979. Negotiations between the two parties broke down, and he never had another Topps card for the duration of his playing career.

Seen as Campbell’s definitive RC, the 1979 Topps is one of his most valuable cards that money can buy. It features a simple profile shot of the RB, staring towards the camera. His white shirt does blend into the background somewhat, giving it a bit of a ‘floating head’ appearance.

It has a thin yellow and black borderline, with a football-shaped space to note that he was an AFC All-Pro RB. Despite the simplicity, it’s difficult to find copies in decent condition due to the age of the card. 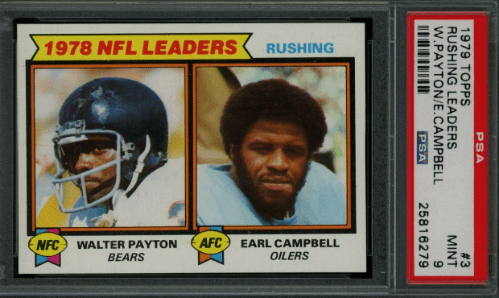 It’s nowhere near as collectible as the RC seen above, but this card is another Topps release that has Campbell on the front. He shares the NFL Leaders card with Walter Payton, who was regarded as one of the greatest running backs of all time. (Payton passed away before his time in 1999, following problems with a rare liver disease.)

You’ll find an image of each player on the front of the card, split into separate square boxes. Peyton is wearing a helmet, but Campbell is available to see in all of his ‘70s glory.

It’s worth a significant amount when looking at higher PSA grades, and it’s not like there are many other options from the era to choose from if you’re looking at Topps sets.

Versions such as the NFL Leaders aren’t bad either, even if they will never compare to the RC in terms of values or interest. It’s unsurprising to see that Campbell’s cards are some of the better releases from the last 1970s, and they look to be a solid investment in the long-term.