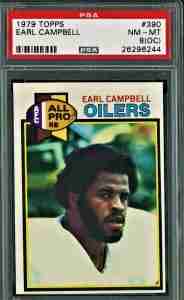 Earl Campbell is a former running back that had a short but successful career in the NFL. He only played in eight seasons, but in that time he built up an impressive resume.

Before entering the NFL, Campbell spent four years at the University of Texas. His college career culminated with a Heisman Trophy in 1977.

After winning his Heisman Trophy, Campbell entered the NFL Draft and was selected first overall by the Houston Oilers.

Campbell played a very physical style during his career, and as a result, he retired early to maintain his quality of life. However, during his career, he was the NFL MVP in 1979, and the Offensive Player of the Year for three straight years from 1978 to 1980.

After six and a half years with Houston, Campbell was traded to New Orleans where he spent his final season and a half in the NFL.

As a result, despite playing in an era when trading cards were less prominent, there are still a few Earl Campell rookie cards you can choose from. Here we will look at the best options.

At the time Earl Campbell was a rookie (1978), there weren’t many companies making trading cards. Topps dominated the industry, and as a result, all three of the cards we are looking at today are from them.

However, you should note that while there are three cards from Campbell’s rookie year featured below, the first one is considered the official Earl Campbell rookie card.

This card from Topps is the official Earl Campbell rookie card. Campbell’s image is surrounded by a yellow border, followed by a black border, and finally a white border.

The top of the card shows his name, team, and his All-Pro accolades. The image on the card itself is not exciting as it simply features the top half of Campbell in his white jersey. On the back of the ard, you can read a short blurb about Campbell’s rookie season. 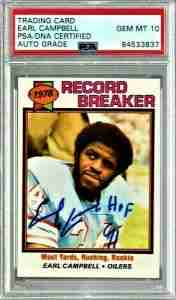 This Earl Campbell card was printed to commemorate his record-breaking rookie season. As a rookie, Campbell smashed the record for most rushing yards as a rookie with 1450.

The card itself features Campbell in his light blue Oilers uniform as he looks off to the side. The top of the card reads “1978 Record Breaker,” and the bottom reads “Most Yards, Rushing, Rookie, Earl Campbell Oilers.”

This card can be sold for a decent amount if it is in mint condition. There are also autographed copies like the one featured above which hold extra value. 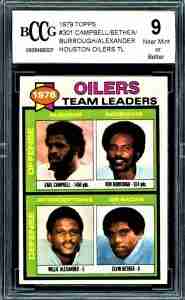 The final card we want to look at today is an interesting one because it is not an official rookie card. It features Earl Campbell as a rookie, but he is just one of four featured players.

The front of this card features Campbell, Ken Burrough, Willie Alexander, and Elvin Bethea. They were the Oilers’ team leaders in rushing yards, receiving yards, interceptions, and sacks in the 1978 season.

The back of the card has a checklist for Oilers rookies in the 1979 Topps set. Although this is not an official rookie card, it is valuable because not many were printed.

All of these cards have a solid value 40 years later when they are in good condition. While it is unfortunate that Topps and Campbell never reached an agreement to produce more cards, it means that the existing cards are more valuable.

If you want to get the estimated value of an Earl Campbell rookie card, you can contact us via email or comment below. Make sure that you include two photos of the card in your inquiry. 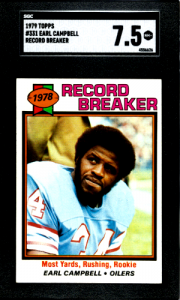 As we mentioned above, Earl Campbell and Topps never reached an agreement to mass-produce his trading cards. As a result, the cards that exist are very valuable.

His rookie card is his most valuable card, and in mint condition can still be sold for upwards of $500 at auction.

The only concern we have is that since these cards have been out so long that their value has plateaued. Regardless, it is unlikely that you will lose value buying these cards.

Which Earl Campbell Rookie Card is Most Valuable?

When Was Earl Campbell a Rookie?

Campbell was a rookie in 1978. He was the Offensive Rookie of the Year and see the record for most rushing yards as a rookie.

Unfortunately, Campbell never won a Super Bowl. His deepest playoff run was in his rookie season when his Oilers lost in the AFC Championship Game.