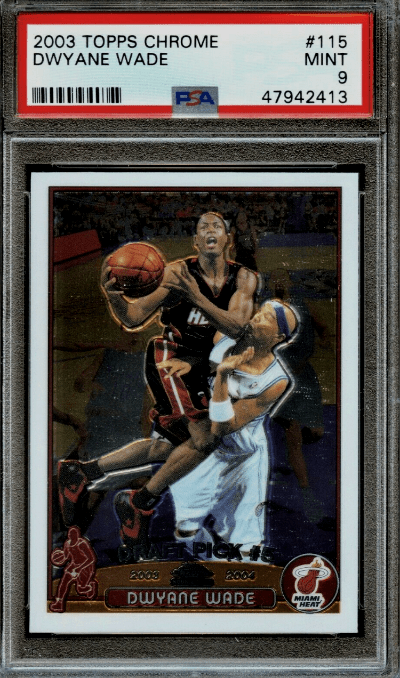 Wade played in 13 NBA All-Star games over his 16-season career and could have kept going, instead deciding to retire at the top of his game.

Here’s a roundup with three of the best Dwayne Wade rookie cards, looking at values, rarity, and their potential to provide good returns in the future.

Wade’s rookie cards were released during the 2003-04 season. There’s no shortage of options, with over 50 to choose from, including signed copies with low print runs.

Any questions or comments in regards to these picks should be directed to the comment section or visit the Gold Card Auctions Facebook Page.

There’s no better place to start than his 2003-04 Topps Chrome release. One of the most popular Wade cards you’ll find at auction, it has a great shot of the player as he dominates against the Magic.

There’s no sign of an auto or a patch, but it’s highly condition-sensitive and notes that he was Draft Pick #5 at the bottom. The set is probably best known for containing a LeBron James card which will easily sell for six figures when looking at the highest PSA/BGS grades.

“Value-wise, gem mint versions of the chrome Refractor parallel are definitely the ones to look out for.” 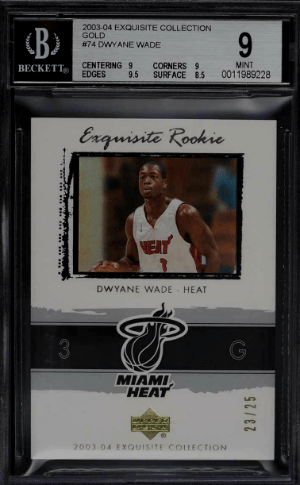 Another strong contender from his rookie year comes in the form of Wade’s signed Exquisite Collection card. The base version is numbered to 99 copies and features an on-card auto and a medium-sized player patch.

There’s a lot of blank space, but it’s still valued highly. There’s also a Gold parallel from the set, with a print run of 25. However, the Gold version doesn’t have a player patch or an autograph. 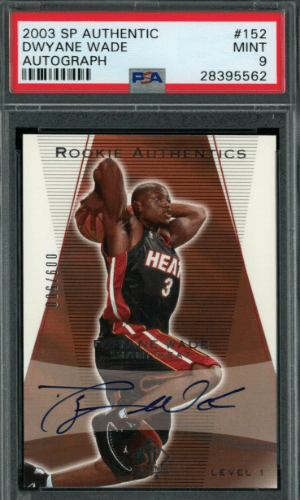 The final card to make the list is the 2003-04 SP Authentic. Wade is found in the Rookie Authentics subset, in a release that has been signed by the player. He’s shown mid-leap in a large action shot, while the card has silver chrome trim.

With 500 copies produced, it’s slightly more abundant than the card seen above, but there’s great potential for profit considering the lack of gem mint versions. As with the others, you’ll have to pay at least four figures to secure the very best versions. 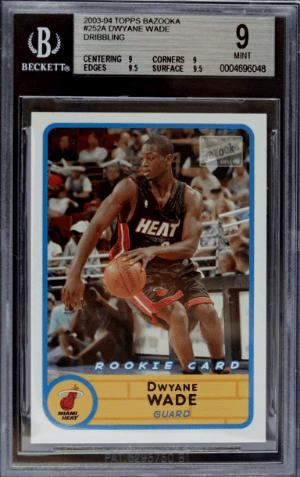 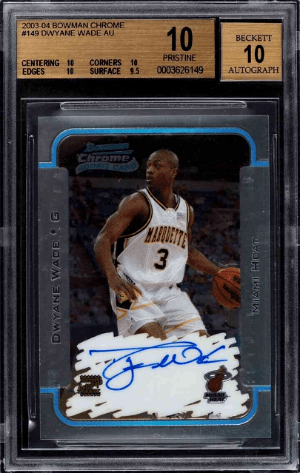 Looking to purchase a Dwanbe Wade RC and need advice? Email advice@goldcardauctions.com and we will be happy to help.

Wade is a lock for a spot in the Hall of Fame, as long as he manages to stay away from endorsing anti-Semitic remarks. In his defense, he later apologized, clarifying;

“I was too quick to respond without being fully informed about his hurtful anti-Semitic remarks, as you all know I have ZERO tolerance for any hate speech!”

Otherwise, it looks to be smooth sailing for the star. There should be a bump when he becomes a HoFer, while his RC prices are expected to rise accordingly over the next decade or so.

Despite current values, it’s fair to say that they might be a little underpriced, especially when looking at premium versions with low print runs. As such, his cards have to be seen as a pretty good investment option for the time being.