Dwight Howard was selected as the first overall pick of the 2004 draft by Orlando Magic, and big things were expected from the center.

He did not disappoint and has been selected for the All-Star game 8 times, as well as being selected the NBA Defensive Player of the Year on 3 occasions.

Howard has played for 6 different Franchises, and in 2020 won his first-ever NBA Championship with the LA Lakers.

Howard slotted straight into the Magic team in his rookie year and at a time where they were considered one of the worst teams in the league but started to help turn their fortunes around.

He started all 82 regular-season games, scoring 12 points per game from the center position.

Let’s take a look at the top-rated Dwight Howard RCs from an investment perspective. 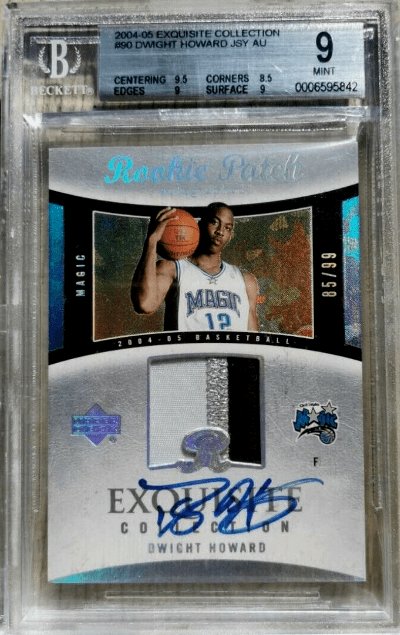 This card is undoubtedly one of Howard’s best and one of the best from 2004 in general.

It features Howard at the top framed on a blue camo like the background in Heat uniform holding a ball, whilst the patch is in the middle and the on-card autograph is at the bottom.

All of this and a limited print run of just 99, results in a card with a very high value, stretching well into the thousands of dollars.

Only the look few can own this card, but it is truly the icing on the cake of any collection. 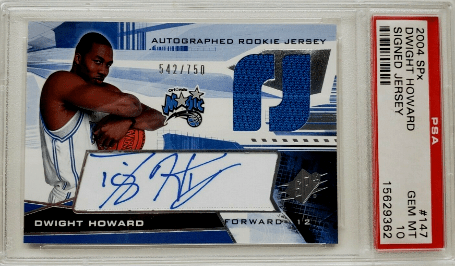 The design of this card is a bit of an acquired taste (is Dwight trying to make love to the ball?).

It is horizontally printed, with Howard clutching a ball on the left, the patch in the top right, and the autograph in a white box in the middle.

Pro-Tip: Buying hobby boxes is not the best investment but boy is it fun ripping them packs open… its OKAY to buy them ever so often but limited yourself and know it’s not a positive ROI.

There is a lot going on with the background, which makes the card unique but for some reason, it does not quite work and is a bit of an eyeful.

The card is serial numbered up to 750, so is expensive but not unreasonably so and within reach of most serious collectors. 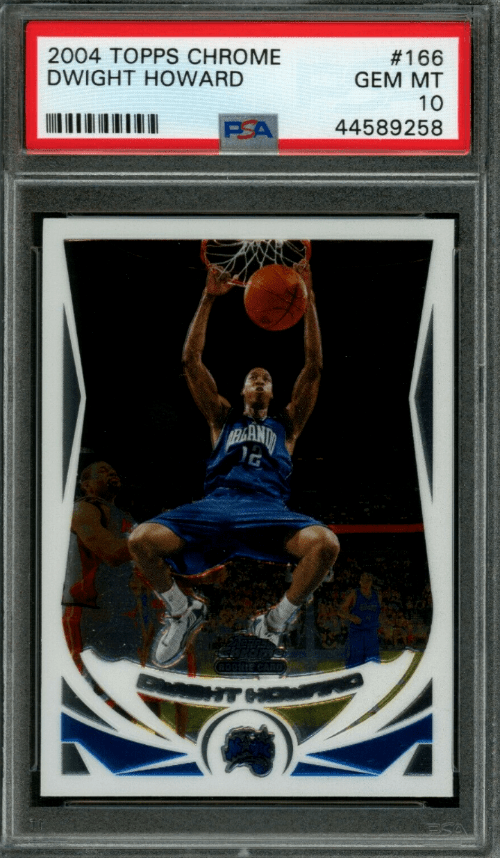 This is a great looking card, featuring Howard dunking in his blue Orlando Magic uniform on with a dark background that really stands out.

His name and team logo are centered at the bottom while the card is outlined in a white border.

There are plenty of these Topps and Topps Chrome Howard RCs out there for you to get your hands on, but they still do not come cheap. 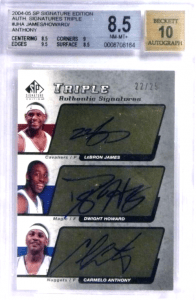 If you are looking to buy a Dwight Howard RC or any card for that matter and need advice please email us at advice@goldcardauctions.com and we would be glad to help. 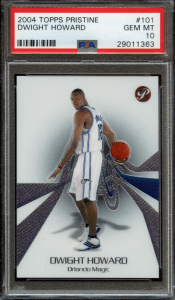 Howard’s rookie card investment right now looks as safe as ever but that still isn’t enough for us to recommend a buy.

However, currently playing in a star-studded LA Lakers side, he has a great chance to win more Championships.

He has also looked destined for the Hall of Fame ever since his rookie season.

If he wins another title with the Lakers we may upgrade his status to a soft buy.