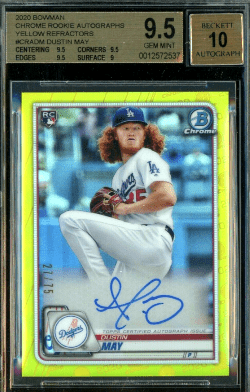 LA Dodgers pitcher Dustin May (09/06/97) is undeniably talented, and his 99 mph two-seamer has helped him to become the team’s No. 5 starters in recent weeks.

May pitched in two games of the 2020 World Series, working three total innings and allowing three runs to score on five hits.

It’s the perfect way to begin his MLB career and has led to increased interest in his RCs from collectors and investors as the player looks like he could be the real deal.

Here are three of the best Dustin May rookie cards on the market right now, along with investment advice looking at the next few years.

One of the more recognizable players due to his size and power, May has a variety of rookie cards that were released during the 2020 season.

The first card to make the list is found in the Chrome Rookie Autographs subset of the 2020 Bowman Baseball release.

It features a simple image of May preparing to pitch, while we’d focus on Refractor parallels if you’re aiming to turn a profit.

The inclusion of an auto at the bottom is one of the main reasons why it’s such a popular option, coupled with the strength of the Bowman brand.

May is one of a mix of 100 rookies and pros included in the set, which also includes an on-card auto displayed along with a diagonal tab across the middle.

“Once again, the refractor parallels are the most valuable versions, and sell for significantly more than base copies.”

An earlier option can be found in 2018 Bowman Chrome sets.

May’s Prospect Auto features an image of the player doing what he does best, as he prepares to put everything into a vicious pitch.

There’s an on-card auto at the bottom, and parallels come with serial numbers on the bottom right corner.

As a World Series champion at such a young age, the future looks bright for the powerhouse pitcher.

May seems to have secured a starting spot for the time being, as well as working to improve his curveball in recent months, adding elements to his game.

However, Trevor Bauer also has a solid argument to be included as the Dodgers’ starting pitcher, and only time will tell.

Despite his early achievements, May’s RCs have been disregarded in favor of more popular players when looking at recent sales prices.

This makes it the perfect opportunity to buy in, as long as you think he has a chance of fulfilling his massive potential over the next decade or so.