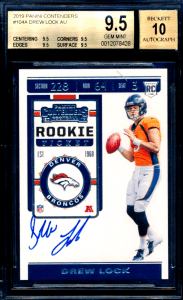 After missing out on a first-round pick due to perceived issues with his throwing accuracy and decision making, a strong rookie season was enough for the price of Drew Lock rookie cards to begin rising accordingly in the months that followed.

We’ve come up with three of the best Lock rookie card options, along with information about each one, and an investment report if you’re thinking about picking up a couple before prices increase any further.

Here are three of the best Drew Lock rookie cards for your investment dollar. 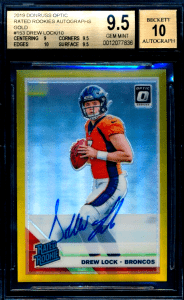 A bright and colorful option, the 2019 Donruss Optic set features ‘Rated Rookie’ Lock cards. They’re more polished than the base versions because of the chromium foundation which helps to catch the eye immediately.

The image features the player staring down the camera while he prepares to throw a football, wearing his Broncos jersey in a solid action shot.

The Rated Rookie autographed versions are what you should be looking out for, as they’re worth 4-5 times the price of the unsigned cards on average.

The 2019 Panini Contenders Rookie Ticket Autograph has an on-card signature, making it a great mid-range option.

Cards from the set are often seen as key rookie options from the year, while there’s a range of variations that use different photos compared to the main versions.

It’s great for collectors, who are always keen to complete a difficult set.

You’ll have to pawn your wife’s wedding ring for one of the rarest versions, but there’s enough choice to suit almost every budget.

At the higher end, the Cracked Ice version has a crazy camouflage background and commands a hefty four-figure price, which is 3-4 times that of the Red version.

It’s easy to see why the former is his most expensive, standing out from the crowd as his flagship card. 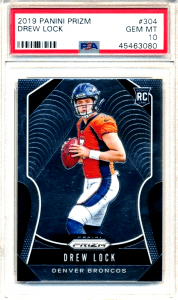 Part of the popular Panini Prizm set, Lock’s 2019 ‘Rookie Autographs’ is highly popular, and comes with an extensive list of parallels. It features the same image found with the Donruss Optic, while there’s an RC logo in the top right corner, adding further value.

It’s a great investment piece, with prices varying slightly depending on which parallel you’re looking at. For example, the Camo versions are worth roughly $100 more than a Red/Pink version, which is still worth good money.

How much should you invest in sportscards? 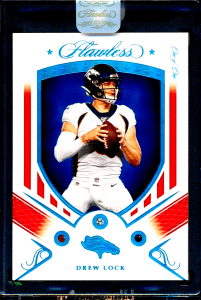 His rookie cards are slightly overvalued presently based upon many in the hobby predicting a huge second year but so are we so we don’t have a huge issue overpaying based upon future payout! 🙂

Email us at value@goldcardauctions.com if you would like a price estimate on any of your Lock Rookie Cards.

As we alluded to we believe Lock is in for a monster season and are loading up on his rookie cards… beep… beep… beep!

Lock is currently being talked up by almost everybody, including The Herd’s host Colin Cowherd.

Of all the second-year QB’s, he picked Lock as the most likely option to win an MVP award, which is high praise considering he’s up against the likes of Kyler Murray in 2020.

It’s easy to see why, as Lock has a cannon for a throwing arm, while he’s been talking to Peyton Manning in an effort to further improve in the offseason.

Patrick Mahomes and Lamar Jackson are two recent players who earned an MVP award in their second year with the pros, so it’s far from an impossible task.

If you want the best of the best, look no further than any of the National Treasures rookie cards. There are lots of mid-range options to go with the premium versions, but there’s more potential for profit if you go all out.

Having tied with legendary Broncos quarterback John Elway for the most franchise wins (4) by a rookie QB, it’s easy to forget he’s still got a lot to prove, and his entire career ahead of him.

Everything seems to be pointing to a successful career with the team built around him, barring a freak injury or another unforeseeable misfortune.

CTA – Are you going to grab a couple of rookie cards before prices explode, or are you planning to hold off until Lock’s second season is underway? You can check out other high-profile QB’s by using the search function or read our new list of the best sports cards to buy right now.