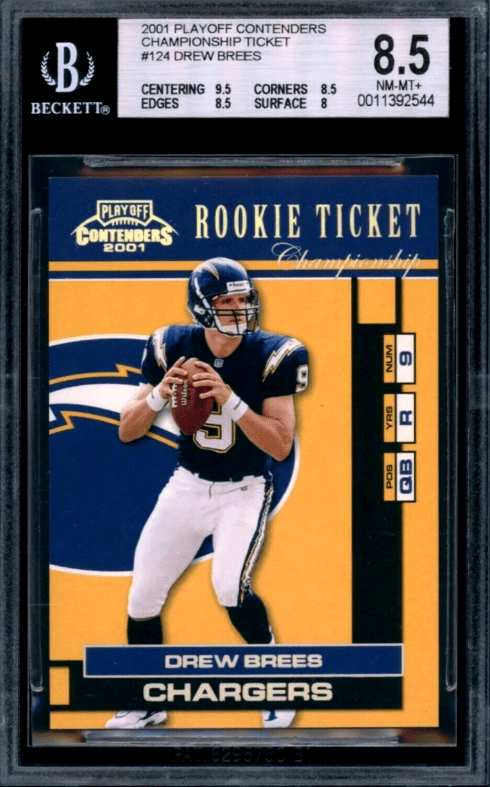 New Orleans Saints quarterback Drew Brees is one of the greatest signal callers in pro football history. He was drafted by the San Deigo Chargers with the 32nd pick in the 2nd round of the 2001 NFL Draft.

When you consider the fact Brees has bested the likes of Joe Montana, Johnny Unitas, Tom Brady, Peyton Manning, and Dan Marino in these statistical categories, it boggles the mind.

Read Alvin Kamara Rookie Cards… this kid was Drew’s honeypot over the last few years of his career.

Without further ado, let’s take a look at the top-rated Drew Brees RCs for investment purposes. 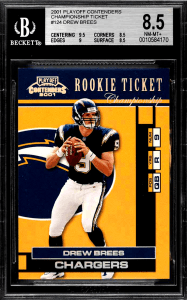 One can argue he’s as athletic as he was when the San Diego Chargers made him the 32nd overall selection in the 2001 NFL Draft.

If there’s one Drew Brees rookie card that should be on your radar, it’s the 2001 Drew Brees Playoff Contenders Rookie Ticket RC

The front of the card shows Brees in his Chargers home blue jersey scanning the field for an open receiver.

You can’t miss the blue and yellow rookie ticket in the background and his autograph at the bottom. It’s sports card eye candy at its finest.

On the other hand, the back of the card shows his college stats with the Purdue Boilermakers.

Our Take: Not only is the 2001 Playoff Contenders Drew Brees Rookie Ticket Card easy on the eyes, but it’ll also get you a hefty ROI in the future. 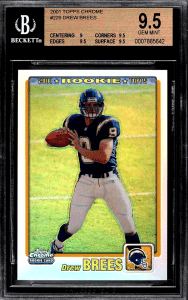 This is another Drew Brees rookie card that is worth your while.

Despite not having his signature, it still commands a hefty price on the market. You’re sure to get a nice return on this one.

The card shows Brees in the dark Chargers away jerseys looking to get rid of the football in what appears to be a possible sidearm throw.

A solid Drew Brees rookie card which should have a solid ROI for years to come… we own a couple of the refractor versions.

Card Info: Numbered #229, the back of the card partly reads, “The 2000 Maxwell Award winner as the nation’s top player, Brees capped a stellar career with a memorable senior season. A superb leader and fierce competitor, he has the intangibles to be a special player in the NFL.” 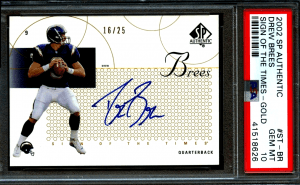 This card doesn’t have the flair as other Drew Brees rookie cards however, it’s still a solid investment.

You can see a photo of Brees scrambling for extra yardage on the front. The “Sign of the Times” label is superimposed on the photograph. He scribbled his autograph at the bottom.

The back of the card reads, “Congratulations! You have received a card personally autographed by Drew Brees. This trading card was sent to Upper Deck directly from Drew Brees.

This certificate expressly warrants the authenticity of the depicted athlete’s signature.”

That assurance from a respected sports card brand bodes well for your sports card investment portfolio. 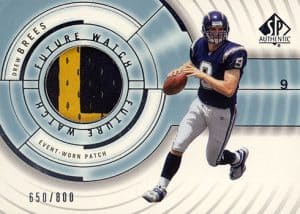 This Brees card pictures the quarterback in the dark blue Chargers jerseys, scanning downfield as he looks for an open receiver.

The left side of the card features a jersey patch which takes up a majority of the space on the card.

Overall this is a great-looking card and the addition of the patch, as well as the limited print run of just 800, helps it retain value.

For collectors looking to take it to the next level, a gold parallel is available that was limited to just 100 copies. 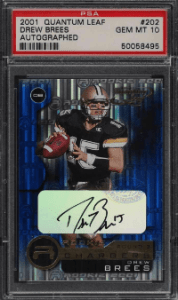 The value of a Drew Brees rookie card will be based on a variety of factors.

If you would like an estimated value of a Drew Brees rookie card please email us at value@goldcardauctions.com (include 2 photos at minimum). 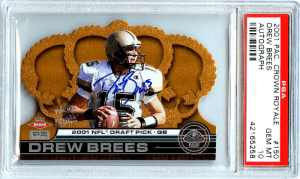 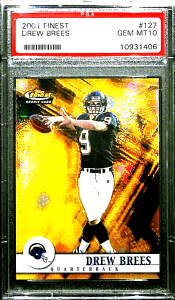 Simply put, Drew Brees is a living legend. He could set more NFL records before he hangs up his cleats.

There’s no question he will become a member of the Pro Football Hall of Fame in the not-so-distant future. He will join the ranks of Joe Montana, Tom Brady, Peyton Manning, Dan Marino, and Unitas as the greatest quarterbacks in the history of the NFL.

Read why Peyton Manning rookie cards are one of the best investments in the hobby!

For all these reasons Drew Brees rookie cards are a screaming BUY!