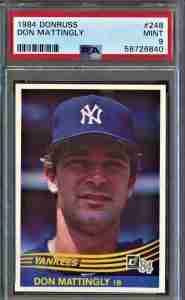 Don Mattingly played 14 seasons in the MLB, all for the New York Yankees. During that time he appeared in 1785 games and established himself as one of the best players in the league.

Mattingly was drafted into the MLB in the 1979 MLB Amateur Draft. He was not looked at as a future star at the time, and as a result, he was not selected by the Yankees until the 19th round.

However, Mattingly was not interested in going to college, and as a result, he signed with the Yankees immediately. He spent three years in the minor leagues before appearing in seven games in 1982. By 1983  he was a full-time player with the Yankees.

When he retired in 1995, Mattingly was a six-time all-star, nine-time Gold Glove Award winner, and one-time AL MVP. His number 23 was retired by the Yankees, making him the only Yankee to have his number retired without winning a World Series.

Since his retirement, Mattingly spent time as a coach for the Yankees and later the Dodgers. He was a manager for the Dodgers until 2015 and has been with the Marlins since 2016.

Now we will look at a few of the best Don Mattingly rookie cards. You should note that although he made his debut in 1982, his rookie cards were printed in 1984.

Many players that debuted before the 90s do not have many rookie cards. The reason for that is not as many companies were making trading cards at the time.

However, that is not the case for Don Mattingly as he has several rookie cards available for you to purchase. Here we will look at the three that we think are the best and most valuable options.

The first card we are looking at is not just the best Don Mattingly rookie card, it is one of the premier baseball rookie cards of the 1980s. It’s a simple Donruss card, but a classic one. It shows a headshot of Mattingly wearing a Yankees hat.

The bottom of the card reads Don Mattingly and shows his position (first base). The back of the card features Mattingly’s stats from his first two incomplete seasons in the MLB. It also has a short blurb featuring his highlights. 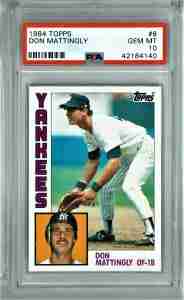 The next card we are going to be looking at has more of a classic look. Mattingly is getting ready to grab a ground ball as he plays first base. He is in his white Yankees uniform.

Additionally, the card features a headshot of Mattingly in the bottom left corner. “Yankees” is written vertically in large lettering on the left side of the card. Mattingly’s name and position are printed in the bottom right.

At the time of this card’s release, and for several years after, it was one of the most coveted cards from Topps. As a result, it remains a valuable option to this day. 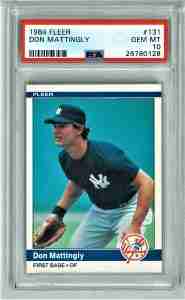 The final Don Mattingly rookie card we are going to look at today is from Fleer. It is similar to the Topps card in that it shows Mattingly in the fielding position. However, he is wearing a blue Yankees t-shirt on this card.

This card is the most affordable option of the three that we are looking at today. We will discuss the exact prices in the section below, but this is still an elite card.

It has simple white borders, and as a result, centering and condition are easy to assess. There are blue horizontal lines on the top and bottom of the card. The top reads “Fleer,” and the  bottom reads “Don Mattingly.” The bottom of the card also features Mattingly’s position and the Yankees’ logo.

Mint condition copies of the Donruss and Topps cards can sell for several hundreds of dollars. The Fleer usually sells for a little bit less, but PSA 10 copies still command a hefty sum.

Don Mattingly has been out of the MLB as a player for over 25 years. As a result, there has been plenty of time for the value of his rookie cards to settle. Nonetheless, they still good be solid investment options.

Additionally, Mattingly is still active in the MLB as a manager. If his teams have success while he is a manager, more people might be interested in purchasing his rookie cards.

If none of those things happen, we do not expect the value of his cards to drop much from where they are currently at. As a result, you will be able to recoup most, if not all of your value.