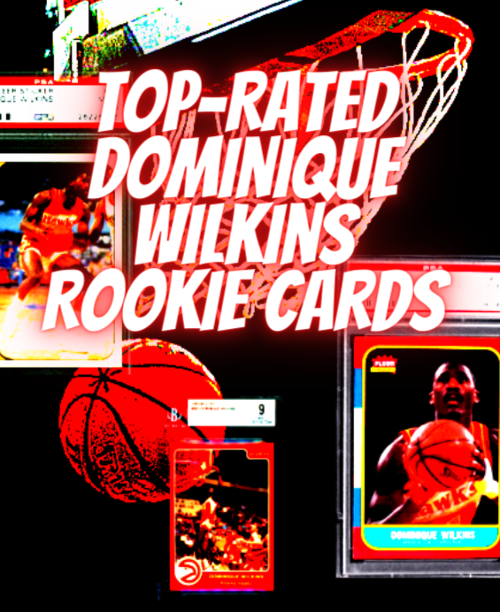 The Utah Jazz selected Dominique Wilkins 3rd overall in the 1982 NBA Draft and was subsequently traded to the Atlanta Hawks. He played his college ball at the University of Georgia.

Wilkins became known as a high-flying dunker, which may take some attention away from his all-around game.

Want a piece of ‘nique? These are some of the cards to target. 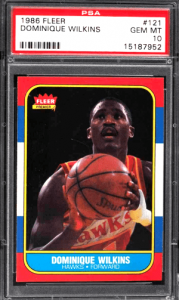 The 1986 Fleer Basketball set contains a smattering of memorable rookie cards, including that of The Human Highlight Film, Wilkins.

The card’s red, white, and blue border is immediately recognizable to seasoned collectors. It is the standard border for all cards in the set.

The on-card photograph features Wilkins at the free-throw line. He crouches in his 80s-era red Atlanta Hawks jersey, left hand wrapped as he prepares to shoot his shot.

Dominique’s mouth is open in concentration. Though it’s not the most exciting image (particularly by Wilkins’ standards), it’s enough to bolster this card as his premium rookie offering.

The remainder of the card’s design is simple, with a baby blue nameplate, Fleer logo, and rounded yellow sub-border.

The 1986 Fleer set is legendary for the number of prominent rookie cards it provides, and Wilkins’ rookie card benefits from this set’s iconic status.

With cards for other legends like Michael Jordan in this set, Wilkins is not the headliner. Still, his card is a major player. 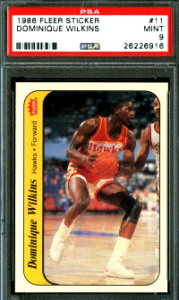 Though generally not as demanded as the 1986 Fleer Basketball #121, the 1986 Dominique Wilkins Fleer Sticker RC #11 can fetch a strong price.

It’s an image-focused card. Dominique sports the red Hawks jersey with yellow trim and a white nameplate where the “Hawks” logo is stitched.

The card shows what an absolute specimen ‘nique was. As he holds the ball in an athletic position with knees bent, his body seems to flex at every possible point.

The high white socks, white shoes, and thigh-high shorts are a touching tribute to 1980s basketball.

The card’s design features are few and far between. A vertical yellow nameplate on the card’s left side reads “Dominique Wilkins”, with “Hawks – Forward” in smaller font.

Must-Read: How Much Should You Invest Annually in Sports Cards?

The Fleer crown logo rests next to the nameplate text. A thin, rounded black sub-border separates Dominique’s photograph from the white outer border.

1986 encroaches on the Junk Wax Era, and cards were not particularly stylized. Still, simple can be appealing, and we believe that this card has strong visual appeal.

Some for-sale copies contain an autograph, which could further enhance the card’s value. 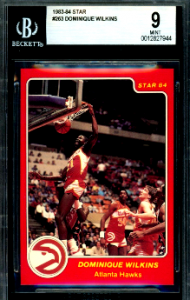 Selling for prices that are generally comparable to the Fleer Sticker, the 1983 Dominique Wilkins Star Basketball RC #263 is a card that any collector should consider.

It features a red-heavy design scheme. A vibrant, blood-red outer border is the backdrop for a lower nameplate, which reads “Dominique Wilkins Atlanta Hawks” in yellow text.

A lined white sub-border indents in the upper-righthand corner. On that indentation reads “Star 84” in small yellow font.

The image of Dominique dunking with his left hand is memorable. It typifies Dominique, who was known for his ferocious, spectacular slams.

Wilkins bites his lower lip, staring at the hoop as his NBA-long legs are exposed by tiny shorts. He rocks the red-and-white Hawks jerseys that the modern team has re-embraced.

A circular Atlanta Hawks logo sits in the lower-lefthand corner of the white sub-border.

Collectors have proven to pay a sizable amount for this card and may pay more as basketball cards continue to appreciate.

The most expensive Dominique Wilkins rookie card is the 1986 Fleer Basketball RC #121 while the Fleer Sticker and Star are fairly close in value.

Visit us on social media! Gold Card Auctions on Facebook and TikTok and get videos like these MJ GoldCardAuctions TikTok.

When it comes to Dominique Wilkins’ rookie cards, one term comes to mind: value.

Like many NBA players from his era, Wilkins may suffer from the fact that so many other NBA legends made their debut around the same time as he did.

The 1986 Fleer Basketball set alone shows how loaded Wilkins’ era was, as it’s headlined by a guy you might’ve heard of—Michael Jordan.

Still, we can’t help but feel that Wilkins’ large stature in NBA circles provides a strong price floor. And, considering that his rookie cards remain attainable for a few paychecks, they may prove to be high-value investments.